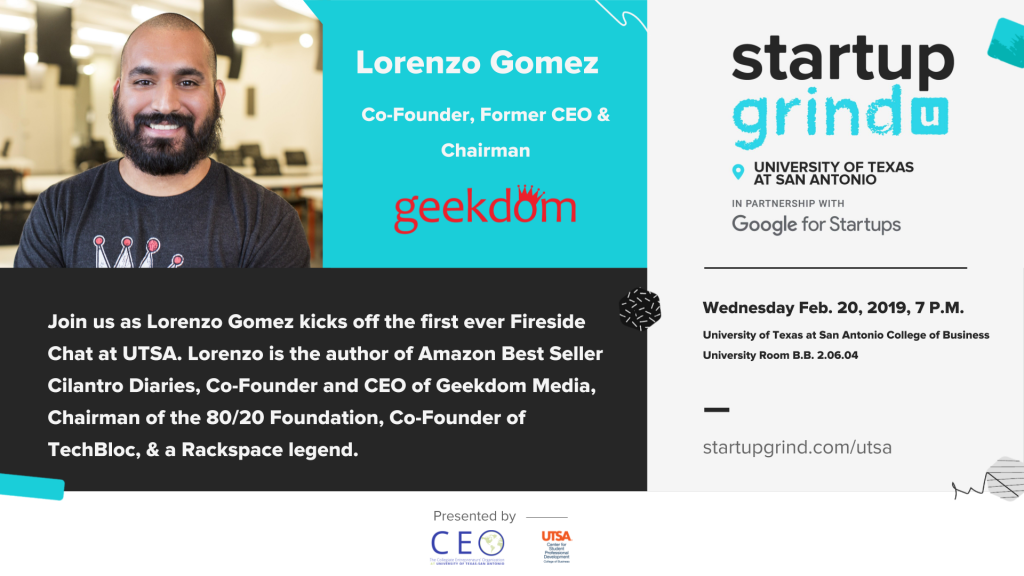 There is a new Startup Grind chapter in San Antonio, only this time, it is launching on campus at The University of Texas at San Antonio (UTSA).

Startup Grind UTSA will host its first event on February 20 at 7 p.m. at the university’s College of Business. The chapter is planning a fireside chat with guest speaker Lorenzo Gomez, author, chief executive officer of newly formed Geekdom Media, and chairman of Geekdom, one of the largest co-working spaces in Texas. Gomez will discuss how “everyone needs a Jedi council—come learn how to find yours.”

You can register for the event here.

“As president of the CEO organization, I was concerned that the energy of the entrepreneurial ecosystem downtown wasn’t reaching the students at UTSA,” Covarrubias said. “Matthew Espinoza suggested I reach out to Startup Grind to open a new chapter on campus.”

Reyes will interview Gomez at the chapter’s inaugural fireside chat. Reyes and Covarrubias met when they were interns during the summer of 2018. Reyes was an intern at the EPICenter while Covarrubias interned at VelocityTX.

“The students are excited about having a chapter on campus,” Covarrubias said. “We’re also working closely with UTSA’s Center for Student Professional Development, they’re co-sponsoring the event along with CEO.”

Startup Grind is the largest independent startup community, actively educating, inspiring, and connecting more than 1,500,000 entrepreneurs in over 500 chapters. Founded in Silicon Valley, Startup Grind has helped millions of entrepreneurs build their businesses, connect with strategic partners, and secure funding. The California-based organization has chapters in about 300 cities worldwide and is investing resources into starting more university chapters.

The university group plans to host an event once a month during the school year. For March, UTSA Startup Grind plans to feature Rick Martinez, founder of the first cannabis accelerator program in Texas.

“I was a senior at UTSA when I helped relaunch the San Antonio chapter and thought this would be an awesome opportunity to bring some great San Antonio entrepreneurs to campus to share their stories with students,” Espinoza said.

Covarrubias and Reyes are both working to shorten the distance between UTSA’s campus and the growing tech district downtown.

“There’s a gap between what happens on campus and what happens in the San Antonio entrepreneurial community and we want to bridge that gap,” Covarrubias said. “We’re looking forward to working closely with the San Antonio main chapter to connect our students to the rest of San Antonio’s ecosystem.”