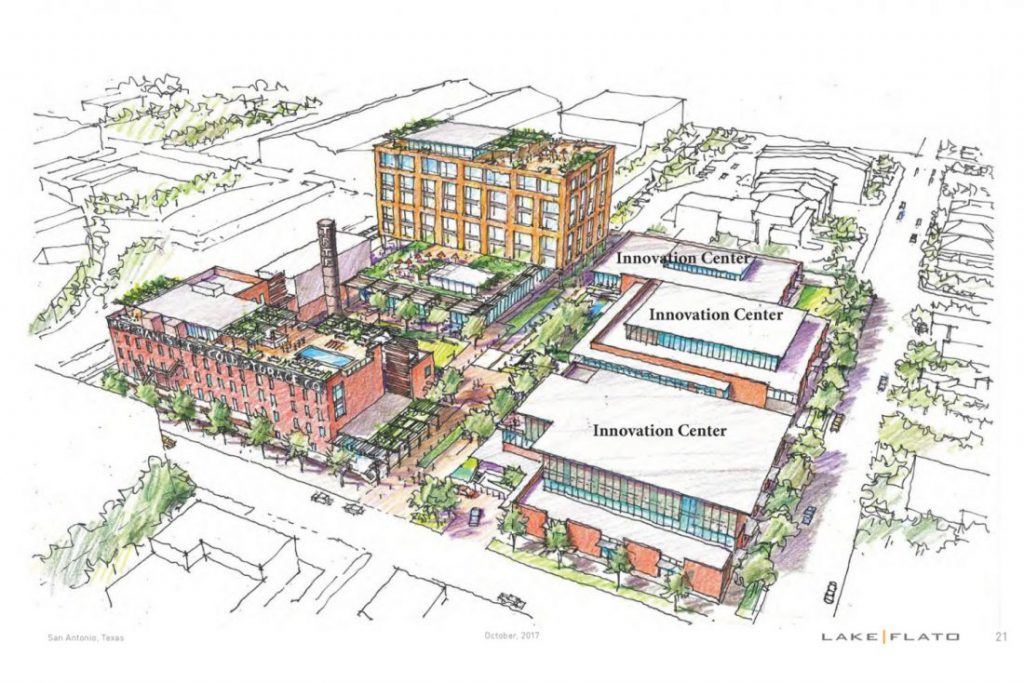 Robert McDermott founded TRTF in 1982 as an economic development nonprofit with an endowment fund for investing in early-stage companies. The $5.7 million incentive package is earmarked for the renovation of the empty complex of Merchants Ice and Cold Storage Company buildings on the 1300 block of East Houston Street, as well as for the construction of TRTF’s new Velocity Center within the complex.

The Velocity Center will house the new VelocityTX biomedical sciences innovation center.  The approved package included a $750,000 Chapter 380 agreement or economic development grant with the rest structured as a TIRZ Development Agreement in the amount of up to $5 million over seven years to offset the cost of public improvements made to the Merchant’s Ice site.

The $750,000 grant will be paid over five years to support the new biomedical innovation center, which includes construction of lab and life science incubator spaces, mentoring and training programs, and space to house emerging life science and technology startups such as the ones graduating from VelocityTX’s Global Accelerator Program.

TRTF estimates the total investment for the four-phase project over the next 10 years as $227 million to redevelop the four-acre Merchants Ice complex site the organization purchased in 2017, according to TRTF’s presentation to City Council Thursday.

“This is a significant milestone for TRTF and VelocityTX in fulfilling our vision for building out a number of buildings devoted to start-up companies, medical research and commercialization, and related projects,” said Randy Harig, President & CEO of VelocityTX. “We will be moving into these first buildings by the third quarter of this year.”

The first phase of VelocityTX, estimated to cost $14.2 million, is projected for completion by the end of 2019. The first phase, which began in early 2019, includes the VelocityTX incubator and community building and an undisclosed anchor tenant from the life sciences sector that will be announced February 19. The second phase is planned to start in 2020 with the construction of a three-story office building with office space and a food hall. Future plans also include construction of a military medical research facility, renovation of the historic Merchants Ice building into a hotel, and a 400-space parking garage. The final phases include building a six-story-tall office building and community space.

Rene Dominguez, director of the Economic Development Department for the City of San Antonio, stressed the importance of building a new biomedical facility in San Antonio’s urban core in bolstering the city’s bioscience and healthcare industries.

“To support the promotion of entrepreneurs in these industries, as I mentioned, is critical to our success,” Dominguez said. “TRTF is about to embark on an exciting, transformational expansion that will impact not only the life science industry but from a physical location standpoint is going to impact the near Eastside. This is going to be a magnet that will attract bioscience companies from around the country.”

The plan is designed to also encourage the development of more biotechnology and digital healthcare startups that could help showcase San Antonio as a city for bioscience innovation. Specific recommendations outline ways to improve access to more funding sources, rewarding innovation with scientific competitions, and supporting the commercialization of research for the marketplace.

Mayor Ron Nirenberg referenced the strategic plan and the work of the many bioscience and healthcare stakeholders in growing San Antonio’s leading industry in his remarks on the TRTF development.

“To see an outgrowth, a manifestation of that work in a facility and a physical ecosystem growing on the Eastside in San Antonio is simply amazing,” Nirenberg said.

Featured image is of the rendering of the TRTF Merchants Ice complex, which will include a bioscience innovation center. Photo courtesy Lake | Flato.