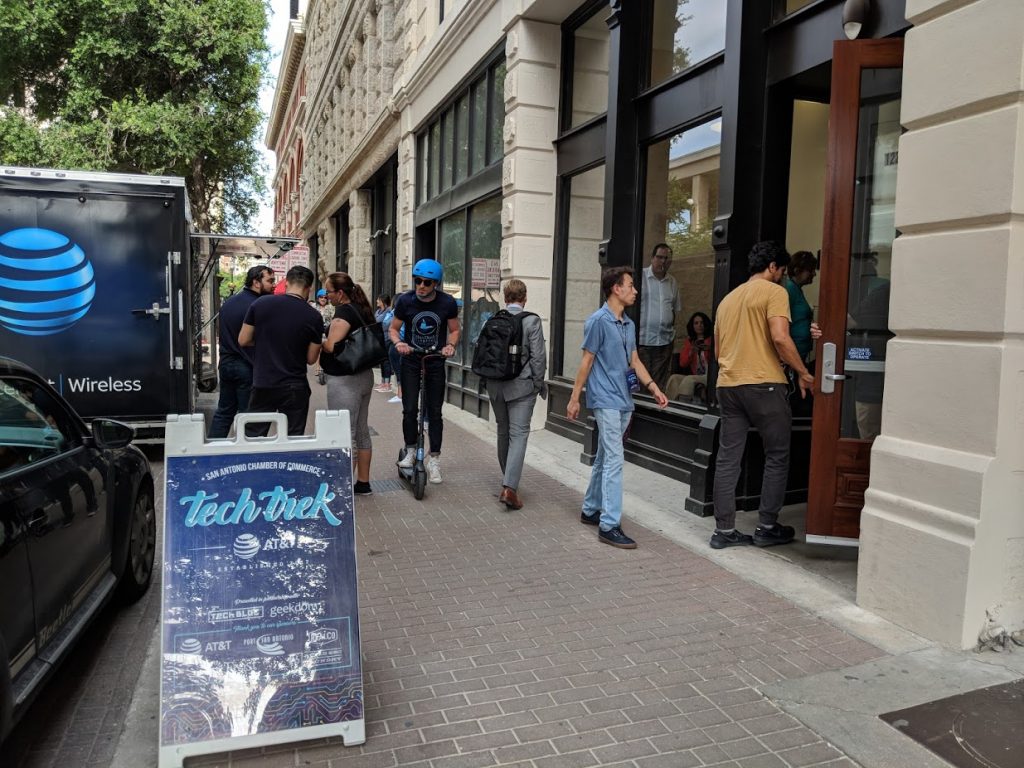 Tech Bloc and Geekdom co-hosted the San Antonio Chamber of Commerce’s second SA Tech Trek, with AT&T serving as the event’s title sponsor. In 2017 SA Tech Trek logged over 1,000 total entrepreneurs, executives, students and tech employees visiting startups in the Rand Building on 110 E. Houston Street and the Vogue Building on 600 Navarro Street. Geekdom estimates 2018 turnout will be almost double, given that registrations this year were twice as much or about 1,000 as compared to last year’s 500 preregistered attendees.

Of note was Port San Antonio’s presence at the event for the first time. Interim CEO and president Jim Perschbach told Startups San Antonio earlier how the Port is focused on connecting technology innovators with customers as it seeks to develop into a hub for tech, cybersecurity, aviation, and advanced manufacturing and robotics innovation.

Geekdom’s CEO David Garcia agreed both density and turnout was higher this year, with San Antonio’s Tech Trek “exceeding our expectations once again.”

SA Tech Trek was created to help connect participants to established companies and startups in the downtown tech district and highlight the growing number and diversity of businesses joining San Antonio’s burgeoning tech ecosystem. Many new startups joined the Fiesta event this year, as well as established corporate companies. Startup resources and training programs such as RealCo Accelerator and CodeUp also were highlighted, attracting curious attendees.

For many, it was a chance to see what the downtown tech scene offers. Chris Thompson moved to San Antonio three years ago from Seattle for a job as a systems engineer at Rackspace. He sees San Antonio as “ripe for change.”

“Over the past three years San Antonio has changed,” Thompson said. “I didn’t know San Antonio as a startup city, but there’s more happening here now.”

The momentum is building with more startup companies maturing and gaining notice from investors, especially as more programs and resources launch to help founders.

“We’re so busy building a tech hub downtown that we sometimes forget that the general public has interest in, but few opportunities to see and experience the fabric of San Antonio’s downtown tech district,” TechBloc CEO David Heard said. “It’s a great concept to build a walkable urban tech neighborhood and what better way to experience it than on a Tech Trek during Fiesta.”

The coordinated efforts of the “San Antonio Chamber of Commerce with TechBloc and Geekdom, and the entire tech ecosystem [helped] make this happen,” Garcia said.

“When we think about where we want to be in 20 years, this is how we get there – bridging the old with the new, uniting the native San Antonians with the newcomers, and sharing experiences in a fun, genuine, and memorable way,” said Richard Perez, President and CEO of the San Antonio Chamber of Commerce.