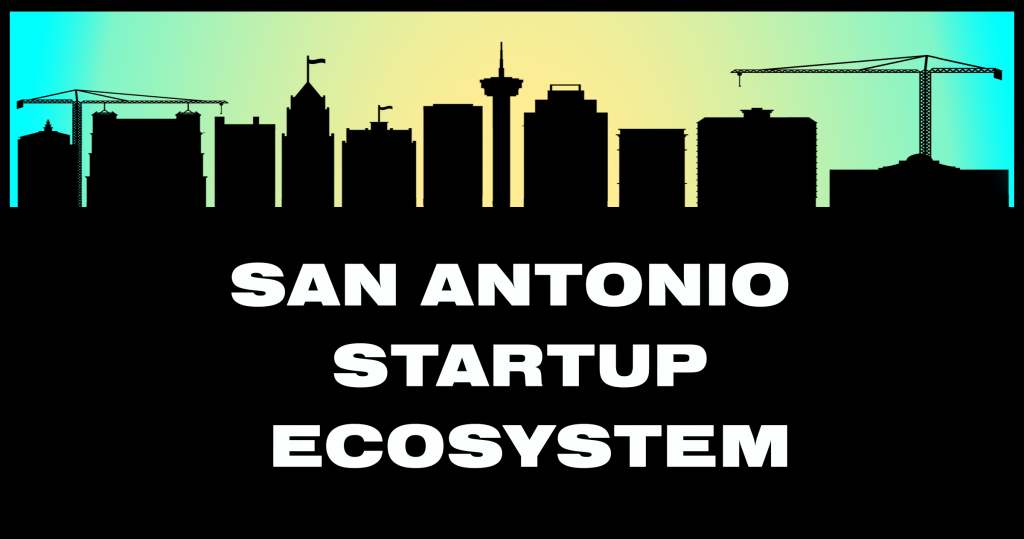 Many people are betting on San Antonio’s future as a city known for its innovation.

Venture capitalists (VCs) are also looking in San Antonio for promising startups. Investors often diversify their portfolios as a cushion against market volatility. That makes San Antonio a good place to invest—we stand out as a city with unique, diverse capabilities.

A big part of a VC’s due diligence is asking founders hard questions. Is an early-stage company working on a significant problem with a sizable market that can be scaled into a solid solution?

Getting to the point where a founder can satisfactorily answer that question takes considerable expertise, mentorship, and effort. Advisers and VCs are an essential part of the startup equation, but they come into play after a founder has decided to launch a company, after quitting the full-time job with benefits, and after others join to build the company until it is ready to launch.

But what does San Antonio’s startup ecosystem need to encourage the creation of more innovative companies?

Non-dilutive or equity-free funding for early-stage startups is the top need most founders and community builders tell me is missing in San Antonio’s ecosystem.

Yet, founders need more than funding with no strings attached. The answers to what San Antonio’s ecosystem needs are much more nuanced.

We asked members of San Antonio’s tech, cyber, and bioscience communities of innovation what they would do with $1 million to address the needs in our startup ecosystem.

Here’s what San Antonio could do to help founders build more promising startups ready to engage a VC’s interest.

“We need to help founders take the leap into entrepreneurship”

Tech startup founders will tell you there are three things they need to build an early-stage company: Early-stage funding, talent, and mentors.

“I think more people would take the leap into entrepreneurship if they had a runway to breakeven as they build,” Braustin Mobile Homes co-founder and CEO Alberto Piña said. “Too many talented people stay at jobs they hate because they need necessities like health care.”

Piña would use the $1 million to help 40 potential founders cover basic expenses with a $25,000 non-dilutive stipend for one year while building their idea into a company.

“We’d put together a panel of local founders to choose the startups and provide mentorship throughout their first year,” Piña said.

“I would use the money to fund any team that wants to continue with their idea after coming out of a Startup Weekend, local university-sponsored event, or other pitch competition,” Woodin said. “With that money, we could incubate them till they are a full-fledged company that is ready to pitch investors or is viable enough to grow on its own.

“That $1 million could be the fuel to create 50 or more companies, if not more.”

An endowment could inject startups with infusions of equity-free money if they achieve certain milestones. Even if the founders don’t make it to maturity, the experience gained would help build the local community of experienced serial entrepreneurs, Woodin said.

Recognizing this need for early-stage funding is what drove Geekdom to create a dedicated fund for a small segment of tech founders. The San Antonio City Council is expected to vote by the end of October on awarding a $250,000 grant for a proposed Geekdom Incubator, a program designed to launch civic-focused tech startups.

“The funding would enable us to support three civic-tech focused teams through a 12-month incubation program each year for two years,” Woodin said. “Ideally, this program will open up to all types of tech companies once we determine funding sources to fuel other tech ideas.”

Early-stage funding is only one part of the equation. Where can founders find robotics engineers, software developers, information security experts, and more to build these companies?

Many career development programs like CodeUp and Project QUEST also connect recently trained job seekers with founders needing the talent to grow as a company.

Sometimes, it’s a matter of believing in San Antonio’s capacity to rise to the challenges.

“Pat [Matthews, founder of Active Capital] sold me on his vision for San Antonio,” Sendspark co-founder Brandon Escalante said. “These past four years the startup scene has really been growing. I see the vision now and have found we can hire the talent we need here.”

As for mentors, Piña found many after launching his tech-centered home building business.

“If you’re willing to do the hard work, San Antonio has many mentors who are willing to share their expertise and help founders,” Piña said.

“It costs less than a football stadium and provides more career opportunities in cybersecurity than football,” Piatt said. “Cast Tech is the only local high school I know that holds pep rallies for its teams competing in Cyber Patriot.”

Amanda Keammerer, vice president of cybersecurity at the San Antonio Chamber of Commerce, sees the urgent need to support entrepreneurs interested in cyber and tech, especially those from underrepresented demographics.

She would launch a new program in San Antonio like Black and Brown Founders or Project NorthStar to support African-American and Latino entrepreneurs interested in building tech businesses.

Local cybersecurity-focused startups also need more opportunities to test their security products in a realistic information technology (IT) environment. They do this to gather insights from the trial period for product refinement and validation, said Will Garrett, vice president for cybersecurity business development at Port San Antonio.

In the absence of more corporate partners willing to offer founders temporary access to their IT environments, a million dollars could be the down payment toward a cyber range where founders can test products before launch. An uncommon commodity outside of government facilities, a cyber range simulates a working IT environment for safe laboratory testing of cyber skills, apps, and tools.

“What’s missing in the cyber startup community is direct access to the customer environment,” agreed Red Thomas, founder of Red Knight, an IT services provider for the government. “What is missing in this city is the opportunity for small businesses and startups to have a testing environment before they take a product to a bigger customer or market.”

Cyber Warrior Network founder Nigel LeBlanc estimates it costs “on the low end about $2 million to $3 million to build a cyber range, with costs rising as the complexity increases.”

A more modest $50,000 could help increase the visibility of local startups like the ones participating in Build Sec Foundry, the only incubator program in the state of Texas focused on cyber startups.

“The $50,000 could go to connecting those startups to potential clients, helping them pitch products and services to target customers,” said Garrett, who also oversees the incubator.

Scientists new to San Antonio who are not affiliated with a major research institution often cannot find specialized lab spaces for their research and development (R&D).

Bob Gracy said the challenge of finding available wet lab spaces for scientists is not unique to San Antonio. The former president of Texas Biomedical Institute (Texas Biomed) and former vice president of research at The University of Texas at San Antonio (UTSA) has worked in the science industry for over 40 years. He continues to advise on how to support the growth of bioscience startups in the U.S., Europe, and Asia.

Building a rentable wet lab, Gracy explains, is not like constructing a generic co-working space. Every scientist or engineer who needs a wet lab has different requirements, depending on the type of project.

“The lab space is built for the type of science being done,” Gracy said. “Because you can’t build a rentable lab space that fits everyone’s needs, we need to focus on targeting specific expertise via institutional affiliations.”

For scientists looking to launch a biotech or bioscience company, they would need to affiliate themselves with the Southwest Research Institute or Texas BioMed, or with a university research program at UT Health San Antonio or UTSA, Gracy said.

For example, a scientist working on dementia would be attracted to UT Health, a longtime leader in aging research with its Barshop Institute and the Glenn Biggs Institute for Alzheimer’s and Neurodegenerative Diseases. Thus, Gracy advises that a scientist’s first step would be to align with a research institution for the best access to expertise and facilities.

This line of thinking explains why Gracy would spend the $1 million on at least one Tier One university recognized for its science and technology.

A $1 million fund could also create awards of $100,000 to $200,000 in non-dilutive funding for scientists with a promising concept to help them generate data for submitting a successful federal grant, Gracy said.

“You can’t conceive of scientific innovation on a napkin anymore,” Mathew said. “You have to compete with resource-rich companies that can generate data for proof of concept R&D.

“As a community, we need to step up and offer this.”

Scientists often lack funding to support early-stage data collection that would help them submit a successful federal R&D grant. It can take a year or more to “hustle and find the $50,000 while you sit on a great idea and lose momentum. For something really new and different, finding that $50,000 is very difficult,” Mathew said.

Olifant Medical founder and recent MassChallenge winner Steven Venticinque has been living this grind since launching his medical device startup in 2018.

Searching and applying for R&D grants and other potential funding opportunities like MassChallenge is “labor-intensive and requires significant insight,” said Venticinque. “I would create an office that introduces companies to all of these opportunities. Entry would be fairly competitive.”

The UT Health anesthesiologist and entrepreneur would call it “something like Search4U,” to be funded with fractional equity.

“It would be like ‘pre-pre seed’ support to invest time and resources into promising entrepreneurs by connecting them with opportunities that can help,” Venticinque said. The process should be competitive because “this sort of matchmaking is labor and time-intensive.”

“One $100,000 prize going to a local researcher is going to do more than handing out smaller piecemeal awards,” Good said. “The infrastructure needed to oversee a grant program should oversee a higher impact researcher. Our city has plenty of high caliber scientists who would qualify.”

Good is thinking even bigger, perhaps a $250,000 award that would result in greater visibility for the San Antonio researcher as a result.

“In the end, don’t we want to be known for bold moves supporting science innovation in San Antonio?” Good said.