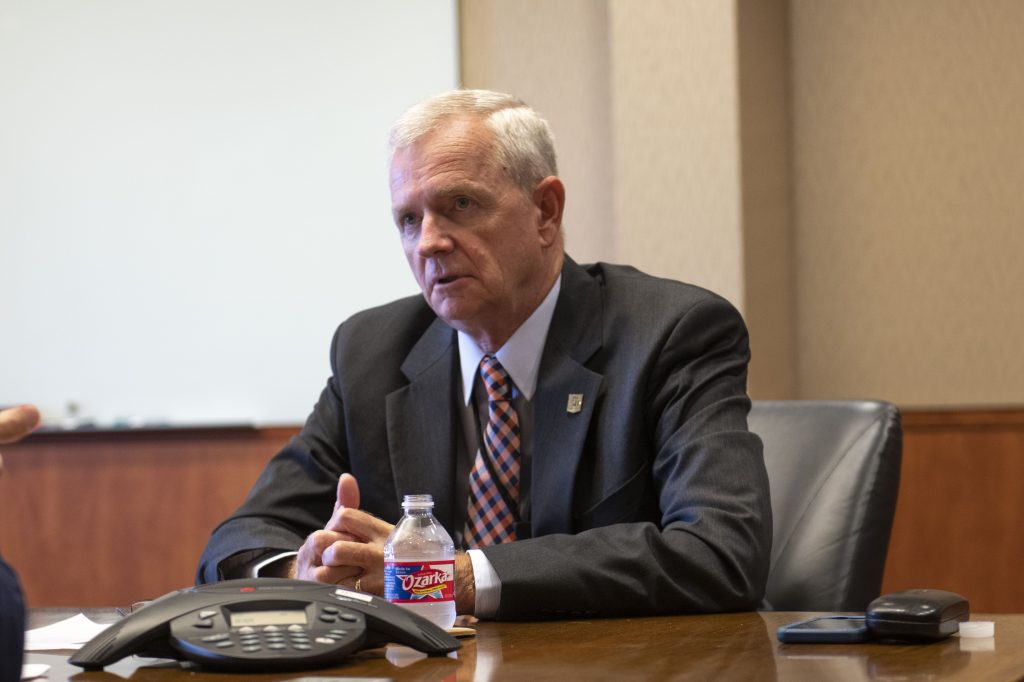 U.S. Air Force Brigadier General (Retired) Guy M. Walsh has been hearing from many stakeholders since The University of Texas at San Antonio (UTSA) named him as the founding executive director of its National Security Collaboration Center (NSCC) July 10.

Walsh is experienced in building strategic alliances between federal and state government, academia, and industry partners. He is one of the nation’s foremost leaders in national security. Walsh served as the strategic initiatives lead for U.S. Cyber Command, the Department of Defense’s newest Combatant Command, co-located with the National Security Agency (NSA) at Fort George Meade, Md. His expertise includes cybersecurity operations, international affairs and partnerships, risk mitigation and crisis response, strategic planning and execution, and local and state emergency management.

The NSCC is a central part of UTSA’s Downtown Campus expansion and the anchor for San Antonio’s emerging high-tech urban core. Dedicated to advancing research, education, and workforce development in cybersecurity, data analytics, and cloud computing, the Center will rely upon partnerships with many organizations contributing expertise to address U.S. national security challenges.

Startups San Antonio spoke with Brig. Gen. Walsh to learn more about why the NSCC should be in San Antonio, priorities for the Center’s development, and what kinds of partnerships the Center still needs.

UTSA’s hub for national security in San Antonio will address a critical gap.

Texas has the most cybersecurity growth potential in the U.S., according to Business Facilities’ 15th Annual Rankings Report. This is primarily due to San Antonio’s cybersecurity industry, the largest concentration of cybersecurity experts and industry leaders outside of the Washington, D.C. region.

The alignment of education, industry, and government agencies within cybersecurity and the ability to collaborate across these sectors presents the city’s most significant opportunity for industry development. The NSCC will leverage this opportunity, Walsh emphasized.

“Most innovation is coming out of industry, especially in cyber,” Walsh said. “What’s been missing is academia’s involvement.”

The NSCC will act much like a university-affiliated research center or UARC. Developed to ensure that the U.S. government has access to essential engineering and technology core competencies, nonprofit UARCs operate in the public’s interest by maintaining essential research and development capabilities.

“Developing the Center on campus and bringing it San Antonio’s urban center, an ecosystem that is outside the Washington, D.C. area, is a relatively new and unique approach to doing this,” Walsh said. “The goal is for our government and industry partners to come here and do one-stop shopping for the types of expertise they need.”

The NSCC’s mission includes a focus on workforce development.

Cybersecurity is the hottest growth sector by far, with the demand for skilled technicians growing each year and outpacing the supply. The shortage of cyber workers may easily top 3 million by 2021.

Walsh pointed out how young children often aspire to professions such as firefighter, police officer, or pilot because they see these professionals in their communities.

“This visibility doesn’t exist for the cyber profession,” Walsh said. “Academia needs to become more involved, especially when it comes to workforce development.”

The goal is for the NSCC to become a noted destination in San Antonio, especially for families with young children. The first floor for the new downtown NSCC will include interactive exhibits for students “that will ignite their imaginations and get them thinking about cyber careers,” Walsh said. He anticipates groundbreaking for construction of the downtown campus to be sometime in March 2020.

A tour of the NSCC’s temporary home on UTSA’s campus includes offices and collaboration spaces for teams from other academic institutions, government agencies, and industry. The sixth floor of the new Center downtown will consist of secure areas to support academic and industry collaboration with government on pressing national security issues.

UTSA’s listing of NSCC partners has around 40 federal, industry, and educational entities already committed to co-locating within the NSCC. The mix is about half government, half industry, along with three academic institutional partners.

Walsh said the new national security hub needs more partners from academia because the NSCC should reflect the expertise accessible beyond UTSA.

“We need involvement from more local universities, more Texas academic institutions, and representation from across the entire UT system,” Walsh said. “If we’re going to compete on a national and international level to address important challenges in national security, we have to start here in our hometown and build a more robust academic consortium.”

The NSCC is also looking for local and state government partnerships.

Cybersecurity is not just the federal government’s responsibility. State and local governments also have unique needs to protect critical infrastructures from cyber-attacks. From elections to water and utilities, law enforcement, transportation, and public health, the national security threats to cities, counties, and states can impose widespread impacts on our population.

Walsh has been in discussions with experts in cities as well as with organizations such as the nonprofit Global Cyber Alliance to understand what it takes to build resilience to shifting cyber threats.

“We’re looking at cities such as New York City, London, and Singapore to learn what are the best practices and see where we can contribute,” Walsh said.  “Because the government is more than just the federal level, we need to expand our partnerships to include more state and local government entities.”

Focus for the first 100 days: Listen, learn, and communicate

The new director is working on the systematic expansion of the Center’s partnerships and forming of the Center’s board of advisers. He is meeting with many stakeholders to ensure the NSCC’s mission is understood, he told Startups San Antonio.

“The NSCC is part of the much larger ecosystem,” Walsh said. “What we can do is bring the researchers and academic resources needed to support innovation.”