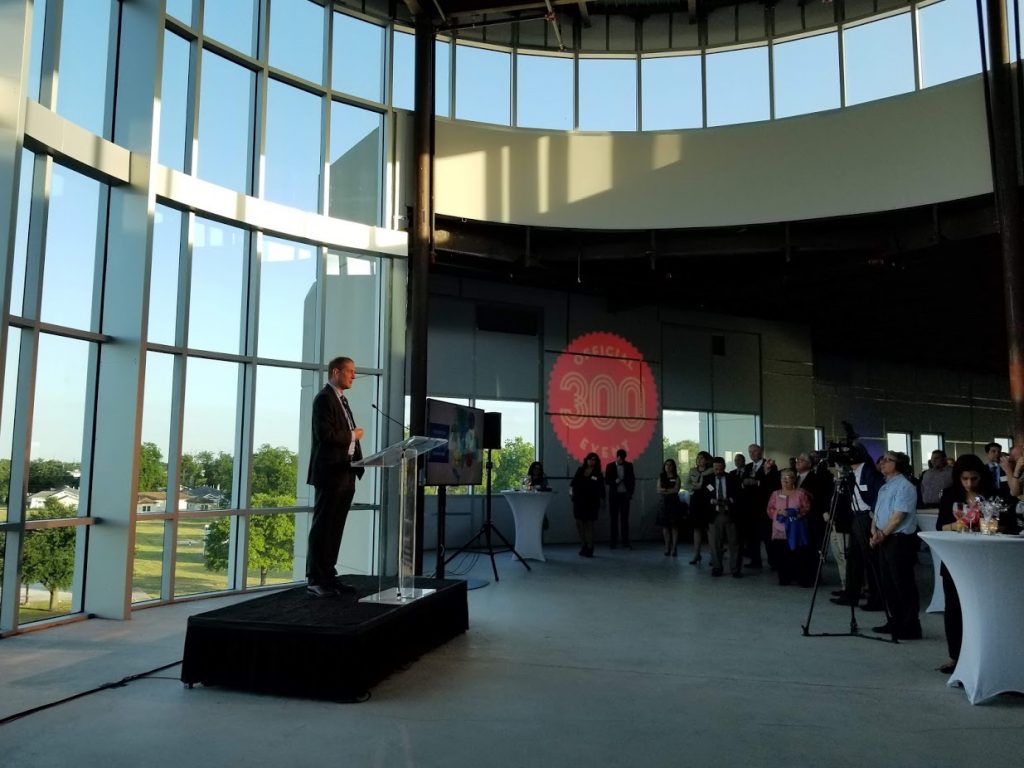 From the third floor of the newly finished building, one has an unimpeded view of Tech Port SA’s expansive terrain.

Increasingly, Port San Antonio is using “Tech Port SA” in its communications to describe itself and the latest developments from Port-based companies. The subtle rebranding in progress reflects its vision to act as a nexus for technological innovation across various industries.

As local stakeholders toured the state-of-the-art facility Tuesday, the official opening of the Port’s first specialized cyber-capable building reinforced its commitment to a tech-heavy future.

The just-completed building broke ground almost a year ago. The 90,000-square-foot state-of-the-art facility can be customized to meet specific needs of the growing number of cyber operations at the Port. Those organizations and companies require secure spaces (Sensitive Compartmented Information Facility or SCIF) with special requirements for security and communications, as well as office space to facilitate public- and private-sector clients and partners to work on-site.

The new cyber building will cost $20 million upon full finish out and is the first phase of a planned 17-acre tech campus at the Port. Long-term plans for the Port’s Project Tech include adding multiple facilities in the surrounding areas. Plans for additional offices and labs to house cybersecurity expansions and classrooms and other spaces to showcase San Antonio emerging technologies would support companies working on innovative security systems for digital assets as well as new information technologies applicable for a variety of advanced industries.

Several cybersecurity and software companies already lease space at Port San Antonio including Booz Allen Hamilton, IOMAXIS, Fidelis Cybersecurity, General Dynamics, Radiance Technologies, Dynamic Advancement, and IPSecure. The Port built the 90,000-square-foot building on speculation based on the demonstrated demand for such specialized cybersecurity space and recent growth in Port-based cyber companies, such as IPSecure’s tripling of its footprint, according to Port officials. There has been a high level of interest from industry, with announcements of the building’s first tenants expected sometime soon.

Port interim president and CEO Jim Perschbach is working alongside the Port’s board and team to continue the innovative redevelopment of the 1,900-acres that once comprised the former Kelly Air Force Base. In taking over for former CEO Roland Mower, who tendered his resignation in March, Perschbach inherited leadership of acreage critical to San Antonio’s economic future as a city of innovation.

That vision, Perschbach said, is to position Port San Antonio as a place to develop and demonstrate technology that can be leveraged across San Antonio’s key sectors, including aerospace, cybersecurity, bioscience, energy, and advanced manufacturing.

“The building has fully redundant power fed by two different power systems as well as redundant communications capabilities,” Perschbach told Startups San Antonio. “What’s most important is to locate this right where the (government) customers are because companies want to be where clients and opportunities are.”

The new Project Tech building is also close to the San Antonio Museum of Science and Technology (SAMSAT) which, in conjunction with SASTEMIC, focus on delivering STEM-based programs to area schools and guiding students toward educational paths and future careers with technology employers at the Port.

As to recasting its image as Tech Port SA, Perschbach emphasizes it’s not an official rebranding, per se.

“We’ve started using ‘Tech Port SA’ in recognition of how we should market ourselves on what we’re actually doing,” Perschbach said. “Think of a Port that connects people to goods—what we’re doing is connecting mature technologies to customers.

The newly opened Tech complex is only the first step in the Port’s long-term plan to position itself as a center for tech innovation. Perschbach presented recent milestones as well as ongoing efforts at the Port for the Texas House of Representatives Cybersecurity Committee at UTSA May 16. The Port’s testimony outlined its path to emerging as the region’s central hub for cyber growth: the recent expansion by Northrop Grumman and IPSecure, the completion of Project Tech’s first phase, and the Port’s participation at the Canadian Advanced Technology Alliance’s Cyber Council in early May.

“You can’t disrupt an industry unless you understand it,” Perschbach said. “We can provide that integration between those creating new technologies with those innovating entire industries.

“It’s a better statement of what we do—a place where tech and industry connect.”