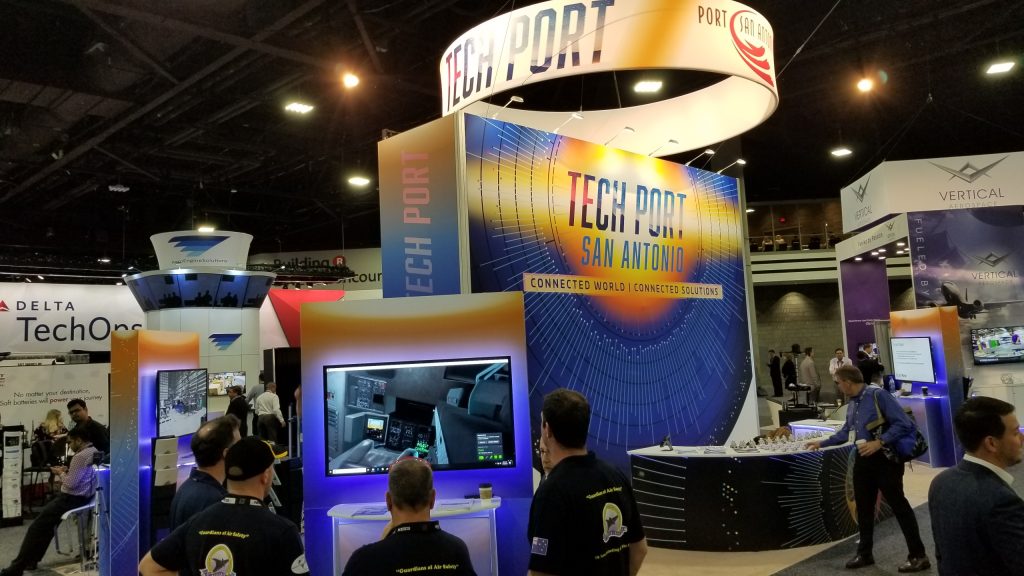 At this week’s Aviation Week MRO Americas in Atlanta, Georgia, decision-makers from the aviation industry gathered to learn about the latest technology solutions to business challenges. Its expansive exhibit hall floor affords attendees the ability to connect with the people behind emerging innovations across the globe.

The expansive 800 square feet exhibit showcasing San Antonio’s technologies captured the attention of many at the MRO conference who were unaware of the city’s talents in advanced aviation, robotics, cybersecurity, and virtual (VR) and augmented reality (AR).

“Our integrated exhibit tells a story of San Antonio’s potential,” said Port San Antonio board chair Chris Aldrete. “By telling our story together with our partners, we can show the world that San Antonio possesses a unique set of advanced capabilities.”

Reckon Point founder and CEO Gabe Garza, who developed robots capable of accurately mapping large buildings using multiple technologies, discovered after speaking with executives from Boeing and Lockheed Martin that the aviation industry did not scan its spaces to maximize its use.

“We talked to a company from Dallas that retrofits hangars, and they’re interested in our capability to scan their spaces and help them create virtual tours for their clients,” Garza said. “No one is doing this kind of work in aviation. We’re the only company here doing indoor scanning and positioning.”

Nils Smith, vice president of the defense and intelligence solutions division at SwRI already has a long list of leads to follow up upon his return. He toured the MRO exhibit hall and spotted only two exhibits as diverse as San Antonio’s — one from Ireland, the other from a city in Florida.

“I think San Antonio is leading the pack here,” Smith said. “We’ve had many exchanges at MRO like the one with a commercial aviation refurbishment firm in Malta that didn’t know robotic capability to strip planes even existed.”

Booz Allen Hamilton’s Mark Rydell used to lead the largest cyber team in San Antonio but now oversees the company’s 1,000 employees working at locations across Texas. The established defense firm demonstrated its advanced VR and AR technologies at the global aviation conference as part of the San Antonio delegation.

The exposure to a different market was eye-opening for the defense firm executive. Booz Allen’s aircraft training scenarios are designed primarily for defense clients but are applicable for the civilian industry, Rydell said. He spoke with many safety and training professionals who viewed Booz’s detailed virtual cockpit environment with keen interest. Aircraft maintenance workers told Rydell how VR and AR have not yet been adopted into aircraft maintenance. The Booz Allen’s aircraft VR training they said could be leveraged to reinforce maintenance training proficiency.

“Those responsible for aircraft maintenance are training a new generation of workers who have never held a tool,” Rydell said. “The younger generation is used to using VR and AR, so it makes sense to adopt this approach for training.”

“One CTO [chief technology officer] from a San Francisco startup was amazed this kind of research was happening in San Antonio,” Islam said. “This experience has been inspiring us to push farther with our research as we had not imagined the different applications for VR and AR in the aircraft industry.”

Other reactions to UTSA’s work at MRO came from pilots and aircraft engineers who showed interest in future collaborations to use UTSA’s solutions.

“Our objective was to showcase how locally-developed innovations in digital security, robotics, and other applied sciences can help transform how aircraft are maintained, upgraded, and modernized around the world,” Perschbach said. “We’re here with some of the best and brightest minds of the aviation industry to help them take it to the next level with the integration of technologies from our startups, mature companies, and universities.”