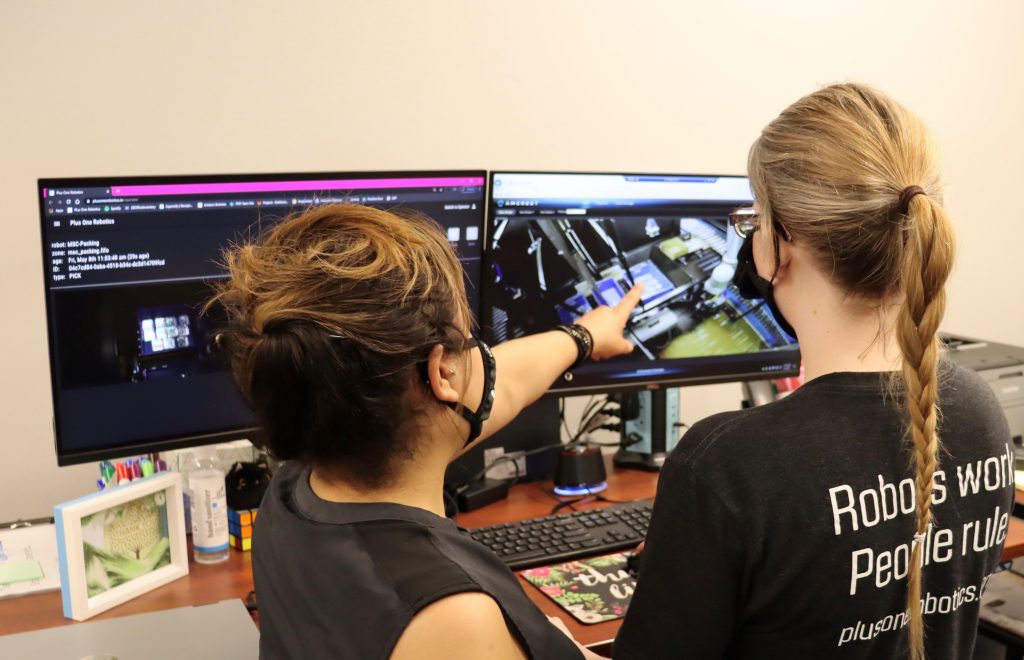 “How would the world change if you could see a thousand miles away and your arm was that long?”

Plus One Robotics CEO and co-founder Erik Nieves wasn’t asking about imaginary superpowers. Delivering these capabilities to logistics clients is the core business of his Port San Antonio-based company.

Plus One’s technology is creating new types of jobs that make work in industrial environments, including e-commerce sorting facilities and manufacturing plans, safer and more efficient. These new career paths call upon the quick reflexes, problem-solving, and even video gaming skills from a new generation of employees. Available for job seekers are these new careers as automation network supervisors, who leverage the visual and artificial intelligence (AI) capabilities robots have to help them ‘learn’ new tasks. Human supervisors increase robots’ efficiency and productivity in the places where they’re deployed.

Plus One Robotics’ work is featured in the latest Building Futures on the Leading Edge of Innovation program presented by Port San Antonio.

The panelists discussed developments in logistics robotics, what those innovations mean for employers and workers, and how San Antonio’s unique business, tech, and education climate helps make the city resilient even in times of crisis.

The ‘Missing Middle’ of Supervised Autonomy

Nieves explained how supervised autonomy is useful in logistics—a market which his firm has been transforming, as reflected by the July announcement that the central FedEx hub in Memphis, Tennessee, is using Plus One’s technology.

“Supervised autonomy means an autonomous system like a robot that works of its own volition—with its own sensing and algorithms—most of the time. When its algorithm breaks down, or its sensors don’t give it sufficient information, it’s then helped by a human.”

What’s new is applying supervised autonomy remotely and at scale to fill in what Nieves calls “the missing middle” between inflexible autonomous systems and flexible systems that require direct human control.

“The Toyota plant here in town may have 200 robots and one or two people looking after them. It’s largely autonomous, but it has zero flexibility. They can’t decide to build Camrys one day instead of Tundras,” Nieves said. “A da Vinci surgical robot at the Medical Center isn’t autonomous. A surgeon controls every motion, but it has complete flexibility on the kinds of surgeries it can do.”

Plus One’s technology allows a human supervisor to watch and assist dozens of robots remotely while they handle a variety of situations.

“That’s the way to bring leverage to industrial-scale automation and bring the one-to-one flexibility you have with robots like the da Vinci,” Nieves said.

“PickOne looks at a pile of parcels and tells the robot which one to go get next. That’s the autonomy,” Nieves said.

When the robot encounters a situation it doesn’t understand, like a strangely shaped parcel, it asks for help. Using Plus One’s Yonder remote software, a crew chief like Jimenez “can see what the robot sees.”

The crew chief remotely helps the robot get past that situation to continue its tasks. Meanwhile, the crew chief supervises dozens of other robots around the world.

Plus One’s tools help logistics companies cope with the labor shortages and the high turnover that comes with grueling warehouse jobs. Now, amid the pandemic, Plus One can help warehouses keep operating even when workers can’t be on-site.

“All of a sudden, what we do at Plus One is not just about productivity or labor savings, it’s about business continuity,” Nieves said. “Our technology lets workers reach into that warehouse and work even if they can’t be physically present.”

The Future of Work is in Demand Now

As e-commerce and more industries rapidly move to supervised automation, Nieves predicts a shift in the nature of those jobs.

“Somebody who used to use their back to move packages can now be a robot wrangler,” he said.

“From a societal and economic standpoint, robotics can help us to grow by taking humans out of jobs that are dirty or dangerous and allowing them to use more of their talents,” Perschbach said. “Having Plus One at Port San Antonio is so exciting because it’s the future of work.”

The change in warehouse and other types of jobs creates robotics and AI career paths that don’t require a technical background, according to Nieves.

“The best crew chiefs are video gamers because the skill set flows right over,” as it did for Jimenez, who enjoys first-person shooter games.

“I didn’t get into robotics until I came to Plus One through a temp agency,” Jimenez said. “Now, if a robot runs into trouble, I get an image of what they’re looking at and information on their situation, and I can choose from there where to go. The data that’s collected when I handle these requests is used to train the robots and to help us improve the software in the next rollout.”

The freedom to pivot from a non-technical to a technical career is right in step with San Antonio’s goal to “create multiple career pathways for everybody,” according to Attwood.

“There are more than a dozen higher education options in the region, and our city invests in skills development beyond higher education, like internships in technical areas for people as young as high school and options for mid-career adults who need to reskill. These steps that the city was taking already are making us very resilient right now.”

In all, Nieves said Plus One is happy with its home in the Alamo City and its location at Port San Antonio, where everyone—robot and human—gets what they need.

You can watch the full webinar here.

Casey Kelly-Barton is an independent Austin-based B2B content marketing writer specializing in data security, IoT, and fraud prevention. Connect with her on LinkedIn.