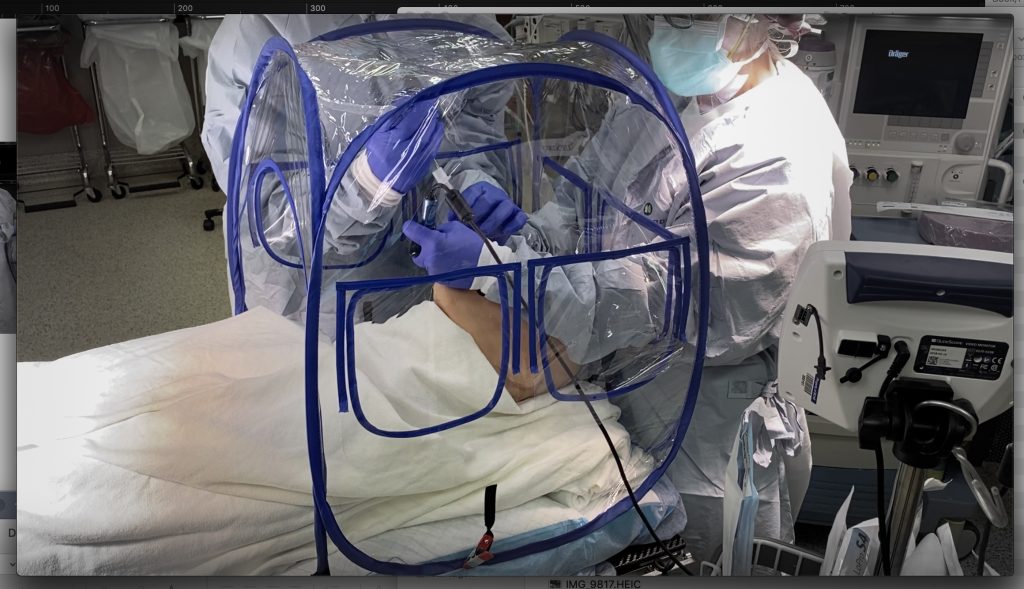 This device is not the first invention that has garnered Air Force funding for Venticinque, a UT Health San Antonio anesthesiologist and former Air Force physician. He co-founded Olifant (one of the San Antonio startups to watch in 2019) in 2018 with engineer Justin Rice and scientist Christopher Carroll to bring an improved airway device to market.

Carroll is Olifant’s chief executive officer, Venticinque is the chief medical officer, and Rice is the company’s chief technology officer.

Olifant was among the first round of AFWERX SBIR contracts announced in February 2019, landing a Phase 1 contract for $50,000 seed funding in March for their next-generation airway device called the Tusk Tracheal Cannulator.

Designed to cover a patient’s head and upper body to contain COVID-19 virus particles during high-risk procedures such as tracheal intubations, Olifant’s STAT Enclosure is being used in several area hospitals, other locations in Texas, and abroad. The U.S. Food and Drug Administration approved the protective barrier enclosure for sale under an emergency access mechanism called an Emergency Use Authorization on May 1.

Rice, who specialized in engineering as both an undergraduate and graduate student at The University of Texas at San Antonio (UTSA) and has worked at several medical device companies, is the principal investigator for the STAT Enclosure’s development.

“We developed this to address the usability issues of the typical plexiglass rigid enclosures,” Rice said. “We added side flaps and ports and used a collapsible design for easier storage, plus made these as single-use devices to eliminate the need to clean them.”

While working on their first SBIR submission, Venticinque and Rice learned about the U.S. government’s accelerated COVID-specific SBIR program.

Olifant’s latest funding is an SBIR Direct to Phase II award for its STAT Enclosure, skipping the typical Phase I requirement to prove there is a customer need for the innovation. Noëlle Tuss, director of government contracts at Long Capture, worked with the Olifant team to submit their proposal under the government’s COVID-specific SBIR solicitation.

“A direct to Phase II award means that Olifant already has a customer that is interested in their product,” said Tuss. “It’s a competitive process. Only 30% of the submissions were accepted.”

The equity-free seed funding will allow Olifant to perfect the design working with the customer to create a user-specific solution for the Air Force, Tuss said. “This is just the first step for them, they’re getting lots of traction for their innovations.”

Olifant will use the $1 million to add a mechanical engineer to the team as they adapt the STAT Enclosure to Air Force-specific health care provider needs, both at home and in deployed settings.

“In response to the crisis, our team showed remarkable creativity and resilience to develop and commercialize the device in just three months,” said Venticinque. “It’s particularly important to protect health care providers in austere environments where human resources can be extremely limited.”

The medical device startup plans to move into its workspace at the VelocityTX innovation hub new campus on East Houston Street sometime in September to expand upon its work.

“In addition to the STAT Enclosure and the Tusk Tracheal Cannulator, we have other technologies in our portfolio that we’re looking forward to advancing from our new space,” said Carroll.

Featured image is of the Olifant Medical STAT Enclosure hood used on a patient, courtesy photo.