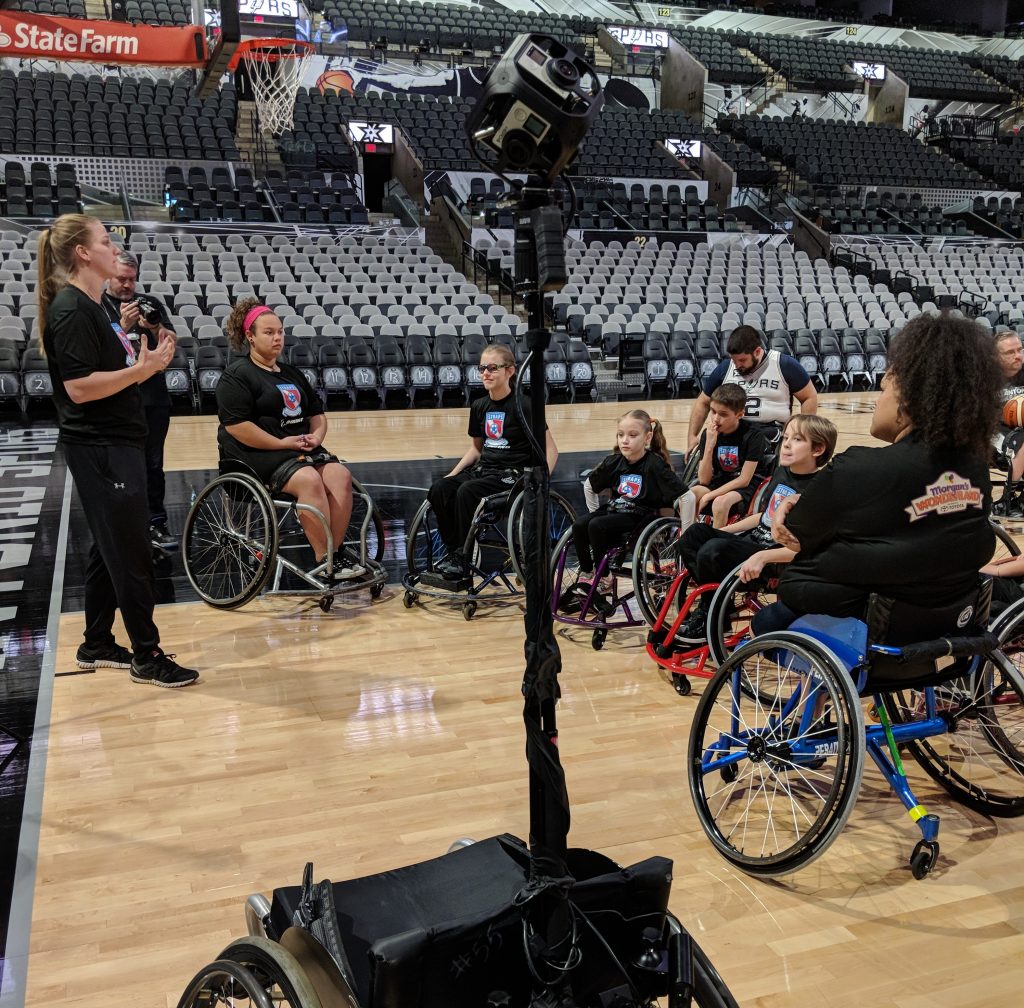 Virtual reality (VR) sports content is being used increasingly for training typical athletes and encouraging people to work out and be more active. For Paralympic athletes, those VR training tools have been lacking—until now.

A San Antonio digital media content development company has created the first-ever VR basketball game that gives players wearing VR goggles the perspective of playing basketball as a wheelchair athlete. The IMG Studio developed this game as a powerful recruiting tool for South Texas Regional Adaptive & Paralympic Sports (STRAPS) and Morgan’s Wonderland to recruit new basketball players, both with and without disabilities, as well as to train users before they play on the court.

“We at STRAPS are so excited that this emerging technology is putting players in the game in a virtual way and increasing awareness of Paralympic sports,” STRAPS director Brooke Matula said. “This project is unique because it’s building something that has never been done before—building  in inclusion.”

Athletes with physical challenges will use The IMG Studio’s VR wheelchair basketball game to teach typical athletes how to play wheelchair basketball, according to Matula.  Founded in 2012, STRAPS South Texas organizes regional and national sports clinics and tournaments and runs 12 programs in adaptive and Paralympic sports for wounded warriors and veterans as well as other adults and youth ages six and older.

“We invite children with typical development into wheelchair basketball practices, so everyone is on the same level playing field,” Matula said. “It’s a unique approach; I don’t know of anyone else doing this.”

The Spurs’ nonprofit partner organization Silver and Black Give Back (SBGB) hosts an annual Team Up Challenge for participants to develop new ways to empower youth through service and sports. STRAPS applied for and received a $30,000 SBGB grant to participate in this year’s Team Up Challenge for its proposed interactive VR wheelchair basketball game. Half the funds went to buying five adaptive sports chairs. The other half funded The IMG Studio’s work to develop the original VR content.

“The Silver and Black Give Back Team Up Challenge allows us to host inclusion clinics to better serve our community,” Matula said. “SBGB has given amazing support for our inclusion clinics project that aims to educate others about STRAPS and the adaptive sports we offer.”

The IMG Studio president James Chandler approached STRAPS with the idea to develop the VR content.

A four-time Emmy Award-winning startup company, The IMG Studio specializes in digital media content including video, animation, web development, virtual reality, augmented reality, and mobile application development.  It is one of the only companies in San Antonio building virtual reality technology using local designers and developers, working over the course of three months to develop this VR content, Chandler said. The player uses touch controllers to shoot the basketball from the perspective of a seated person in a sports wheelchair.

“Not many companies are doing this—developing  VR content for rehabilitation,” Chandler said. “We’re gamifying this to make it fun to play for everyone, regardless of ability to play basketball.”

Watch a short video demo of the game here.

Andrew Jacobson, the studio’s interactive media manager, developed the game after playing wheelchair basketball and studying how the wheelchair moves, using both three-dimensional and gaming engine software to inject realism.  Jacobson also worked with the Watering Seeds Organization, a Houston-based nonprofit organization focused on sports rehabilitation that provides recreational opportunities for individuals with disabilities, to learn more about adaptive sports.

The increasing amount of VR content focused on training and education content provides opportunities to connect with students in meaningful ways and is driving the trend in VR use beyond entertainment. The nonprofit STRAPS may pursue the development of other VR adaptive sports games in the future as part of its mission to educate, recruit, and train athletes, Matula said. The long-term goal is to create a library of free VR content for players to use for training.

“Silver and Black Give Back is grateful to work with STRAPS through the Team Up Challenge,” Loretta Kerner, SBGB senior manager said. “To be able to fund a Virtual Reality project that is going to make a real change in the lives of so many kids through technology is an incredible opportunity.”

Chandler agrees there are many novel uses for VR in experiential learning by simulating real-world environments where students can test their skills, track their work, and interact with experts all within virtual reality. Now that The IMG Studio has developed the first adaptive sports VR game, Chandler sees there is a growing need for more inclusive content that is both educational and entertaining.

“We’re so excited to be a part of this project,” Chandler said.  “It’s an honor to bring awareness to adaptive sports and make it feel real for the players.”