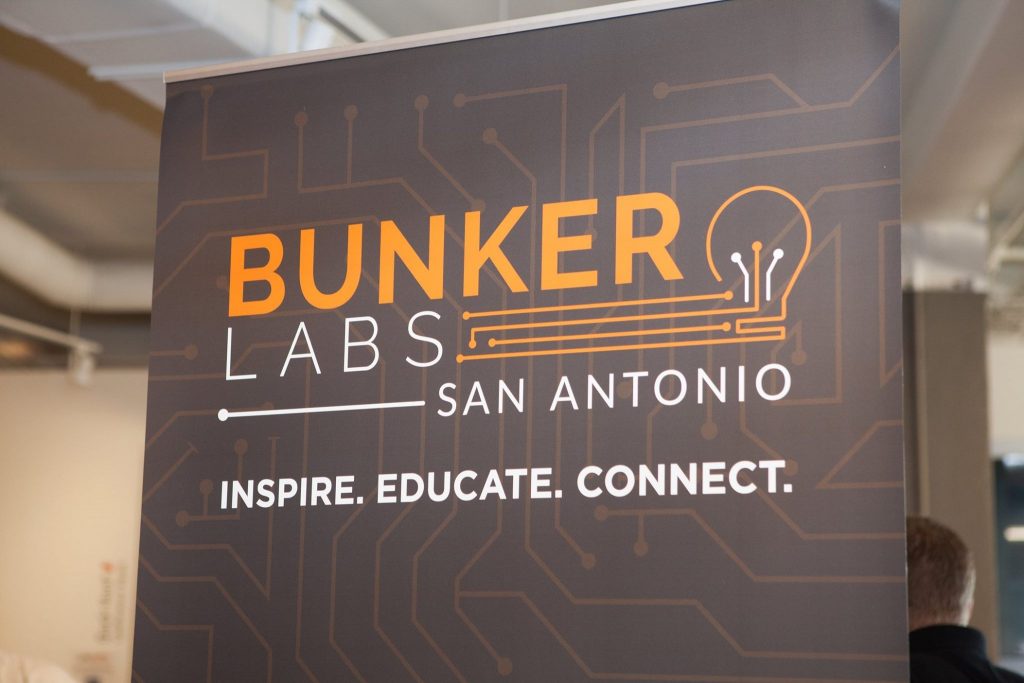 Active duty military members and veterans are well positioned for entrepreneurship, used to the discipline and demanding pace from a career in military service. Many “vetrepreneurs” benefit from joining a program tailored for military members to learn what it takes to launch a startup business. Since launching its San Antonio chapter in December 2017, Bunker Labs San Antonio has been busy providing this service, helping military members from the seventh floor of the downtown Rand Building in the Geekdom co-working space.

Bunker Labs has partnered with the co-working space WeWork on a Veterans in Residence program. After incubating the new program in Denver, Bunker Labs is expanding this program nationally to provide fully sponsored workspace to 11 tribes or groups of 10 veterans across 11 cities every six months. Veterans and military spouses are eligible to apply to the program for six months of fully sponsored, free workspace at their closest WeWork location. Veterans also gain access to Bunker Labs’ digital member network that represents a global community of over 150,000 professionals in more than 170 cities, plus access to thousands of veteran entrepreneurs via veteran partner communities.

The closest WeWork location for San Antonio-based veterans currently is in Austin. Local veterans and military spouses should apply to the program in San Antonio for the Veterans in Residence free workspace at WeWork.

“If there’s not a WeWork near you now, there might be one in the next year,” said Sabrina Marshall-Wojtewicz, executive director for Bunker Labs Southwest. “Your application or indication of interest in applying will help accelerate this as a resource.”

The national nonprofit Bunker Labs has been helping active duty military members and veterans become entrepreneurs since 2014, helping more than 526 companies launch and creating more than 1,581 jobs nationwide in the process, according to its website. The organization, which operates in several cities, is focused on the military community at large, whether members are in transition out of the military or veterans, military spouses, or men and women in the Reserve or National Guard.

Bunker Labs offers Launch Lab, a hybrid program to teach entrepreneurship that will alternate between one week of online curriculum, followed by a week of community engagement in online and local groups. The first Launch Lab cohort has completed the curriculum and traveled to the Bunker Labs national summit in Washington D.C. last week to connect as an organization across its 21 U.S. chapters. The second cohort launched June 11 and will end October 22.

“The Launch Lab curriculum is delivered via an online platform and participants organize into local facilitated groups to meet,” Marshall-Wojtewicz said. “We’re in the process of implementing a new volunteer model, as the original concept was to offer a self-paced curriculum.”

Rather than continue to schedule cohorts with a firm start and end date, Bunker Labs will implement a self-paced 20-week curriculum available on a rolling admissions basis either during or immediately after this cohort ends, according to Marshall-Wojtewicz. Participants who have completed the program will have their information collected in a Look Book that is shared with investors nationally.

The organization’s monthly Bunker Brews meetups feature speakers sharing insights about entrepreneurship. Interested veterans can also download the Bunker Labs App on any iOS or Android device, sign up for the Bunker Labs newsletter to find out about upcoming events, and follow the local Facebook page to watch the weekly live Facebook show “Bunker Breakdown,” and learn more details about the next Bunker Brews on June 28  at Geekdom.

Around 400 men and women in San Antonio leave active duty each month, according to Marshall-Wojtewicz. Bunker Labs receives support from the 80/20 Foundation and leverages Geekdom’s partnership with USAA, in which USAA underwrites 50 percent of membership fees for Geekdom military members. The local chapter is looking for more support to meet the growing need for expanded activities in San Antonio.

Bunker Labs is hosting its first annual “Muster,” or gathering in November to showcase veteran entrepreneurs. The San Antonio chapter is currently looking for partners and sponsors for that event, Marshall-Wojtewicz said. Bunker Labs is also working to launch a local CEO circle of founders who can share experiences, mentor those new to the startup community, and support each other in their journey as an entrepreneur.

“Once we reach critical mass with enough post-revenue startup companies, having a peer support group where participants can network will be tremendously helpful,” Marshall-Wojtewicz said. “Members can present critical questions in each session and ask for help from CEO peers, experienced executives from corporate partners and other successful entrepreneurs who have experienced successful exits.”

Marine Corps veteran, serial entrepreneur, and former CEO Drue Placette agrees creating a community of founders is a much-needed resource that can benefit the larger ecosystem, not just veterans.

“The new partnership between Bunker Labs and WeWork will expose veterans to the well-regarded resources WeWork has,” Placette said. “Bunker Labs’ efforts will also help connect San Antonio to Austin and other entrepreneurial communities because of the national Bunker Lab-WeWork collaboration. It’s a welcome addition to the local ecosystem.”