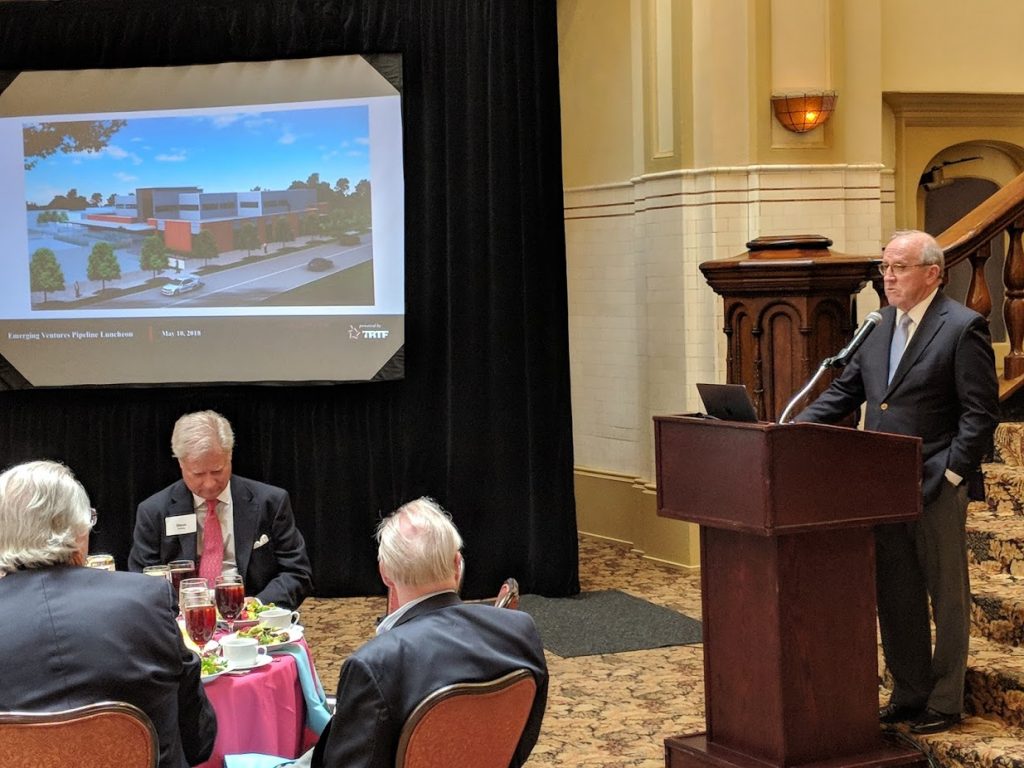 The latest architect renderings of the new home for VelocityTX , an innovation hub to be located in the former Merchants Ice building, was only one of Texas Research and Technology Foundation‘s (TRTF) announcements. TRTF president and CEO Randy Harig updated over 200 attendees gathered at the foundation’s quarterly Emerging Venture Pipeline event Thursday on its latest efforts in fostering San Antonio’s innovation. Updates covered the spectrum of technology, life science, clean energy, and student entrepreneurship developments, as well as the launch of VelocityTX’s programs.

The first building to be completed in the Merchant Ice complex will be VelocityTX’s new headquarters, with groundbreaking expected sometime in the next three weeks, Harig said. The building should be finished sometime in the first quarter of 2019. The pending construction has not stopped VelocityTX from rolling out its programs. Four startups in the first cohort will launch May 21 in Velocity 360, a program for validating startup ideas through pre-incubation. One of the participating startups is the student-developed Vertipro, the second place winner of the UTSA CITE Competition. The college student team developed an augmented reality (AR) app that helps those suffering from vestibular disorders that trigger chronic dizziness.

Harig introduced two other programs to launch this summer which are open to applicants. Velocity, starting July 2, will help life science startups with resources needed for rapid growth through incubation. VelocityTX will take an equity or royalty position in the company, which may also qualify for additional funding from the TRTF/VelocityTX McDermott Fund. The Velocity+3 program is a three-month accelerator course that begins Sept. 10 and includes established pathways for promising life science companies incubated in Brazil and Chile to apply for the program and continue their development in San Antonio.

VelocityTX is using the Wendy Kennedy Institute methodology, a proven approach to systematically teach ideation through validation of a startup’s concept. TRTF has arranged for the Wendy Kennedy Institute to hold its certification training for the first time in San Antonio May 15 and 16 at VelocityTX’s current location at 1422 E Grayson Street. Those participating in the two-day certification workshop include VelocityTX’s staff as well as participants from UT Health San Antonio and University of Texas Rio Grande Valley.  There are two spots available with associated costs for participation. Those interested in attending the training, which provides certification in entrepreneurship building, should contact VelocityTX communications director Jenness Gough at jenness@velocitytx.org.

Another ambitious plan in the works is the development of a shared mentor network of seasoned industry experts who can work with founders in refining concepts. VelocityTX already has an agreement with the EPIcenter, the new energy technology innovation hub, to participate in this new network, in which mentors can apply once and get matched with a startup team in a VelocityTX or EPIcenter program.

“That group of qualified mentors is finite—I am already mentoring in three different programs,” said David Fonseca, VelocityTX vice president of global business development. “We’re creating this ‘one-stop shop’ because we think it will bring great value to San Antonio’s startup community with a ready pool of mentors experienced in different fields.”

With three to four incubator cohorts annually at EPIcenter and at least that many or more at VelocityTX, the network of vetted mentors will help support the growth of these startup programs. Director of development and partnerships at EPIcenter Jill Vassar also stated the application deadline for its next incubator program is May 20.

“The market is crowded with first-generation grafts, and synthetic vascular grafts have a failure rate up to 60 percent in three years,” Standeford said. Founded in 2012 by a student and two faculty members at two University of Texas schools in San Antonio, Cardiovate is looking to raise a Series A round of funding as well as other sources that are non-dilutive or does not require the sale of company’s shares.

MergeVR, founded in 2013 as Merge Labs, Inc., has a range of virtual reality (VR) and AR products focused on young users. Co-founder Andrew Trickett reported the company had sold over 1 million units of its AR-augmented smart toys to date. The startup has also developed the first-ever Nerf gun-like play blaster with full 360 degrees of movement, one of the top gadgets from the 2018 Consumer Electronic Show. The play gun supports mixed reality games from a smartphone and will come to market sometime this summer. For those who have seen the 2018 Ready Player One movie, it’s one step closer to the 360-degree freedom of movement in an AR play world.

As plates were cleared and attendees stayed to connect and network after the event, Harig looked around the room with a slight smile.