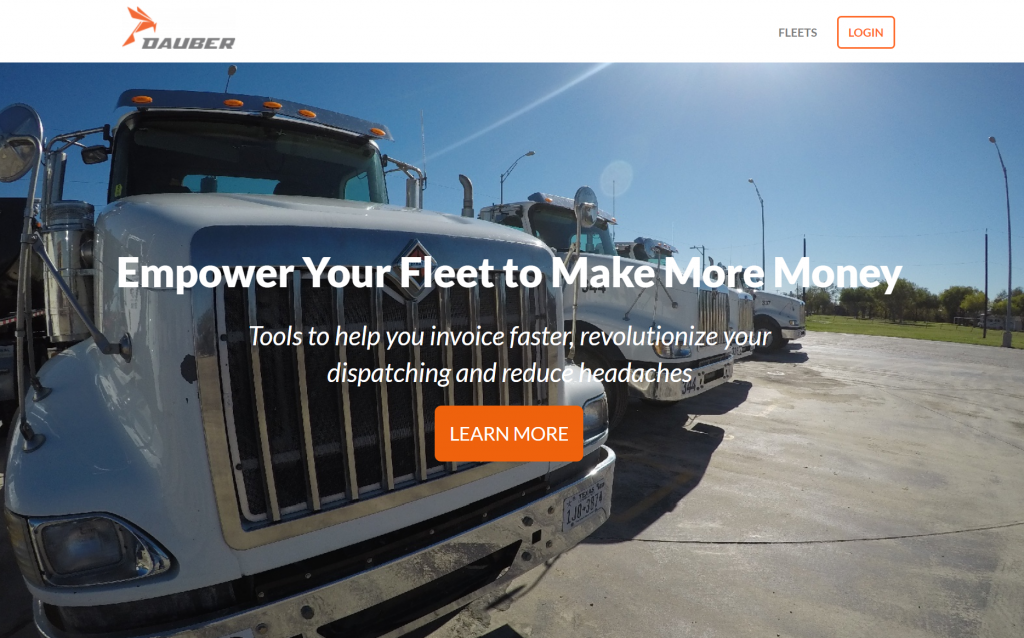 The first startup to join the RealCo accelerator program may not appear to be your typical tech startup at first glance.

By 2017 the Dauber team had launched their web and mobile applications to help dump truck fleets better serve their customers, including aggregate material suppliers, general contractors, and earthwork contractors.

A major challenge for all trucking companies, including ones using 18-wheelers, is the national truck driver shortage.  According to the American Trucking Association, there are 50,000 fewer drivers than needed to meet demand.  This shortfall is projected to increase over the next decade as older drivers retire and fewer drivers enter the workforce.

This driver shortage has especially hit the construction industry, which has a finite number of trucks and drivers, leaving contractors struggling to find fleets to service their projects. Dump truck fleet operators in particular use antiquated operational and dispatch tools and are unable to meet demand, often forced to turn away work. Construction companies typically use a paper ticketing system and phone calls to subcontractors to set up trucking routes. The volume of paper tickets forms the basis for invoicing, which can take weeks to process payments to drivers.

The Dauber app moves that entire process to the cloud, which facilitates faster truck driver payments. It also provides an optimization tool that allows fleets to complete more loads with their existing number of drivers and trucks, in some cases up to 20 percent more loads per day.  This increase in efficiency significantly increases the operator’s revenue. The application displays the GPS locations of vehicles so users can watch the trucks driving their loads in real time.

While Dauber focuses on providing software to existing small and medium-sized trucking companies, Jones has seen other companies enter the market trying to be “Uber for dump trucks.”

“We reject the ‘Uber for dump trucks’ business model,” Jones said. “The dump truck industry is built on trust between humans.  The great operators spend years building relationships with their customers, drivers, and owner-operators.  We respect that. The ‘Uber’ model ends up stealing customers and, most importantly, drivers and owner-operators.”

At least 20 companies across Texas are using the startup’s app with more coming onboard soon from California and other states. Dauber has raised $1.5 million in seed funding to date, with more than half of its investors representing construction and trucking companies. The goal for the startup is to start its Series A round of funding by the end of 2018 and into the first quarter of 2019, Jones said. The investment would be used to help the company scale up sales and development for expansion across the U.S.

“Our time in RealCo has helped us address that span from seed funding to Series A—where all the hard work is,” Jones said. “We’ve learned that you’re not going to get much more investment if you don’t have an idea that has a market and is scalable.”

“Dauber’s founders have deep experience in an often ignored vertical and have done a great job of identifying a real problem, using best practices and data-driven decisions in how they run their business and close deals,” Grote said. “They have their ears to the ground in this niche.”