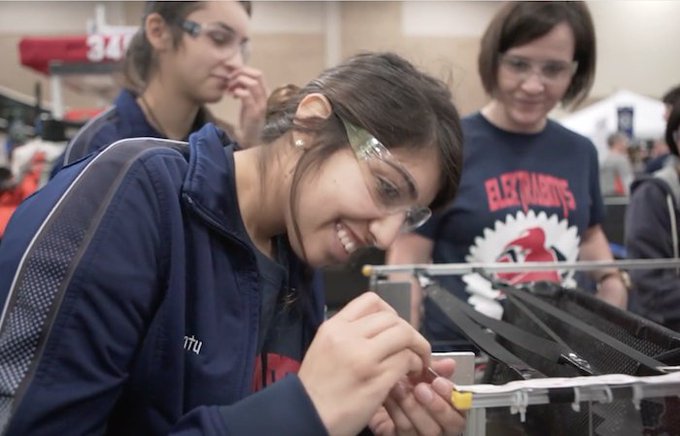 Hundreds of high school students from Texas and New Mexico will converge at San Antonio’s Alamadome April 2 to April 4, 2020 to compete in the state’s Foundation for Inspiration and Recognition of Science and Technology or FIRST Robotics Competition, the largest robotics competition in Texas.

The Texas Workforce Commission (TWC) awarded the FIRST In Texas Foundation, the nonprofit organization that hosts the robotics competitions,  a $1,000,000 grant Tuesday to support student-led FIRST robotics teams across the state. Funding targets Texas schools with the highest percentage of underserved and underrepresented students to help create competitive robotics teams.

“TWC is proud to join FIRST in Texas in providing a setting where extraordinary students can get hands-on experience in STEM disciplines,” said TWC Chairman and Commissioner Representing the Public Bryan Daniel. “Partnerships that create opportunities for our youth are how Texas will remain a leader in STEM and strengthen our economic development by preparing our future leaders to meet the challenges of the 21st Century.”

In the last three years, according to FIRST in Texas, participation has increased by almost 50% and in just one year, the number of Central Texas girls participating increased by 37%.

The $1 million grant will help:

According to Visit San Antonio, the economic impact of this one weekend is calculated to be almost $2.5M, said Patrick Felty, executive director and president of FIRST in Texas.  The nonprofit organization is focused on full participation and turn out for the spring competition.

“This is great news for San Antonio. We are excited to be the host city for the 2020 Robotics State Championship, which will help highlight our focus on STEM education,” stated San Antonio Mayor Ron Nirenberg. “Robotics competitions teach students to be problem-solvers and provide [a] great experience that demonstrates the benefits of STEM fields, which will provide jobs of the future.”

Robotics as a sport brings students, teachers, mentors, sponsors and family members together to participate in this high-tech sporting event. Teams will compete for honor and recognition that reward design excellence, sportsmanship, and teamwork in a STEM-focused environment. In the past, robotics competitions were usually limited to high school teams. However, FIRST soon realized that high school was too late for the wide net they needed to truly grow the field, hence expanding the program to elementary and middle schools.

“In an increasingly competitive job market, individuals with hands-on experience in STEM disciplines are highly sought-after,” said TWC Commissioner Representing Labor Julian Alvarez. “The knowledge and skills gained by these innovators through this exciting program can inspire them to pursue a rewarding career in high demand STEM fields and prepare them to be the future workforce of our state.”

With over 270 robotics jobs listed on Linkedin for the San Antonio metropolitan area, the need to develop more robotics, engineering, and STEM (science, technology, engineering, and math) skills for high-demand jobs is even more urgent.

“We’re changing lives with this program,” said Susan Ashmore, development director for FIRST in Texas. “We’re helping students become career-ready for the jobs of the future that haven’t even been created yet.”

Featured image is of the all-girls team from the Young Women’s Leadership Academy when they competed in FIRST Robotics. Photo credit Dave Wilson.