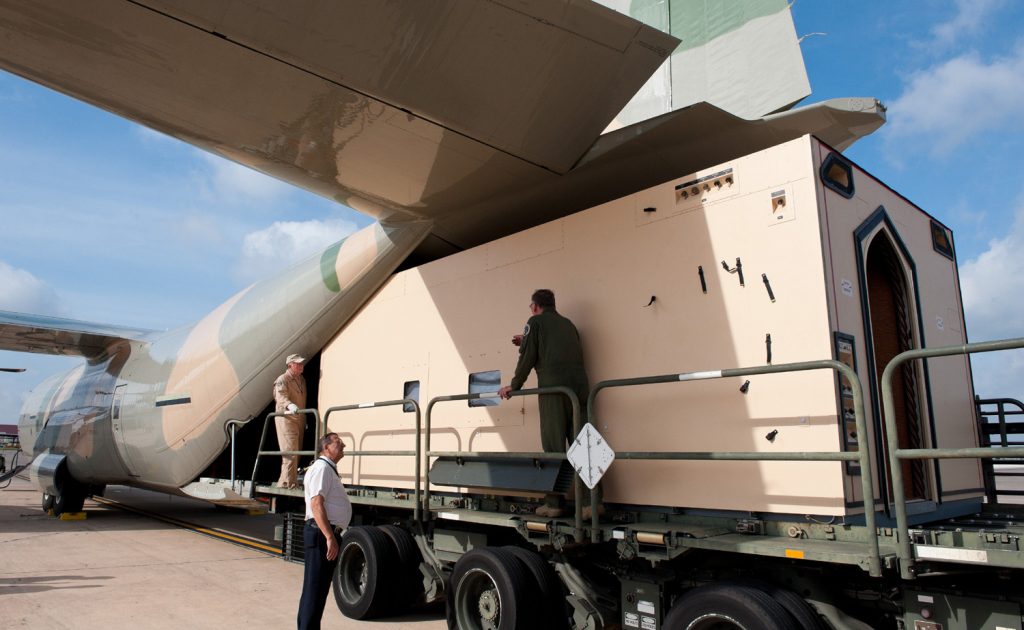 San Antonio-based Knight Aerospace, a company that manufactures customized kits to transform the interior of military cargo planes quickly for other uses, is expanding its operations to Port San Antonio.

Later this year Knight Aerospace will move to 3604 SW 36th Street where the company will have about 80,000 square feet for fabrication, design, research and development, and office spaces in its new facility at the Port.

Launched in 1992, the company is recognized globally for its design and fabrication of specialized self-contained units — modular, palletized systems that can be loaded easily onto an aircraft to transform its functionality in a matter of hours.

The U.S. Air Force uses Knight’s airplane modules on its C-130, C-17, C-27J, C-235, and C-77J/G222 aircraft, among others. The contained units can carry equipment for an airborne military communications center, tailored passenger seating, or be configured into medical modules with fully functional emergency rooms and Intensive Care Units for treating patients during flights. Knight’s customized modules have been credited with saving the lives of soldiers wounded in combat as well as injured victims evacuated from disaster areas.

The various units Knight manufactures allow both military and civilian aircraft to take on different specialized missions. Demand for its products meant the company needed to grow its capacity beyond its current space on Acme Road to build sophisticated aircraft interior units that are increasingly sought by the U.S. military and other customers in more than 25 countries around the world.

“With our upcoming facility at the Port, we will have the necessary room, flexibility and strategic support to build upon this success, meet our clients’ needs and tap into a world of new opportunities,” stated Knight president and chief executive officer (CEO) Bianca Rhodes.

Port San Antonio’s 1,900-acre campus offers the largest aerospace platform in South Texas, including access to the region’s longest runway. Many aerospace and advanced manufacturing leaders such as Boeing, Chromalloy, StandardAero, and the U.S. Air Force have facilities at the Port, which also houses a variety of technology businesses looking to innovate aircraft maintenance and repair.

The company’s new location means easier access to Port San Antonio’s industrial airport at Kelly Field, where completed units can be loaded rapidly onto aircraft for testing and delivery to clients across the world.

“Knight’s ability to continue growing here is a testament to the talent of our people and to our community’s longstanding record of excellence as a center of aviation innovation,” said San Antonio Economic Development Foundation (SAEDF) CEO Jenna Saucedo-Herrera.

The company has about 40 employees and expects to grow to around 100 with its expanded Port spaces. The Foundation was instrumental in supporting Knight’s long-term growth plans, including identifying the new location at the Port. Knight had been looking for a new location and was approached by multiple municipalities both across Texas and the U.S., a SAEDF representative said. The company did not receive economic incentives to remain in San Antonio.

“Their lease was up, and the company was considering its options,” said SAEDF’s director of communications Jamie Bloodsworth. “Our business expansion and retention program team engaged with them and the Port presented a compelling case for the company to relocate onto its campus.”

The Port has worked closely with Knight before as they transported their units by truck to test them on C-17 or C-130 aircraft, said Port CEO and president Jim Perschbach. His conversations with Rhodes revealed the company’s interest in pursuing the latest in innovation.

“Having access to the airfield offers tremendous value but having access to the advanced capabilities at the Port will also be important for the company’s growth,” Perschbach said. “Each pod requires sensors to enable communications between the pod and the airplane, which makes the incorporation of cybersecurity incredibly important. We can facilitate that with access to our technologies and talent.”

The Port’s forthcoming innovation hub factored into Knight’s decision to move closer to where they may tap into advanced capabilities. The Port’s innovation campus will be situated in the heart of its 1,900-acre location and should be ready as soon as 2020 or 2021.

The proposed innovation center will include an integrated center housed in the Port’s existing “flex space” or industrial warehouse on the northeast corner of Billy Mitchell Boulevard and 36th Street. The 130,000-square-foot industrial facility can be expanded to approximately 200,000 square feet to accommodate an industry showroom and science, technology, engineering, and mathematics or STEM education center, collaborative co-working spaces, and a maker space for prototyping.

The industry showroom, prototyping facilities, and innovator co-working spaces will help emerging startup companies demonstrate new technologies that could be commercialized for the marketplace.

“We will be an engaged partner to the Knight team as it pursues ambitious growth plans,” Perschbach said. “Here they will find a flexible platform and the full support of our team to help them make important connections—from connecting to our community’s talent and innovators to connecting with clients across the nation and around the world.”

With industry partners such as Knight Aerospace able to work closely with tech inventors to develop innovative solutions in the planned Port industry showroom, the added value helped tip the balance in favor of Knight’s staying in San Antonio.

“This is another huge win for San Antonio, as we’re retaining and growing an important player in one of our key industry sectors,” said Saucedo-Herrera.

Featured image is of a Knight Aerospace customized module getting loaded onto a plane at Port San Antonio Kelly Field. Courtesy photo.