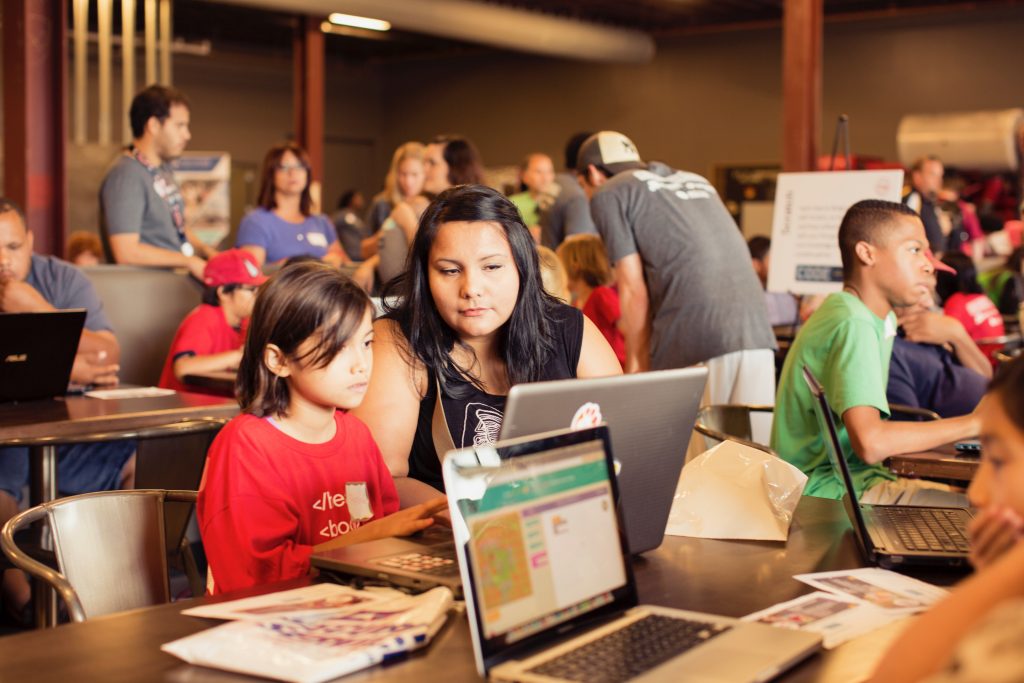 Inspiring young people to learn how to code can be a challenge, but that did not stop Debi Pfitzenmaier and many volunteers over the years from organizing fun, free family events to introduce children to computer coding. That effort became Youth Code Jam, a nonprofit organization Pfitzenmaier founded in 2016 to inspire students to do more than play on computers—they learn new skills like Java, Scratch, and how to program robots.

At free events and paid camps, children aged 7 to 17 learn to “talk” to computers and get them to do what they want them to do. Youth Code Jam’s goals are twofold:  to teach each computational thinking as a problem-solving methodology and to inspire students to pursue computer science and science, technology, engineering, and math (STEM) education. Pfitzenmaier organized the first jam in San Antonio in 2012 and soon recognized the need to develop Youth Code Jam into a program that could be scaled across Texas and nationally.

In February, Pfitzenmaier pitched and won $50,000 in cash awards at the Philanthropitch San Antonio social-impact pitch competition for nonprofit organizations. The money has been helping Youth Code Jam develop a sustainable model to make coding accessible to more young people.

During Youth Code Jam’s first year in 2012, it would cost $120 to $130 per child to organize, according to Pfitzenmaier. Because of the program’s success, its ability to generate donations, and growth in supporting stakeholder relationships, the cost is down to about $17 per student. Pfitzenmaier aims to get that number even lower while extending the program’s reach beyond San Antonio.

Since walking off the Tobin Center stage in February with the Philanthropitch checks, Pfitzenmaier has developed relationships with advocates in Austin, with a jam held in February and another planned for February 2019.  Youth Code Jam has also been training teachers across the state of Texas, with about 70 percent expressing an interest in hosting their event, according to Pfitzenmaier.

“Some of those teachers we trained will put on their own jams – like the one planned in San Benito,” Pfitzenmaier said. “But we are also collaborating with ESC Region 1 to host a community-wide jam in Edinberg in April 2019.”

The pitch event provided Youth Code Jam exposure that continues to yield benefits, according to Pfitzenmaier. Attendees who witnessed her pitch became new advocates inspired to go back to their companies to recruit volunteers for the nonprofit organization. More importantly, the cash infusion gave the nonprofit the ability to develop sustainability and infrastructure, unlike other grants and awards that are so often focused on adding programs.

The Philanthropitch funding helped Youth Code Jam specifically with their revenue model for the community-wide and school-based jams. The organization can provide three levels of support.

“We can provide a ‘jam-in-a-box’ where we run the jam on behalf of a client,” Pfitzenmaier said.  “We can also offer mentorship support for those who just want consulting along the way, but are planning on running the jam themselves, and our website has materials for a DIY jam.”

Next steps include hiring an operations manager to oversee the growing program and volunteers and a curriculum specialist to develop more educational resources for teachers in more districts. To date, Youth Code Jam has trained more than 100 teachers on how to run their jams, and at least a third of them have committed to hosting an event at their school.

STEM jobs are growing much faster than other types of employment. STEM skills can also apply in a wide variety of careers. With more technology in the workplace, future workers will need the critical thinking and technical skills that come with STEM training. As Youth Code Jam continues to scale, the nonprofit is filling a critical need to make coding skills accessible to more students.

“Computational thinking and understanding how to give a computer instructions and make it return what you want to return is a fundamental skill,” Pfitzenmaier said. “We are right at that point where the need for that skill is beyond our capacity to fill it.”

All tickets have been issued for the September 29 San Antonio Youth Code Jam; one can sign up for the waitlist.

Volunteer slots are still open for the seventh annual community-wide jam, sign up for a volunteer position here.

Featured image is from a Youth Code Jam in San Antonio, where students and their families can learn how to code for free. Photo credit: Open Book Studios.