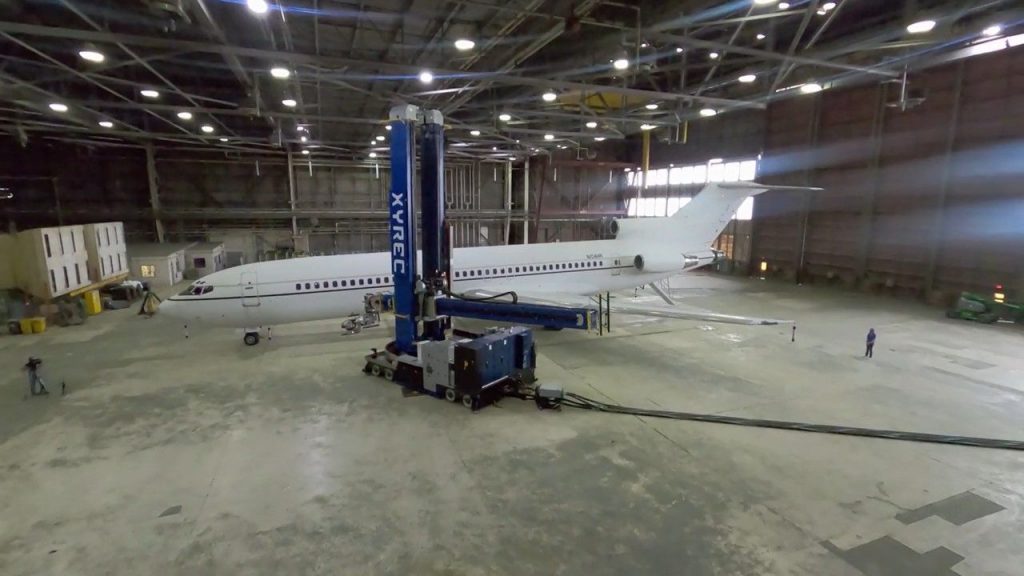 At a custom-built 7,000-square-foot facility on Port San Antonio’s campus, a Netherlands-based company has been assessing its airplane paint-stripping robot. After extensive testing and validation from the Southwest Research Institute (SWRI), XYREC, a global innovator in applied robotic technology solutions, is ready to launch its first robotic plane paint-stripping operation in North American.

XYREC has produced the world’s largest industrial robot, measuring at over 72 feet when fully extended. It comes equipped with a high-powered laser that rapidly strips paint from any size aircraft without damaging the airframe. The automated de-coating of the plane is precise down to the micron level and can stop before removing a specified layer of paint or coating. The robotic system is mounted on multi-directional wheels so it can be repositioned as needed.

R&D World Magazine recently recognized XYREC’s new robotic technology as one of the top innovations of 2020 in the Mechanical / Materials category.

The global fleet of over 125,000 aircraft must be repainted regularly for aerodynamic efficiency, prevent corrosion, and are often repainted with new branding once sold to a new operator. Traditional paint removal involves soaking the airframe with solvents, followed by hands-on scrubbing to remove the last traces.

XYREC’s technology immediately vacuums paint particles into a container (typically, about two pounds of powder) as the laser moves over the surface of the aircraft. Traditional methods for the same aircraft would require approximately 475 gallons of harsh chemicals and 3,700 gallons of water to remove the plane’s paint.

The company has been focused on the challenge of stripping airplanes safely and quickly, Peter Boeijink, XYREC president and CEO, wrote in an email. He resolved to develop a more efficient and cleaner alternative for airplanes’ automated de-coating after visiting Hill Air Force Base in Ogden, Utah, in 2008.

“F-16 fighter-jets were paint stripped by a media blasting robot inside costly specialized hangars,” Boeijink wrote. “This system was even a large improvement compared to the daily operations of stripping aircraft by applying chemicals and manual sanding. The old way is expensive, slow, bad for health by poisoning gas and chrome-VI, and very unfriendly for the environment.”

For aircraft operators, XYREC’s technology significantly reduces costs and turnaround time and eliminates the need for storage, handling, and disposal of harsh chemicals. Using XYREC’s robot can help operators and maintenance shops reduce overhead costs and return passenger, cargo, and military aircraft into service sooner, reducing turnaround time by up to 60 percent, according to the company’s announcement.

“The system delivers flexibility: it works for every aircraft, it can remove any paint very fast, and it can operate in different hangars. The road to get there has been long and winding. To our knowledge, nowhere in the world is such an innovative robot operating or built,” Boeijink wrote.

By 2011, XYREC determined that using new laser technology could achieve faster turnaround times, but only if stronger lasers were developed, with more advanced technology to control the laser beam. SWRI had already been producing robots to maintain fighter aircraft for over 25 years, so the partnership with them made sense, Boeijink explained. German industrial machine and laser fabricator Trumpf and U.S.-based engineering organization EWI worked with XYREC and SWRI to develop the technology.

By 2015 the collaboration produced a design ready for development and testing on the new automated robotic industrial paint removal method used on aircraft and ships and in several heavy industries.

With funding from investors and the Dutch government, XYREC looks to leverage its agreements with several suppliers interested in developing new markets for the robotic technology, as stated in its strategy. XYREC plans to lease its robots and scale up the organization to multiple markets, including military ships and cruise ships in the maritime industry.

“The maritime sector has the same challenges,” Boeijink replied via email.

“Here we have ready access to Southwest Research Institute’s robotics team, who have worked with us for many years to perfect our technology,” Boeijink stated. “This combination of skills, location, and market connections put us in a very strong position to compete globally. The fabrication capability will also allow us to showcase our product in San Antonio while we develop additional technologies that we can sell to a global clientele.”

“We are also extremely pleased that we can be part of the local team supporting XYREC’s plans to build additional units and develop other innovations right here in our community as they expand their global reach.”

The featured image is of the XYREC robot stripping the paint off an airplane at its facility on Port San Antonio, courtesy photo.