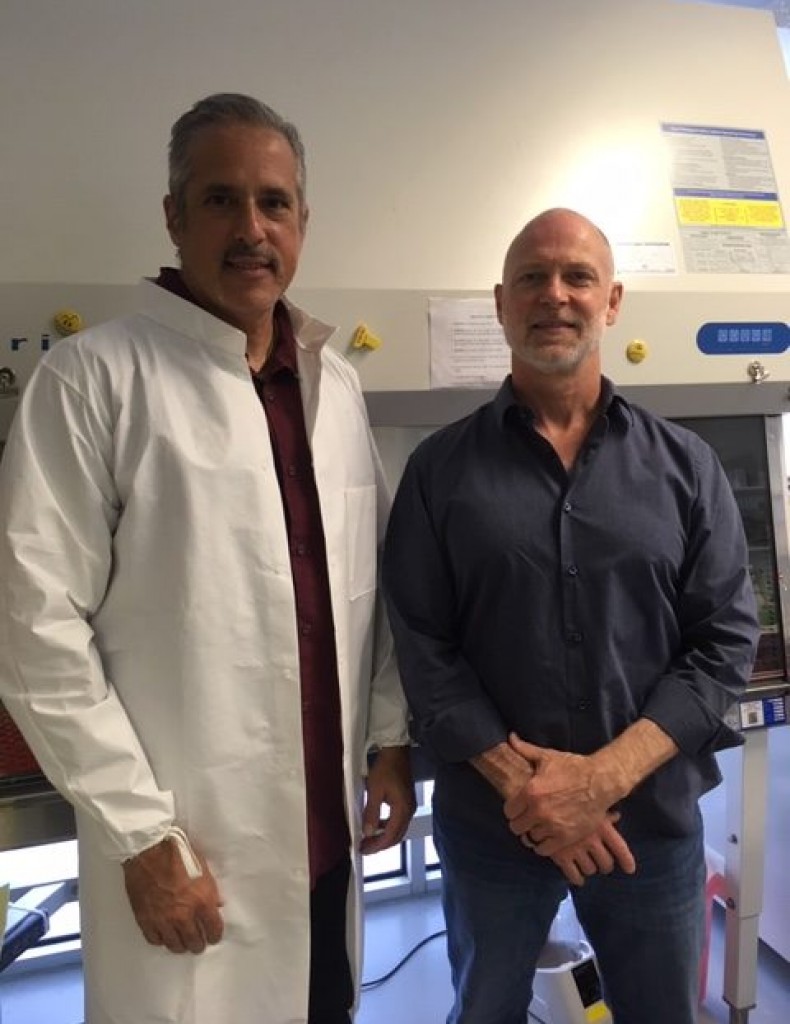 The San Antonio-based biotech startup Vitanova Biomedical is developing a new way to treat cancer called photodynamic therapy that causes no side effects and can kill many types of cancers.

The preclinical stage biotech company is commercializing a novel technique that uses a specific wavelength of light combined with a chemical. The new cancer treatment approach is based on research first done at The University of Texas at San Antonio (UTSA) by Matthew Gdovin when he was an associate professor in UTSA’s biology department.

Gdovin pioneered using the photosensitizing agent o-nitrobenzaldehyde (o-NBA) in combination with a specific wavelength of light that activates the drug. This photodynamic therapy triggers the cancer cell to become too acidic and die, a process known as apoptosis.

“Once our drug is injected into the tumor, we activate it with a deep penetrating medical laser light,” Gdovin said. “We can target to any type of cancer, it spares all nearby healthy tissue, and it doesn’t produce the widespread side effects from other cancer therapies.”

Gdovin’s lab studies showed how using o-NBA without the light is harmless, while using the light without the compound is benign for the patient. This targeted cancer therapy only acts upon cancer cells in areas getting the compound and receiving the light, which reduces the side effects many cancer patients experience from treatments that affect healthy tissue.

After inventing the technology for the acidifying process in cancer cells used in this biologic, Gdovin founded Vitanova in 2014 to develop the proprietary o-NBA drug and bring the combination drug-laser cancer therapy to market.

Because some cancers overproduce specific molecules or markers, they allow Vitanova’s patented nanoparticles in their drug to recognize those molecules so that only the cancer cells will take up the nanoparticle. The medical laser can penetrate through tissue and bone so the light can activate the cancer-killing nanoparticle in tumors that can be hard to reach while leaving the healthy cells unaffected.

Although the combined approach can work on many types of cancer, Vitanova will first commercialize a treatment for prostate cancer. Follow-on plans include using Vitanova’s therapeutic to target breast, colon, lung, and ovarian cancers.

Vitanova clinical adviser and UT Health San Antonio genitourinary oncologist Dr. Michael Liss knew Gdovin in 2015. He has witnessed the evolution of the product since then and is now helping the biotech startup address the translational aspects of Gdovin’s research in developing clinical applications for the new therapeutic.

“Men can live long lives with prostate cancer, so we’re worried about their quality of life and complications from prostate cancer treatment,” Liss said. “This is directed therapy—in essence, precision oncology.”

“The beauty of our technology is that it’s based upon three proven principles accepted in oncology therapy today,” Roberts said. “The first is that acidosis kills cancer cells. The second principle is that we can activate compounds with a specific wavelength of light. The third is you can target compounds to specific cancer cells using ligand-receptor combinations or antigen-antibody combinations, so we attach an antibody to our nanoparticle that is specific to that type of antigen found on say, prostate cancer.”

Vitanova works out of Crown Scientific, a “hard-core wet lab space,” Gdovin said. “Having that available for us is critical. I’m the only one who’s done animal studies using this laser activation method.”

Roberts is an experienced biotech entrepreneur who has already taken about 10 products to market, so “we understand the process,” he said. Because the FDA-approved medical laser comprises two-thirds of their combination therapy, Roberts said the startup should have a clear strategic pathway through the regulatory process.

After closing its friends and family funding round, Vitanova is now raising a $3.5 million seed round. The next step for Vitanova is to conduct more animal studies in Crown Scientific’s industry-accredited animal facility.

“The seed funding will help Vitanova get our treatment through the testing and approval process,” Roberts said. “The company is early but well-positioned given that Vitanova’s drug is developed and ready to go.”