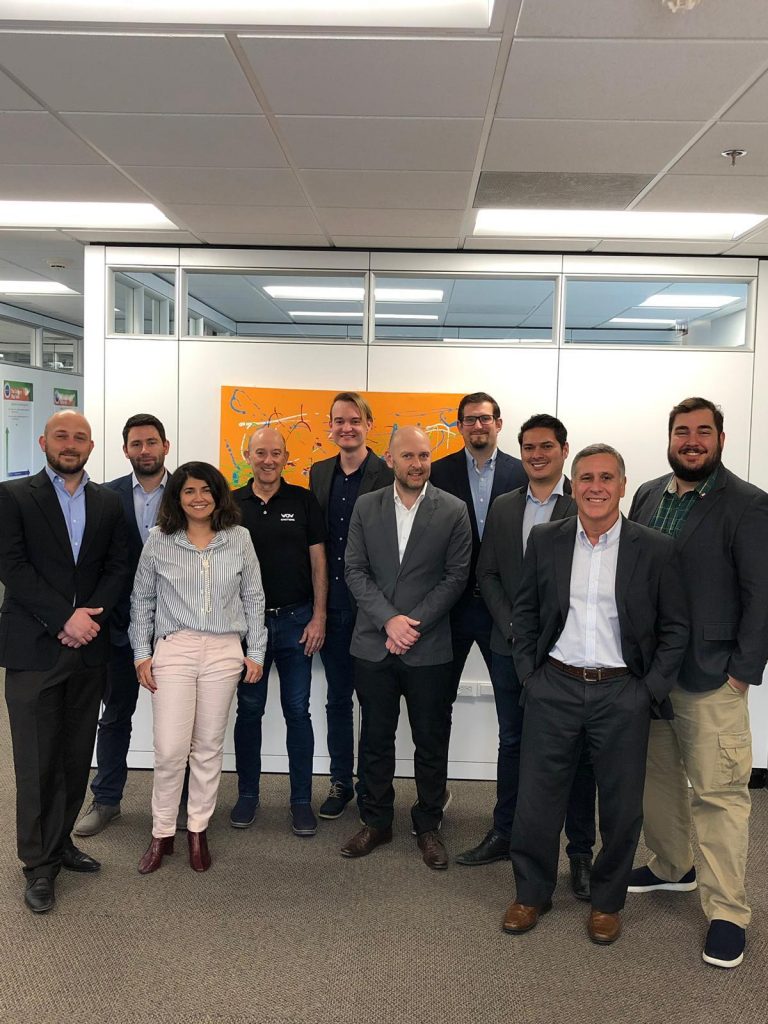 Six Latin American startups have settled in San Antonio after completing a three-month-long VelocityTX accelerator program. The innovation hub on San Antonio’s East Side created its Global Accelerator Program (GAP) to give international companies a pathway to fast track their growth in the U.S. The six teams graduated from the first cohort Wednesday and all plan to grow their companies for the U.S. market.

VelocityTX also announced its fourth international partner Wednesday. Called Creame, or ‘create’ in Spanish, the Medellin-based incubator will extend VelocityTX’s reach into Colombia. Applications for the next GAP cohort open February 1, 2019, and begins August 12 for 16 companies to be selected from four Latin American countries.

VelocityTX also plans to launch its incubator program in February 2019.

“This program is the first of its kind,” VelocityTX vice president of global business development David Fonseca said. “We can achieve economic development and stimulate deal flow by bringing quality companies to San Antonio for acceleration.”

Startups San Antonio interviewed the six teams about their experiences in and benefits from participating in VelocityTX’s accelerator program. The entrepreneurs agreed they found GAP to helpful in translating their innovative businesses into products and services for American consumers.

“San Antonio is an effective ‘soft landing’ for these companies,” Fonseca said. “We have all the elements that Latin Americans need to become established in the U.S. market.”

VybMe
Renan Baima, Moises Bastos, and Ana Carolina Lima established VybMe in 2013 in Brazil to market a directional vibration technology that can guide visually impaired athletes on a running track using internet-connected wearables. The vibrations provide the runner directional cues on where the person should move.

Lima, who specializes in assistive technology, recognized the potential of vibrational signals to help people be more effective in their environment.

“Because our brains are neuroplastic, we can learn to interpret signals that come to us in different ways,” Lima said. “We can learn to navigate by vibrations, and we’re already doing it—every time your cell phone vibrates, you learn quickly what that signal means.”

Baima said they launched their first product in Brazil for visually impaired runners, but their technology has much broader applications. Typical navigation products rely on visual and sound-guided cues, while VybMe’s technology gives users vibration signals, helpful for the military, air traffic controllers, or those navigating traffic. The startup team of engineers is working to develop vibration-assisted navigation for Blue Duck according to San Antonio scooter company founder and CEO Eric Bell.

“One of our initiatives is to make our scooters as safe as possible,” Blue Duck chief technology officer Drue Placette said. “VybMe’s vibrational tech in the scooter’s handlebars will enable drivers to navigate city streets without having to use a cell phone.”

The VybMe startup will stay in San Antonio as it works to scale its patent-pending technology for the U.S. market.

“What we have done here in three months at VelocityTX was the equivalent of three years in Brazil,” Baima said. Click To Tweet

“We made the tool to disrupt the way people update content to their websites,” Schmidt said. “Content marketing uses visually rich design, and we want to make that as easy as possible for creators.”

GAP helped the co-founders network and refine their value proposition, Schmidt said. The company plans to market to U.S. and international digital companies interested in design tools like theirs.

“VelocityTX’s competitive application process meant that everyone in our cohort is business savvy,” Schmidt added. “This accelerator’s unique cross-cultural environment facilitated our learning from each other and about the differences in business culture.”

“We see different metabolic routes involved in this disease, so we’re analyzing a set of biomarkers using deep machine learning to see if there multiple pathways affecting your overall brain health,” Bisquertt said. “I look forward to staying here and collaborating with other researchers in San Antonio.”

The scientist said he found San Antonio’s network of Alzheimer’s researchers supportive of innovation and collaboration. His time in the VelocityTX accelerator gave him the training to iterate quickly to develop his diagnostic test for market faster.

Their patent-pending business-to-business (B2B) software as a service (SaaS) platform allows sports teams to engage a sports arena audience with ultrasonic sound humans cannot hear. The data over audio works without Wi-Fi to deliver branded content to the cellphones of those in the arena. The content delivery provides a new monetization stream for the sports team and sponsors and can be embedded into an existing application, or customized as a stand-alone app.

Matarrita started his video publishing company Quantik in 2013 and has worked with major telecommunication companies in Costa Rica interested in his alternative means to transmit signals. Hayward worked in the gamification industry throughout his career and brought Fantasy Sports to Costa Rica.

“The mix of gamification and ultrasonic sound allows us to transmit data over audio using regular speakers,” Matarrita said. “It’s a unique way to deliver content while providing a new experience for the audience.”

The company successfully demonstrated the technology during a game in the Alamodome which has agreed to be a beta user of the Sports Sonar technology in 2019. Their biggest takeaway from the VelocityTX accelerator experience was adapting to the faster pace of the U.S. market.

“Our entrepreneurial culture back home is much slower,” Hayward said. “San Antonio is perfect for our soft landing—it’s a growing city, not a saturated market like Silicon Valley.”

Costa Rican Gabriel Chernacov founded WOW Emotions in 2017 to sell customized augmented reality enhanced printed material. The industrial engineer has completed over 300 projects in augmented, virtual, and mixed reality content and is focusing his efforts on the trade show industry. He plans to scale his Ready4AR platform into the largest established content provider of AR and VR content.

“Our platforms can be a great asset for exhibitors because it can act as a virtual reality showroom that is both portable and interactive,” Chernacov said. “You give the customer a headset and immerse them in your product, services, and facility.”

Chernacov explained that the innovation pipeline in Costa Rica is robust, yet “there is no depth in the market because of few acquisitions and mergers, no IPO possibilities, and no exits.” Even with his extensive experience raising capital and dealing with Costa Rican investors, pitching to U.S. angel investors and venture capitalists has opened Chernacov’s eyes to the differences.

“In Latin American, there must be an exact match between your pitch and the specific subject that you know for a fact the investor is interested in,” Chernacov said. “Here, I’ve discovered investors are much more open to hearing about a concept of interest to them generally.”

In 2017 Brazilians Bruno Scott and Alex Lucena co-founded DocPad, a SaaS platform that gives patients a centralized means to manage their mobile electronic health records by collecting personal medical data from multiple sources such as labs, healthcare providers, and hospitals.  There are 15,000 users of DocPad in Brazil with a projected customer base of 50,000 for 2019, Lucena said.

“This is something that is a must-have product,” Lucena said. “It will be HIPPA complaint and have strong cybersecurity.”

As the company scales its platform, the large datasets will help DocPad evolve into a database software company. Lucena said adding a blockchain architecture to this platform will anonymize the healthcare data for monetization.

The accelerator experience challenged the serial entrepreneur and investor to iterate on the startup’s approach. “We’re looking for investors ideally in the healthcare space to scale it for the U.S. market,” Lucena added.