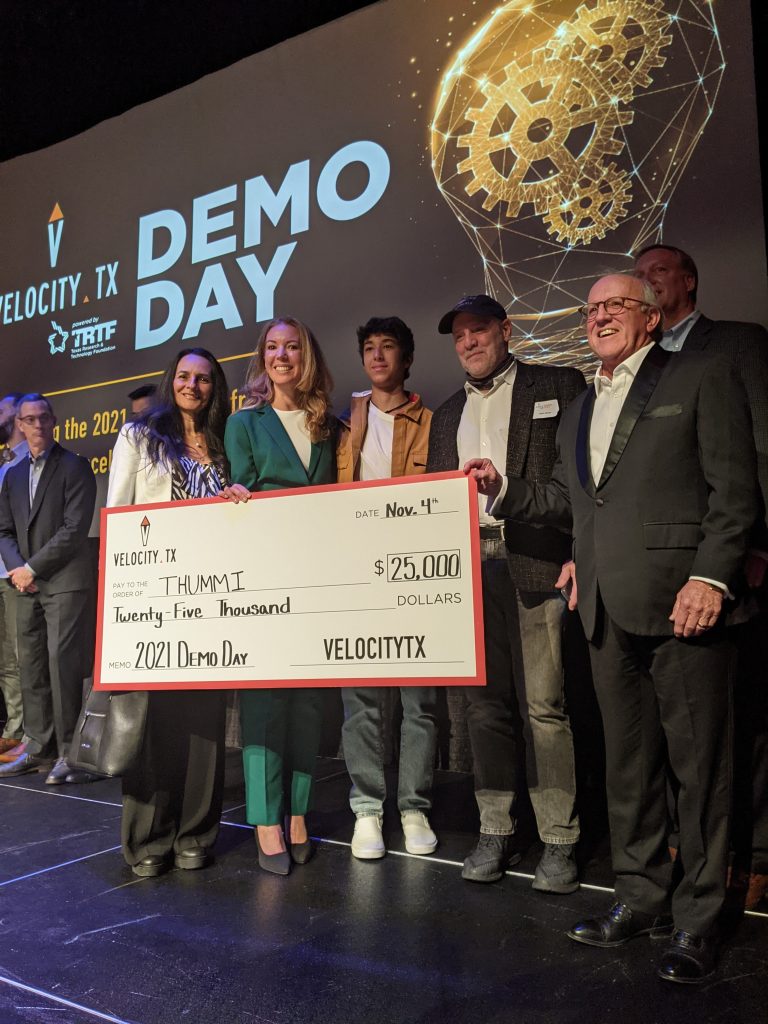 Since summer, six early-stage bioscience companies from Texas, Brazil, and Chile have participated in VelocityTX’s 16-week BioGlobal Accelerator program. VelocityTX is an innovation center that runs an accelerator program designed to help startups in the medical devices, biotech, and healthcare technology spaces.

The founders pitched to five judges and a Tobin Center audience Thursday evening. Mentors, judges, and audience members voted for the six teams using an app. VelocityTX provided the $25,000 in equity-free funding.

Thummi’s founder and CEO Dr. Alessandra Morelle became an oncologist after her tuberculosis diagnosis at the age of 13. She experienced complications from the adverse effects of her treatment and had to be hospitalized for two months because her healthcare providers did not catch the complication early enough.

In 2017, Dr. Morelle developed a digital platform for the remote monitoring of patients that sends reports from them in real-time to health care providers. The application also records and organizes the patient’s day-to-day events, tests, and appointments.  The company has a provisional patent and is on track to generate a projected $2.4 million in revenue in 2022.

“Of all patients deaths, 12% are due to the adverse effects experienced in the course of treatment,” Morelle told the audience.

The money will go toward Thummi setting up an office within VelocityTX’s spaces, Morelle said, where the company will base its U.S. operations.

Alt-Bionics tackles the problem of high-cost prosthetics with its affordable alternatives in the prosthetic market. Ryan Saavedra, who heads the San Antonio-based company, won second place at the Tech Fuel pitch competition held in October. He has raised $305,000 to date in funding for his prosthetics company.

The Chilean company Bioxiplas manufactures and commercializes biodegradable personal disposable equipment and compostable and biodegradable plastic bags. They also have a patented line of protective plastic gowns and other medical personal protective gear embedded with anti-microbial silver nanoparticles that protect against SARS COV2, the virus that causes COVID-19. Since its inception in 2011, the company has generated over $4.6 million in revenue.

Eisana is an oncology solution company providing solutions for patients dealing with the debilitating side effects of cancer treatment that can reduce one’s quality of life and incur significant healthcare costs. The medical devices help cool a cancer patient’s hands, feet, and head from the debilitating effects of chemotherapy. CEO and founder Dr. Carole Spangler Vaughn was previously CEO of Emtora Biosciences in 2019 before she launched her medical device startup in Houston.

Rene Dominguez is president and chief operating officer of the Texas Research and Technology Foundation (TRTF), a leading non-profit economic development organization and parent company of the subsidiary VelocityTX innovation center. He outlined how VelocityTX’s rollout since the pandemic of programs such as the CEO Roundtable and bioscience entrepreneurship courses have added to the innovation center’s ability to foster economic growth beyond its incubator and accelerator programs.

TRTF launched VelocityTX in 2017 to grow entrepreneurial activity across San Antonio’s bioscience ecosystem, TRTF CEO Randy Harig said, “and that was the best decision we could have made.”