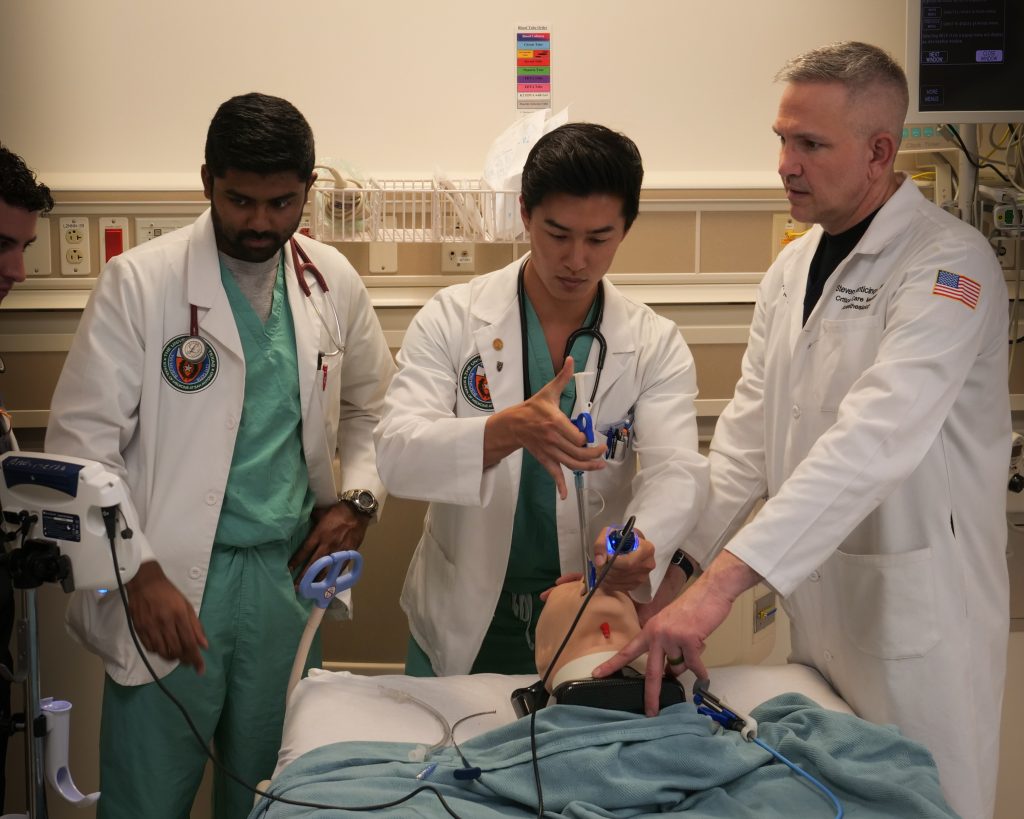 However easy it might look in movies or television shows, intubating or inserting a breathing tube into an unconscious person can be quite difficult, especially under stressful emergency conditions. When a patient is not breathing, every second counts until that person can receive oxygen again.

San Antonio-based anesthesiologist and critical care physician Steven Venticinque, M.D., knows well the challenges in intubating patients both in the operating room and beyond. During his career in the U.S. Air Force, Venticinque led critical care air transport teams flying in Iraq and Afghanistan.

This clinician-tinkerer turned entrepreneur created a new type of airway device in his garage workshop that aims to make intubation easier. Click To Tweet

Venticinque has been at UT Health San Antonio since 2007 and is a professor and interim chair of the anesthesiology department at the Joe R. and Teresa Lozano Long School of Medicine. He now carries a second business card as the founder and chief medical officer for his company, Olifant Medical, which he launched in 2018. He is working with UT Health’s Office of Technology Commercialization where he has filed patent protection for his invention. The University plans to license the airway device to Olifant.

He constructed a stylet with an ergonomic shape, and a built-in guiding technology that he believes will make inserting breathing tubes easier and faster, which can make a huge difference particularly in emergency care situations for first responders or military physicians.

“Video laryngoscopy moved the needle, but only incrementally,” Venticinque said. “Stylet technology has not benefitted from strong innovation. This device makes a disruptive advance in that space.”

Venticinque felt driven to invent this new airway device because of the variability in both the circumstances and experience levels for the person trying to establish an airway. Research shows that repeated attempts at intubation significantly increase the chances for the patient to experience complications such as cardiac arrest.

“Tracheal intubation is a foundation of acute care and is applied in the hospital, out of the hospital, by military and civilian alike, in the U.S. and internationally,” Venticinque said. “Yet, even in skilled hands this procedure can be difficult—when it doesn’t go well, it can be devastating for the patient and harrowing for the provider.”

Venticinque analyzed the problem by breaking down the process of intubation into its discrete steps in a process he calls “unlearning things to innovate,” because healthcare providers learn to develop workarounds over time. Using 1⁄4-inch copper pipe, a plumbing fitting, and some tubing from Lowe’s, he assembled a crude prototype that worked on a training mannequin.

“I had to learn to ask myself, ‘Why do we do it this way?’ because we develop habitual views of our workspace that make it difficult to reframe problems and opportunities that are right under our noses,” Venticinque said.

He started by using an engineering group for design, taking his illustrations for conversion into 3D drawings, but the iterative cycle took too long. The doctor learned computer-assisted design to develop the device illustrations himself and outfitted his home workshop with two types of 3-D printers to produce iterative airway device prototypes. Venticinque received a $25,000 grant from UT Health San Antonio to refine the technology and was able to buy a training mannequin and video laryngoscope for more prototype testing and validation. His do-it-yourself approach saved him time and money, as “outsourcing the prototype development can easily cost $500,000 or more in the early stages of creating a medical device,” he said.

“I would work with patients all day and have my 3D printers going all night,” Venticinque said. “The next day I would assemble the prototype, see quickly that it needed improvement, tweak the design, and redo the process all over again.”

Bootstrapping the development of his new airway device was by necessity. As a busy practicing doctor, he said there was no time to attend classes to learn the business side of biomedical entrepreneurship. It took over two years of iteration, validation, countless hours, and another small grant before Venticinque completed the new device, now called the Tusk Tracheal Cannulator.

“Dr. Venticinque used his clinical experience to not only identify an unmet clinical need and conceive of a next-generation intubation device, he designed and produced the prototype himself,” said experienced medical technology innovator Dr. Pratap Khanwilkar, vice president of product development at InCube Labs. “He reached out to others for help in engineering and business matters because he realized it takes a team to succeed in the medtech business.”

The doctor turned entrepreneur sees the new airway device as an advance in the standard of care in airway management, one that will join UT Health San Antonio’s portfolio of commercialized technologies. Venticinque formed a business team and a medical advisory panel for his company.  UT Health San Antonio assistant professor of emergency medicine Christina Bird, M.D., became one of Olifant’s advisors after seeing how the new device will improve patient care “to impact the ease and efficiency of intubation for providers,” she said.

‘“The need for a product like this was realized by taking a look at where previous devices have fallen short and asking what improvements could be made,” Bird said. “This … led to an innovative and sleek design that is also simple and intuitive to use.”

Olifant Medical’s market strategy is to initially target early adopters of airway management technology—those who only occasionally intubate patients, such as field medics, who will benefit most from a leveraging technology.

“To know that my device could be saving battlefield lives and making medic’s jobs easier and less stressful would be the best possible outcome, Venticinque said. “If that materializes, it will represent the perfect merger between UT Health San Antonio, our military, and San Antonio’s growing business community.”