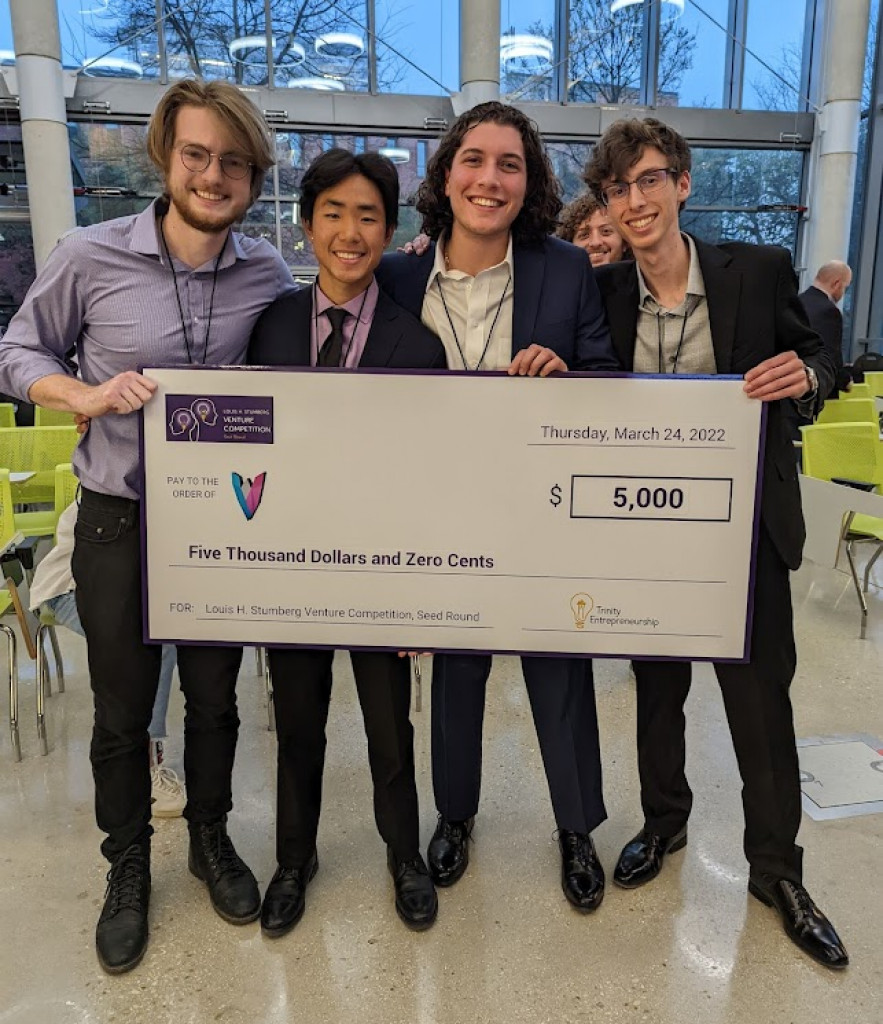 Since its launch in 2016, this two-part university-wide competition has encouraged Trinity student entrepreneur teams to compete for equity-free funding for their startups. A panel of judges typically chooses five teams to move onto the second and final round each fall. Each team receives $5,000 in seed funding, a spot in Trinity’s summer accelerator, summer housing on campus, mentorship, a credit hour, a year’s membership in the Geekdom startup co-working community, and $5,000 credit for Amazon Web Services cloud computing.

After completing the accelerator program this summer, finalists will return in fall 2022 to compete in the Stumberg New Venture Competition for the $25,000 grand prize. The competition is named after the late San Antonio businessman and civic leader Louis H. Stumberg, a member of Trinity’s board of trustees for many years. Stumberg was a well-known entrepreneur in San Antonio who founded Patio Foods and its line of Tex-Mex frozen dinners in the 1940s at the end of the Great Depression in the U.S.

“Trinity has invested $375,000 in student startups over the last seven years,” said Luis Martinez, director of Trinity’s Center for Science and Innovation. “These investments have led to over $6 million in additional outside investment and the founding of companies such as QuickSip Coffee, PatchRx, and HydroTek.”

“Our undergraduate student ventures have gone on to place as semi-finalists in the 2017 Draper Competition for Collegiate Women Entrepreneurs, finalists at the 2016 University of Maryland Cupid Cup, the 2018 TCU Values and Ventures Competition, and most recently, won first prize at the 2021 Baylor New Venture Competition,” Martinez said.

This year’s student teams chosen to compete for the Stumberg fall competition included:

Skelton’s beat band, for example, is a wearble metronome wristband that vibrates to help musicians stay on tempo. The device uses signal processing to synch up with the beat of any music and can be worn by musicians playing together without the distracting sound of a traditional metronome. “Drummers and hearing imparied musicians can’t hear a traditional metronome,” Lucas Riley said. “Since everyone on our team is an engineer, we can develop this ourselves. There’s nothing like this on the market today.”

Three runner-ups will not participate in the summer program and fall competition. However, each of these student startup teams will receive $1,000 for their startup.

Typically, judges select five teams as finalists, but Martinez said that the eighth year of the Stumberg competition (and the first held in-person since March 2020) yielded student startup teams of high caliber.

“Thanks to the generosity of our donors, all 10 teams tonight pitching will receive a cash award and a year’s membership to Geekdom,” Martinez said. “Each of the seven finalist teams will receive funding and services equal to $20,000 in value. Adding in the three runners-up’ cash awards brings the total value of what Trinity awarded tonight to $143,000.”

The winner of the 2021 venture competition was Microlev for its advanced technology that will aid scientists engaged in aerosol research. This women-led team of (now seniors) Josefina Hajek-Herrera and Bene Snyder are working with Trinity chemistry professor Ryan Davis on their optical equipment company that provides more accurate, innovative aerosol research instruments for scientists to isolate single droplets when analyzing assays and sensors.

“We’re looking forward to adding more successful startups to the 37 companies already launched over the past seven years of Trinity’s program,” Martinez said.

The featured image is of one of the seven finalists chosen in the spring 2022 Stumberg Venture Competition, the Skelton team.  Photo credit: Startups San Antonio.