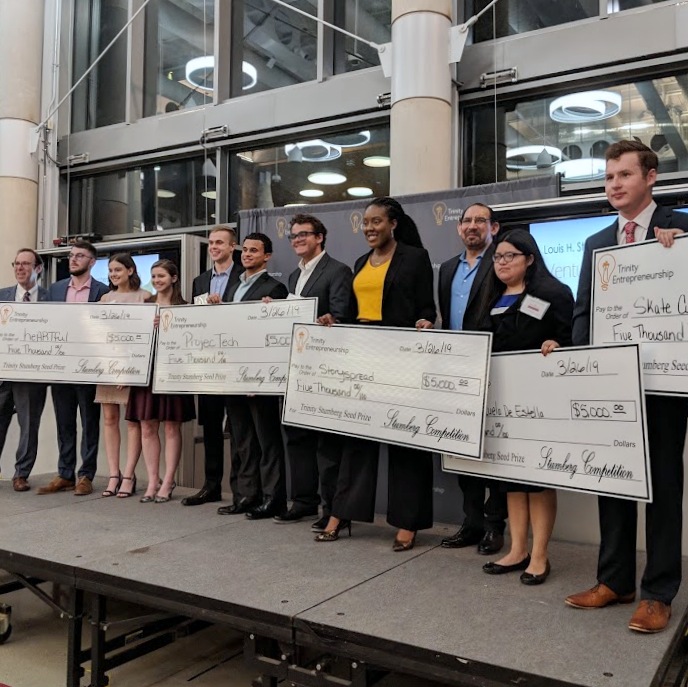 Five Trinity University student startup teams each received $5,000 checks Tuesday evening in a venture competition that will culminate in a $25,000 investment for one of the groups this fall. The winning teams ranged from a school to strengthen mariachi culture and community to a proposed technology to make motorcycle riding safer. Seven teams competed in the annual Louis H. Stumberg Venture Competition, which is in its fifth year.

“Every year the teams are stronger,” said Luis Martinez, who oversees the Center for Innovation and Entrepreneurship at the university. “We had teams who prepared and did their homework even before applying to the seed round of this competition.”

The competition is a two-part pitch event hosted each spring and the fall since its launch in spring of 2015. Each spring, Trinity student teams compete for one of the five $5,000 awards, with each team member winning a spot in the program’s summer accelerator, summer housing on campus, a $4,000 stipend, one credit hour, and mentorship. The grand prize award competition takes place in October at the entrepreneurship center at Trinity’s Center for Science and Innovation.

Unsell-Smith was impressed by the thoughtfulness and innovation in the teams’ business concepts. The judges spent over an hour reviewing each team’s pitch, as well as their lean business model canvas to assess their ideas.

“The students prepared well planned ‘go to market’ strategies—StorySpread’s was well researched, for example,” Unsell-Smith said. “The opportunity to enter an unserved market like ProjecTech is planning reflects the potential in their idea if they can get patent protection.”

Both Unsell-Smith and Martinez commented on how two of the five teams pitched concepts that addressed the needs of a niche community. The heARTful team talked to many mentors throughout the event about the special needs community and how to connect them to meaningful art experiences. La Escuela de Estella decided to focus its efforts first on the Southwest High School District because founder Estella Frausto noted how many mariachi musicians first learn to play by ear, rather than by learning how to read music.

Martinez, along with Carmen Aramanda, the center’s program coordinator, and David Girault, an entrepreneur in residence, worked with the student teams, coaching them as they prepared and refined their business concepts for presentation to the judges. For the teams that did not win, they will continue to receive mentoring and guidance from Martinez and the rest of the Center’s staff so that they can compete in next year’s Stumberg competition.

“We’re grateful for the support from San Antonio’s entrepreneurial community, as many of our students go on to work with more established ones, or receive feedback from founders who act as mentors,” Martinez said.

The students also get to talk to past Stumberg winners like PATCH co-founders Andrew Aertker and Gavin Buchanan, who attended the seed round event Tuesday evening. Buchanan is currently serving as the resident advisor for Trinity’s first-year residence Entrepreneurship Hall, where the three freshman teams reside.

“Our student teams are getting more competitive each year because of several factors—they’re preparing earlier, they’re connecting to our entrepreneurial community more, and they’re getting great exposure to student entrepreneurship from the start in Entrepreneurship Hall,” Martinez said. “We’re looking forward to seeing their final pitches in the fall.”