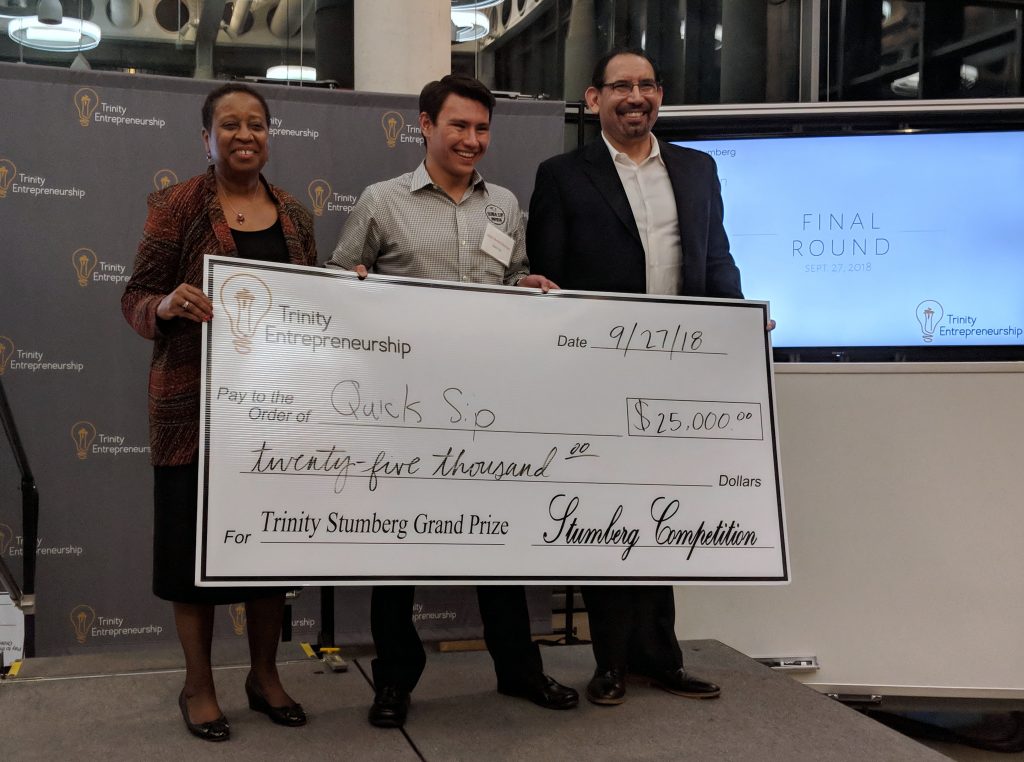 But that is not the entire story.

The competition was fierce among the four finalist teams. The Stumberg competition is a two-part pitch event hosted each spring and the fall. This year’s finalists emerged out of 10 original teams that competed in the seed round last fall and included the grand winner of the $25,000, Quick Sip cold brew bottled coffee. The four finalists each won $5,000 in seed funding in March and participated in Trinity’s accelerator program over the summer.

Of the remaining three finalists, a close second was PATCH, or Pill-Administering Technology for Compliance Healthcare, a smart pill bottle that tracks patient compliance in taking medicine during clinical trials. Intersourcing, a service to connect U.S. businesses to overseas manufacturing and MONA, an augmented reality (AR) app that enables users to use real-world objects like embroidered patches to project three-dimensional AR also competed for the $25,000 Thursday.

PATCH was announced as the audience’s favorite startup based on results from a voting app, but they received no cash award. In an Academy Award-like mix-up, PATCH was also declared the grand prize winner of the $25,000.

Quick Sip was, in fact, the judges’ choice for the $25,000 award. The inadvertent confusion between the two finalists revealed how close the deliberations were between Quick Sip and PATCH.

“Both teams were such strong candidates,” Luis Martinez, director of the Center for Innovation and Entrepreneurship in the university’s Center for Science and Innovation, said. “It was a difficult decision.”

One of the judges, VelocityTX CEO Randy Harig, explained why Quick Sip was chosen as the $25,000 Stumberg competition winner.

“Quick Sip is quicker to market and hence, will see a return faster for investors,” Harig said. “They already have revenue-producing customers and great growth. PATCH will take longer to see a return and is riskier. As an investor, I look for the quick return on investment, so that’s why we chose Quick Sip.”

Quick Sip coffee founder Jacob Hurrell-Zitelman, class of 2020, has grown his startup by 850 percent over the past two months. Hurrell-Zitelman has retail partnerships in 19 different locations throughout San Antonio and one in Kerrville. The business administration major realized there was demand for high-quality bottle cold brew and launched his company in August 2017. He has grown his team to five full-time employees and will use the prize money to scale quickly.

“I wanted to make high-quality coffee available for those who can’t go to coffee shops,” Hurrell-Zitelman said. “The prize money will help us do some R&D [research and development] and packaging, as well as grow the company to meet the demand for our coffee.”

PATCH co-founders freshman Andrew Aertker, a computer science major, freshman Gavin Buchanan, a mathematical finance major, and senior Nathan Dullea discovered a market for tracking patient compliance taking medication in clinical trials. Since the spring competition, the startup has established their C-corporation and have a patent pending for their universal pill bottle cap design, which can fit on different bottles. The founders are already working with the San Antonio-based Real Time CTMS, a company that specializes in clinical research trial software systems, to develop the software to be integrated with the PATCH bottles.

The PATCH team used the $5,000 seed money to develop the bottle prototype. They had planned to use the $25,000 to secure Food and Drug Administration (FDA) approval, develop a bottle mold for larger scale manufacturing, and pay pharmacies for packaging the drugs in the bottles for use in clinical trials if they won.

“We raised $100,000 in private funding over the summer,” Aertker said. “We’re focused on continuing with PATCH no matter what.”

About forty minutes after the competition ended, Martinez emailed an update to the competition’s results. Two anonymous donors had stepped in to contribute $10,000 as a runner-up award for PATCH.

For the first time since its inception in spring of 2015, the Stumberg competition has yielded not one, but two winners in its final round. The competition has invested more than $180,000 in prize money to 21 student start-ups, which range from international Colombian tax firm Coldeclara to outdoor camping company Relax and Do Designs (RADD). Martinez said 17 of 21 Trinity student-founded companies are still in business.

If the measure of effectiveness for Trinity University is the number of successful student-founded businesses, tonight’s Stumberg venture competition with its unexpected runner-up $10,000 award only adds to the university’s proven track record of fostering entrepreneurship in college. Student founders retain full ownership as there is no equity share required in exchange.

“Our student founders often go on to compete in national and international pitch competitions and do well after their experience in the Stumberg competition,” Martinez said. “I expect the companies formed for this year’s competition will only add to the impressive total to date of companies still operating.”