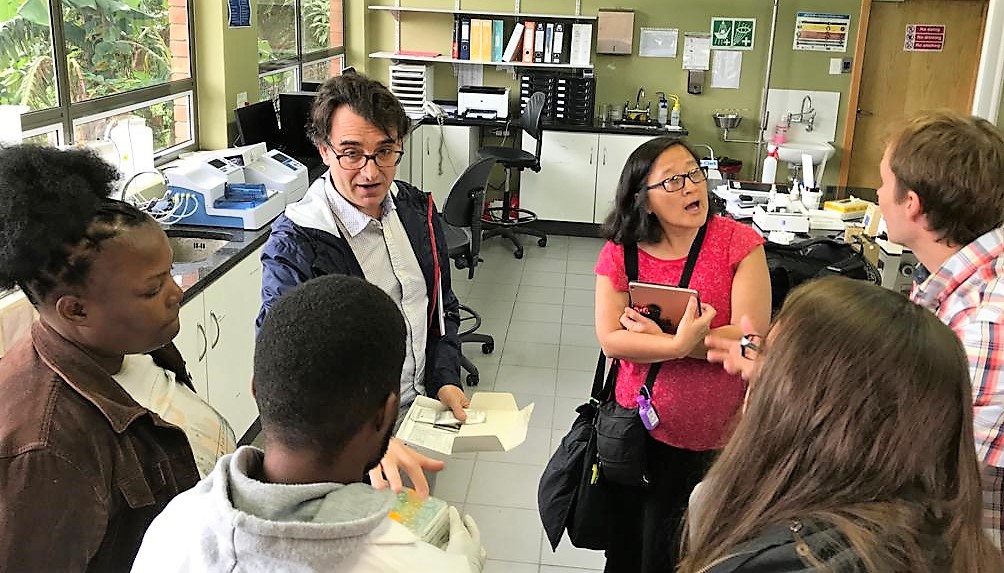 The world’s deadliest infectious disease is more common than you think. Tuberculosis, or TB, kills 1.6 million people every year and is one of the top 10 causes of death globally. Over 95 percent of cases and deaths are in developing countries, according to the World Health Organization (WHO).

Texas Biomedical Research Institute (Texas BioMed) researcher Jordi Torrelles, Ph.D. knows these numbers well — he specializes in tuberculosis research. He developed a TB test that has been adapted for the challenging conditions typically encountered when diagnosing TB in developing countries.

Torrelles traveled to Mozambique, Swaziland and South Africa in early 2019 to put into place research collaborations for testing a cheaper, faster, easier way to diagnose TB. The low-tech, low-cost test will help developing countries provide healthcare under challenging conditions where there is little or no access to electricity or running water. The commercially available TB test that is widely used costs $608, as compared to the projected cost of the improved test which can be as low as $9 per test, according to Torrelles.

“The way it’s done now, it takes 42 to 60 days before you get results from a TB test,” Torrelles said. “That’s before the patient is informed of results. When you factor that in, it’s more like 65 to 80 days from when the patient gives a sputum sample to when they learn whether they have TB.”

That lag in informing the infectious patient potentially translates into more days someone may be unknowingly spreading TB to family and friends.

The current test also does not indicate if a person is infected with drug-resistant strains of TB. WHO reported there were over 550,000 cases of drug-resistant TB cases in 2017. These patients are even more difficult to treat, as they do not respond to the most commonly used TB drugs, requiring expensive, lengthy treatment.

“In the cases of extensive or extreme drug-resistant TB, patients take up to 30 different drugs daily for up to two years,” Torrelles said. “In the worst case of total drug resistance, it can cost $500,000 to treat someone with extensive TB over 18 months.”

Torrelles used an agar or solid-based media test developed by researcher Carlton A. W. Evans while he was at the John Hopkins Bloomberg School of Public Health.  The round testing plate is divided into four quadrants to show if the patient is infected with TB and whether the bacteria type or strain is resistant to three commonly used drugs for treatment.

Dr. Shu-Hua Wang from The Ohio State University and Holden V. Kelley in Torrelles’ lab at Texas BioMed assisted Torrelles in using Evans’ test to develop a 12-well color plate that can test for resistance to 11 drugs. The team developed two versions, one diagnostic, the other a treatment tracking version to check if the patient is responding to the treatment.

“If you have drug-resistant TB you need to get tested monthly afterward to see if your case is clearing up or not,” Torrelles said. “And that gets expensive.”

Normally one can see results in 21 days for TB strains that can be treated with drugs. Drug-resistant TB strains take longer to grow which is why can take up to 80 days to see results. Torrelles used chemicals in the improved version of the test to accelerate the growth of bacteria for faster results that are easier to read.

If the Texas BioMed test plates are kept refrigerated a health care professional can see results as soon as three to 14 days, Torrelles said. However, many health care facilities in developing countries do not have access to refrigeration. The improved test does not require it—should the diagnostic test be kept at room temperature, results can be interpreted between three and 19 days.

Torrelles’ paper published by the National Institutes of Health this week showed the tests used in Ethiopia from March 2016 to February 2017 were “a good alternative method for screening of TB and selective drug resistant-TB in a timely and cost-efficient manner,” according to the authors of the study.

“The beauty of this test is that most others require decontamination steps calling for expensive chemicals, while this one only requires a mixture of different kinds of readily available salts to decontaminate it,” Torrelles said.

Plans include preclinical trials using the improved test with TB patients in Mozambique and the Democratic Republic of Congo, the researcher said. As for long-term plans to bring this test to the marketplace, Texas BioMed is taking steps to develop potential commercialization pathways for scientific advances developed by its researchers.

Texas Biomed has secured the services of the intellectual asset management partner Tremonti Consulting to identify potential intellectual property (IP) assets and develop a strategy for licensure as part of Texas BioMed’s ten-year strategic plan. The Institute is undertaking an IP audit to identify research with the potential for filing invention disclosures and assess the value of licensing, Texas BioMed Assistant vice president for Communications Lisa Cruz said. Torrelles’ technology will undergo this evaluation by the Institute’s outside partner to assess next steps in licensing and commercialization.

“Because of my medical background I have been working in different places around the globe where resources are at a minimum,” Torrelles said. “If I can contribute a little bit to improving health care, I want to do what I can.”

Featured image is of (from the left) Texas BioMed researcher Dr. Jordi Torrelles talking with Dr. Shu-Hua Wang (in the red shirt) and Dr Michael Kay and his team (Kay is to Wang’s right) at the Baylor College of Medicine Children’s Foundation in Swaziland.  Texas Biomed courtesy photo.