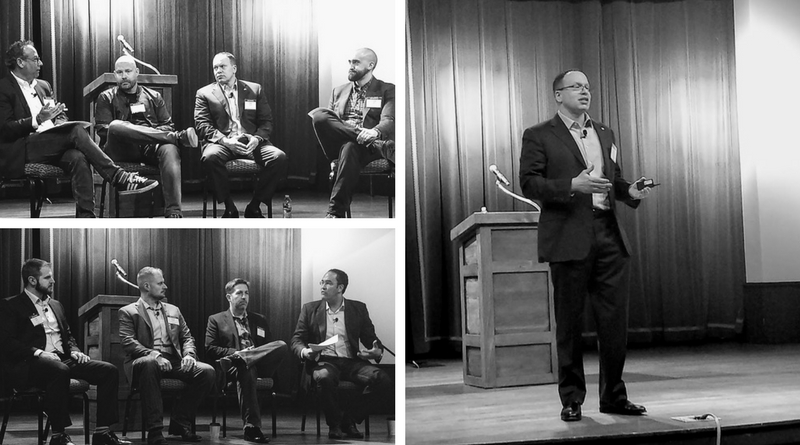 Local ‘techpreneurs’ were in the audience and on the panels at San Antonio Tech: Seizing the Momentum, Xconomy‘s first public event in San Antonio. The half-day forum at the Pearl Stables united some of Central Texas’s most successful entrepreneurs and innovative technologists to discuss San Antonio’s tech ecosystem and its future prospects.

For a company that has grown from three Trinity University students founding a startup in 1998 to the industry leader in the multicloud managed service market as independently assessed by Gartner analysts, Rackspace is the indisputable anchor in San Antonio’s tech community.

Rackspace’s chief operating officer David Meredith focused on the company’s vision of a seamless single “pane of glass” across public and private cloud computing that provides an integrated service management platform built on automation and artificial intelligence. Rackspace has tripled its global footprint over the past year with 38 data centers positioned around the world to serve multinational customers better. With the hundreds of terabytes of data flowing thru Rackspace daily, the company is looking at predictive analytics to leverage data and anticipate problems that might occur for its customers, Meredith said.

No forum would be complete without a panel on cybersecurity, as San Antonio is second in the nation as a recognized center for defense-related cybersecurity missions. U.S. Rep. Will Hurd moderated the panel, which included Jungle Disk’s Bret Piatt, Infocyte’s Chris Gerritz, and Jacob Stauffer from Coherent Cyber. Panelists discussed the challenges in attributing and deterring cyber attacks and cyber vulnerabilities in U.S. voting systems. Hurd asked the cybersecurity startup founders for their take on needed skills for future cybersecurity future jobs.

Stauffer emphasized the importance of industry mentorship for students to expose them to potential cyber careers. For Piatt, students should be able to select computer languages instead of or in addition to languages like French or Spanish. Gerritz stressed practical skills for students as well. “They know how to use devices but don’t know how they work,” Gerritz said. “They need to learn how these devices work.”

While Rackspace represents the mature tech company in San Antonio’s ecosystem, many San Antonio startup cybersecurity companies face the same challenges other startup founders must address—finding talent, investors, and connections to grow their companies to the next level. Rackspace’s Meredith, joined by entrepreneur and investor Pat Matthews and VelocityTX director Jorge Varela, explored some of these challenges for San Antonio’s next generation of entrepreneurs.

Varela cited the increase in new entrepreneurs starting businesses in the San Antonio-New Braunfels metro area during 2016 compared to 2015, according to Ewing Marion Kauffman Foundation’s latest data. During 2016, about 380 out of every 100,000 adults became entrepreneurs locally, an increase from 280 in 2015. San Antonio also moved up 8 spots to No. 6 on the national list of top metro areas for startup activity in the past year. Miami, Austin, Los Angeles, San Diego, and Las Vegas occupy the top five positions.

Kauffman researchers have examined 355 U.S. metropolitan areas and found that some factors have a positive relationship to a strong ecosystem, while other factors remain unproven. Some benefits such as a Tier One university in a city’s downtown can help jump-start startup growth. The Kauffman Foundation also found many are not statistically significant, an encouraging finding since cities do not possess identical resources and assets.

Varela stressed that “the same problems we are experiencing here—the crunch in series A funding— are the same in other places.” He also discounted another myth: Without venture capital financing, an ecosystem cannot flourish.

“The money is here, guys, what’s happening is that we’re not talking about it,” Varela said. He pointed out that he had just raised $9 million in two weeks for a startup VelocityTX is mentoring. “The talent is here, the risk takers are here, the funding is here.”

Matthews emphasized most entrepreneurs need mentorship, which can help San Antonio retain talent and encourage startup founders to join the ranks of the local experienced entrepreneur community. “A lot is happening downtown and we’re getting some density,” Matthews said. “There are more angel investors here now. I do think there is a long way to go.”

RealCo’s Michael Girdley, Active Capital’s Cat Dizon, Claire England from the Central Texas Angel Network, and Alamo Angels’ Chris Burney shared how entrepreneurs can find investors. The resounding advice was to prepare, practice, pitch, and repeat, to stand out from the entrepreneurs who do not prepare or educate themselves on investing.

“We want to make sure you understand what it means to go out and raise money,” Burney said. “Our investors make money when you sell your company or it goes public, so it’s important to realize what equity you’re giving up in exchange for investment.”

Girdley noted the trend of tech companies like Funnel AI and Grok Interactive moving to San Antonio, and also advised founders to look at a prospective investor’s portfolio to make sure of a good match for your company. England recommended founders look at the due diligence checklist on the Central Texas Angel Network website before searching for investors and read books about how to raise money well (here’s a list to get you started).

Focusing on a niche you understand often helps the founder address it in a groundbreaking manner. “Tech entrepreneurs need to understand the problem and set out to solve it,” Port San Antonio vice president for business development Jim Perschbach said.

“The (medical) credentialing issue was poised for a tech solution,” Jonathan Larson, a medical doctor and MedSpoke founder said. “I experienced this problem myself so I set out to solve it.”

In response to his grandfather’s fall and subsequent death, Wilmink created a patented Bluetooth antenna and other technologies that evolved into a suite of wearable IoT devices. “We’re looking to solve a variety of problems with custom sensors designed to solve specific challenges,” Wilmink said.

Connections also pose a challenge for entrepreneurs, as many often work in isolated industry silos. Pratap Khanwilkar, vice president at InCube Labs, works with medtech companies to help them develop a clinical breakthrough into a commercial success, both with InCube’s bioscience incubator and via The Health Cell’s workshops for scientists on commercializing health tech. Britton is bringing clean energy solution innovators together at the Epicenter, launching its first incubator cohort this spring. Port San Antonio provides a center of gravity for San Antonio companies with talents in cybersecurity, aerospace and aviation, robotics and advanced manufacturing with its Project Tech opening this spring also.

Graham Weston, former chairman and CEO of Rackspace and investor in the company joined Geekdom chairman Lorenzo Gomez to share their views on entrepreneurship and the future for San Antonio’s tech community. Weston firmly rejected the notion “that any town is optional for raising money.” Except for San Francisco and New York City, this does not hold true as all other cities must raise money from elsewhere.

“I want this city to be good enough for my kids to come back to,” Weston said. “Ultimately being able to attract the best and the brightest is the challenge for the next decade.”