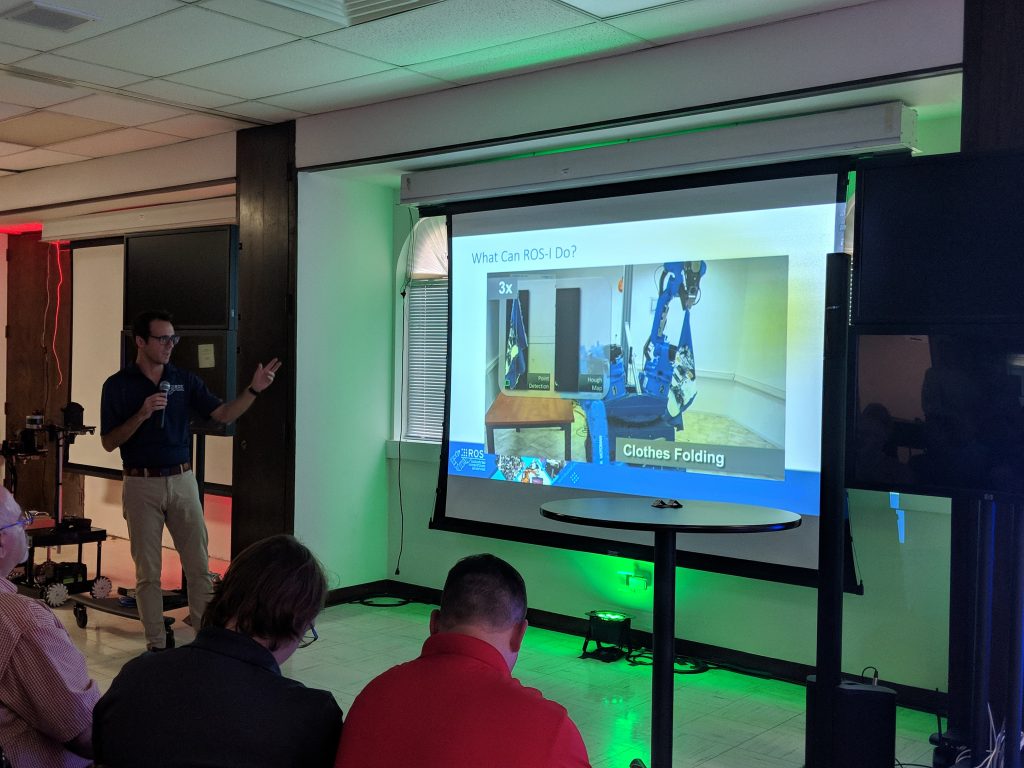 Over 75 people crowded into a meeting space Thursday at the San Antonio Museum of Science and Technology (SAMSAT). The big draw was robotics at the inaugural meeting of the new SATX Robotix meetup group. Its mission is to organize and grow San Antonio’s robotics community to meet the anticipated demand for specialized expertise.

Shaun Edwards and Paul Hvass are two former Southwest Research Institute (SwRI) engineers and current co-founders of Plus One Robotics. The duo, with help from others in the robotics community, organized the first SATX Robotix Meetup at SAMSAT. Edwards explained the goal for the group was “to establish San Antonio as a significant and quality contributor to ROS.”

ROS—short for robot operating system, is open-source software used as the operating system of a robot. The ROS system was created for personal robots in 2007 at the Stanford University Artificial Intelligence (AI) Laboratory. ROS provides the common framework for robotics applications and is used by the research community for service robotics applications, but is applicable for other applications, including industrial robotics. By 2011, manufacturing and logistics industries began using ROS open source code repositories for their commercial robots.

“It’s not widely known, but there are a good number of roboticists in San Antonio,” Edwards said.  “The global [robotics] developer network that has developed has been incredibly valuable, so I would like to create a similar community and network in San Antonio.”

There are at least one hundred robotics researchers at SwRI, Edwards estimates. Several startups in San Antonio, including Reckon Point and Plus One Robotics, also employ roboticists.  As Plus One Robotics has worked to get its new robot technology to market, several investors have asked the startup to leave San Antonio over concerns about local robotics talent availability.

“I firmly believe this means that Plus One needs to be proactive in building up and organizing San Antonio’s robotics community,” Edwards said. “And we’re not the only company that needs this talent—our objective is to help those in the field find local jobs in robotics.”

The move to automation is coming faster than many may realize. More than half of all workplace tasks will be done by machines by 2025, according to the World Economic Forum’s latest Artificial Intelligence job forecast. The robust attendance at the first robotics group meeting reflects interest not just from those working already in the field.

“I was surprised to see business and marketing people, UTSA grad students, and robotics enthusiasts outside of SwRI,” said Kris Kozak, a SwRI researcher in their Intelligent System division. “There are only about 10 to maybe 20 SwRI robotics people here.”

Immediate plans for SATX Robotix include organizing a ROS hackathon, working on an AI virtual assistant, broadcasting computer vision from robots, and developing open source reconfigurable flexible manufacturing systems using robots. Data scientist Rey Medina from USAA came to learn about robotics and machine learning because he “would like to get involved in future ROS hackathons,” he said.

“We’re on the verge of a robotics explosion, so this group will help develop the robotics community into a self-sustaining center of robotics expertise,” Kozak added.

Edwards asked for volunteers to help run the SATX Robotix meetup as well as to join the group’s steering committee to set the vision for the community and measure its progress. SATX Robotix is also looking for sponsors.

“I’m encouraged by the turnout of people passionate about robotics, so now we need to keep that momentum going and reach into local universities,” said Matt Robinson, SwRI researcher, and current program manager for the ROS-Industrial consortium in the Americas. “We want to build on the community of people who share our passions to keep companies that need robotics talent and attract more to San Antonio.

Andrew Schuetze founded one of the original FIRST Robotics Competition (FRC) teams in San Antonio. He is director of the FIRST Tech Challenge (FTC) program for the Alamo region and is scaling the program across Texas. FIRST has educational robotics programs designed for students from kindergarten through high school.

Schuetze said this trend has held steady for the past six years with program alumni now entering the local and regional workforce as engineers and computer programmers.

“I knew there is a big robotics community here; ours is bigger than Austin’s,” Edwards said. “It’s a matter of organizing that expertise into a group.” “If we want young people to grow up here and stay, we need to reach out to them when they’re young.”

For more information or to volunteer, contact the SATX Robotix meetup organizers at their meetup page.