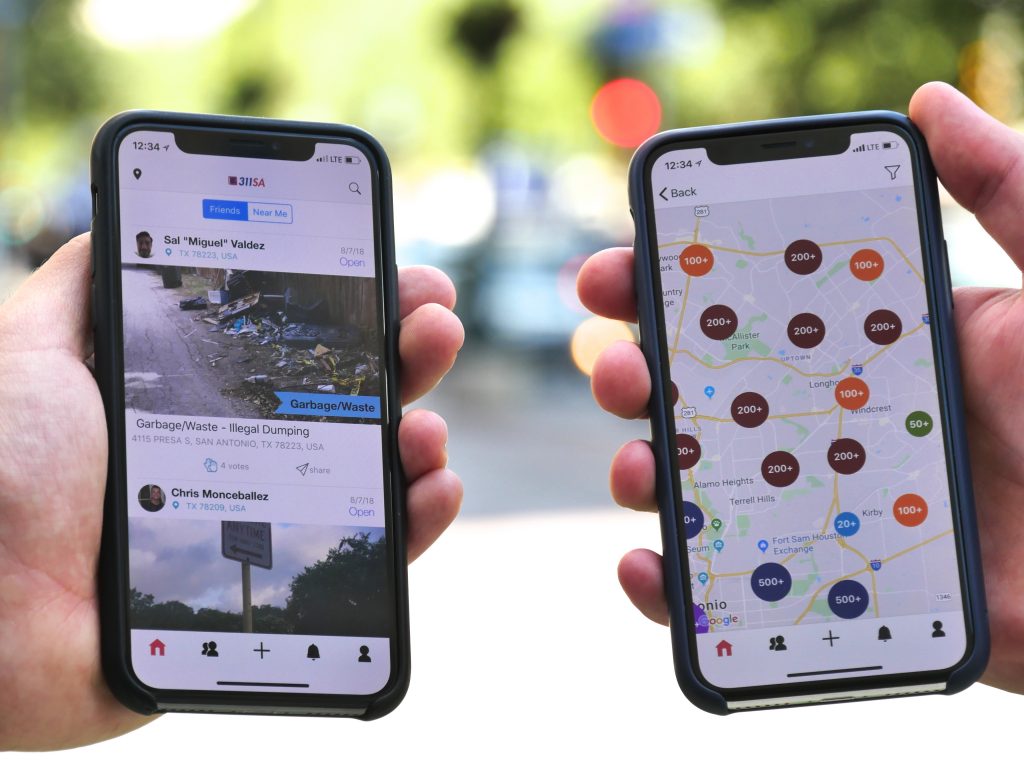 The City of San Antonio’s 311SA interactive civic engagement application received the Smart 50 Award as one of the world’s top 50 most transformative smart projects for 2019.  The Smart 50 Awards, in partnership with Smart Cities Connect, the Smart Cities Connect Foundation, and US Ignite, annually recognize global smart cities projects, honoring the most innovative and influential work.

San Antonio is the only city on the list of 50 awardees with two projects that were recognized with a Smart 50 Award. Leaptran won the award for their San Antonio Technology Center (SATC) building energy monitoring and control for a cost-effective building heating ventilation and cooling system.

In August 2018 San Antonio launched the new 311SA cellphone app that Cityflag had developed so residents can use it report municipal issues to the city.

“This award validates how San Antonio is looking to leverage the next generation in technologies to build a foundation as a smart community,” Cityflag founder Alberto Altamirano said. “There were submissions from over 12 countries and our project was selected.”

The Smart 50 Award list of selected projects includes cities in countries such as Israel, India, and Canada, Portugal, and France, as well as U.S. cities.

Cities are developing new avenues for civic engagement using a technology most residents already possess—a smartphone. In the U.S., 80 percent of all mobile phone users use a smartphone. The emergence of interactive municipal apps as a new means for citizens to report issues is spreading as cities look for more ways to engage with its residents.

The 311 app allows San Antonio residents to upload photos of municipal problems such as a downed street sign or graffiti and geotag it using Google Maps. The reported issue gets highlighted with a red flag until City employees use Cityflag’s “citizen relationship management system” to acknowledge the problem which turns the flag yellow. App users can vote on the severity of issues reported by other residents in the community and can earn points and badges for their activity within the app. The top-flagged issues appear on the app’s “urban feed” and once addressed, the issue’s flag changes from an open green flag to a closed blue one once resolved.

The 311SA app, available for download in the iTunes and Google Play online stores, is creating a boost in civic participation in the city. Since launch, more than 10,000 San Antonio residents have started using the app, submitting over 8,000 requests. The success rate is currently at 93 percent.

Paula Stallcup, assistant director for communications and public affairs for the City of San Antonio and senior manager for the City’s 311 services, has been involved in the 311SA app development since its start. Previously the City had a reporting app, but it lacked interactive features and did not give users visibility on the City’s responses. With almost 800,000 calls to 311 annually, the newly developed 311 app offers residents an interactive way to communicate with the City, Stallcup said.

“The app is different from what you might expect in a city services app,” Stallcup said. “We are excited about the functionality within the app—people can report an issue 24/7 and not have to remember to call the City in the morning.”

Cityflag is an agile team of seven composed of co-founders Altamirano, Bravo, and chief of operations Beto Gomez plus engineers and developers. In August 2018 the startup launched a 311 app for Mission, Texas, a city of about 100,000. Their third implementation was for a population much larger than the two Texan municipalities combined.

Cityflag worked with one of the 16 boroughs of Mexico’s capital Mexico City, Cuauhtémoc. Their 311 app services the five million people who live and work in the center of Mexico City. Cityflag developed and launched a mobile app and customer relationship management (CRM) platform to monitor the water distribution operation in the municipality of Cuauhtémoc. In November 2018, Mexico City experienced water shortages impacting 900,000 people during maintenance and repairs of its Cutzamala system, one of the largest water systems in the world serving a population of over 22 million people. Cityflag deployed a mobile app and dashboard to monitor real-time water distribution throughout the municipality of Cuauhtémoc.

“We’ve shown how we can handle a population as small as Mission to San Antonio’s 1.2 million all the way to Mexico City’s five million in a part of the city that is not even fully digitized,” Bravo said. “We use an agile approach with our ‘plug and play platform’ in digitizing a city’s civic engagement ecosystem.”

Cityflag has received national attention for the success of 311SA and was featured in 2018 in StateScoop magazine and Smart & Resilient Cities magazine. The Smart 50 Award places the San Antonio tech startup on par with innovative global projects recognized for their municipal-scale impact and application.

Altamirano has hinted at more good news for Cityflag to be announced in late winter. Altamirano is no stranger to recognition, having been named one of Forbes 30 Under 30 for 2018. This time, the recognition will be for the civic engagement application Cityflag developed for the City of San Antonio.

“Cities are increasingly under pressure—leveraging innovation and technology to solve increasingly critical urban problems can help shape the future of cities,” Altamirano said. “Cityflag looks forward to playing a role in that transformation.”