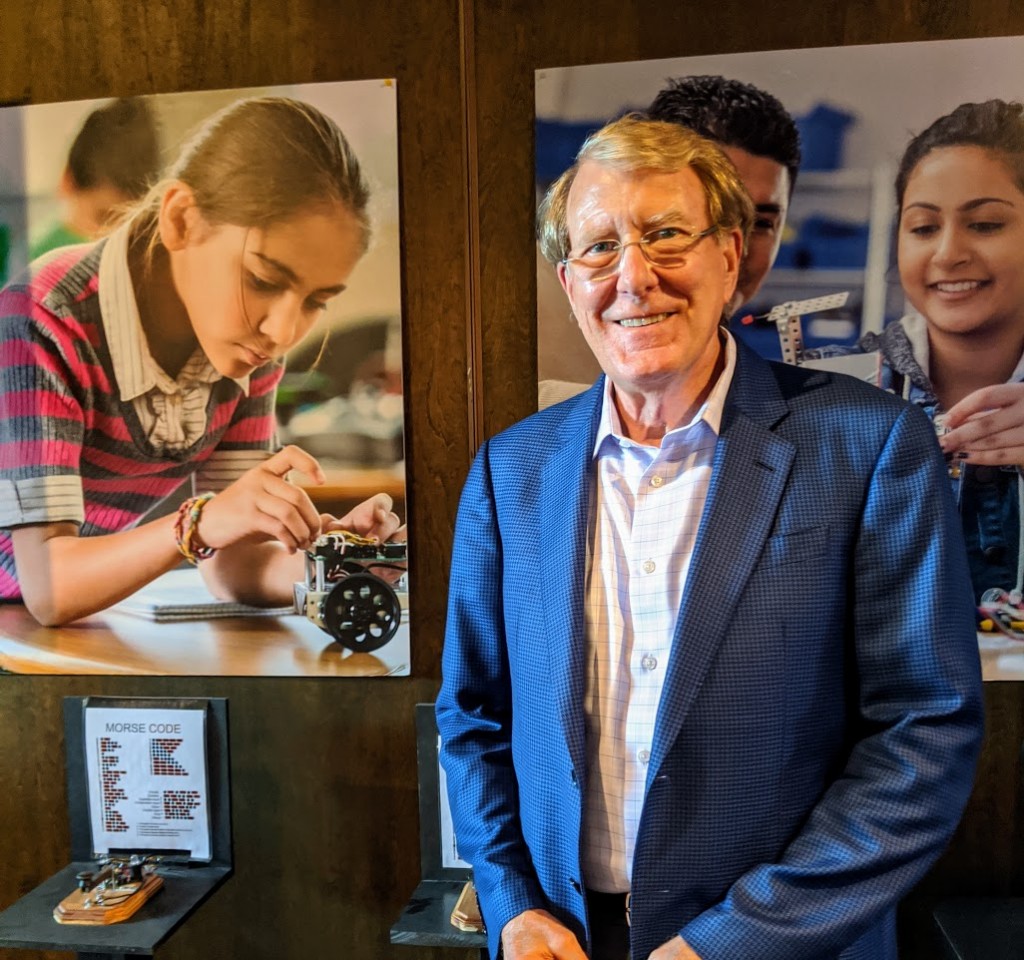 There hasn’t been a quiet day since Douglas King started in mid-March as the new president and CEO of the San Antonio Museum of Science and Technology (SAMSAT). At about the same time as the COVID-19 pandemic restrictions went into place, King was learning about the world-class collection of historical science and technology artifacts housed at Port San Antonio in the former Kelly Air Force Base chapel.

The early-stage technology and science museum has been the centerpiece of the Port’s planned innovation hub since SAMSAT founder, innovator, and entrepreneur David Monroe moved his collection to the Port in 2017. Conceived as a hub for science, technology, engineering, and math (STEM) innovators and entrepreneurs to work alongside industry partners, the Port’s innovation center, once completed, will also include the expanded new home for SAMSAT.

King, who is a seasoned science and technology museum professional, is enthusiastic about taking SAMSAT to the next level. He will oversee the museum’s evolution from an early-stage museum into a fully-fledged STEM education institution as it prepares to move from its current 4,000 square-foot preview space into the 20,000 square feet within the innovation center.

“What attracts me to this project is SAMSAT’s mission,” King said. “This isn’t just a museum. We’re here to change kids’ lives so they can become inspired and join the tech workforce.”

From NASA to San Antonio

Before moving to San Antonio, King was president and CEO of the Seattle Museum of Flight in Seattle from 2010 to 2017. The Museum of Flight is the largest non-governmental air and space museum in the world, and one of only 900 museums in the nation accredited by the American Alliance of Museums.

King joined the Museum of Flight after 15 years of leading the Saint Louis Science Center, the fourth largest in the country. He previously served for five years as president of the Challenger Center for Space Science Education. The Center was founded by June Scobee, widow of Challenger Space Shuttle Commander Dick Scobee, to continue the crew’s educational mission.

Before working in STEM museums and education, King spent nearly 20 years in the electronics industry as an engineer in Silicon Valley. In addition to the many high-level advisory positions King has served in the STEM field, the NASA Administrator appointed King as chair of NASA’s Education and Public Outreach Committee, the NASA Education Advisory Committee, and as a member of the NASA Advisory Council.

“We are incredibly fortunate to have someone of Doug King’s stature and character join SAMSAT at this stage of our development,” said Cliff Zintgraff, former executive director and now its chief learning officer. “His decades of deep experience and commitment to community impact will serve SAMSAT well as we accelerate toward our move into the Innovation Center.”

Next Steps for SAMSAT

Over the past two years, SAMSAT has averaged about 20,000 visitors annually at its temporary location inside the Port’s former chapel at 102 Mabry Drive. Short term, King said the focus is on retooling its various STEM education programs and in-person summer camps typically held at SAMSAT into an engaging online experience.

“We’re looking forward to hopefully reopening our preview center in July,” King said. “Our plans for summer camps include a combination of smaller in-person classes and online content.  In the fall, we’re planning to support teachers and their classrooms with the pandemic in mind.”

Longer-term, King, Monroe, Zintgraff, and SAMSAT volunteers are planning for the move to the Port’s innovation center, where “we will strive to have an impact on every student we can reach” King said.

Thinking he would retire, King visited family here and wound up moving to San Antonio two years ago. After he became involved with the Air Power Heritage Foundation, King met Monroe, who was leading SAMSAT at the time. By early 2020, King knew that taking SAMSAT to the next level would become his mission after a lifelong career in STEM education.

“There’s an opportunity, given the Port’s leadership in building an innovation center that includes an expanded home for the museum, for SAMSAT to make a difference in so many lives,” King said. “If we can show the students pathways to careers in advanced tech and science, we can help build a tech and science workforce by showing these young people the way to a better future.”

The Port is on track with an aggressive timeline to have the innovation center operational sometime in 2022 or sooner, according to Port president and CEO Jim Perschbach. Updated renderings are available for viewing on the Port’s website.

“Doug has a proven track record of taking SAMSAT beyond being a place to visit on a school field trip to becoming an inspirational source of STEM education programs for students,” Perschbach said. “The museum will play a crucial role in the innovation center by inspiring many to pursue STEM careers. Coupled with the innovation center’s job training programs, it’ll mean more advanced tech job opportunities for San Antonio.”