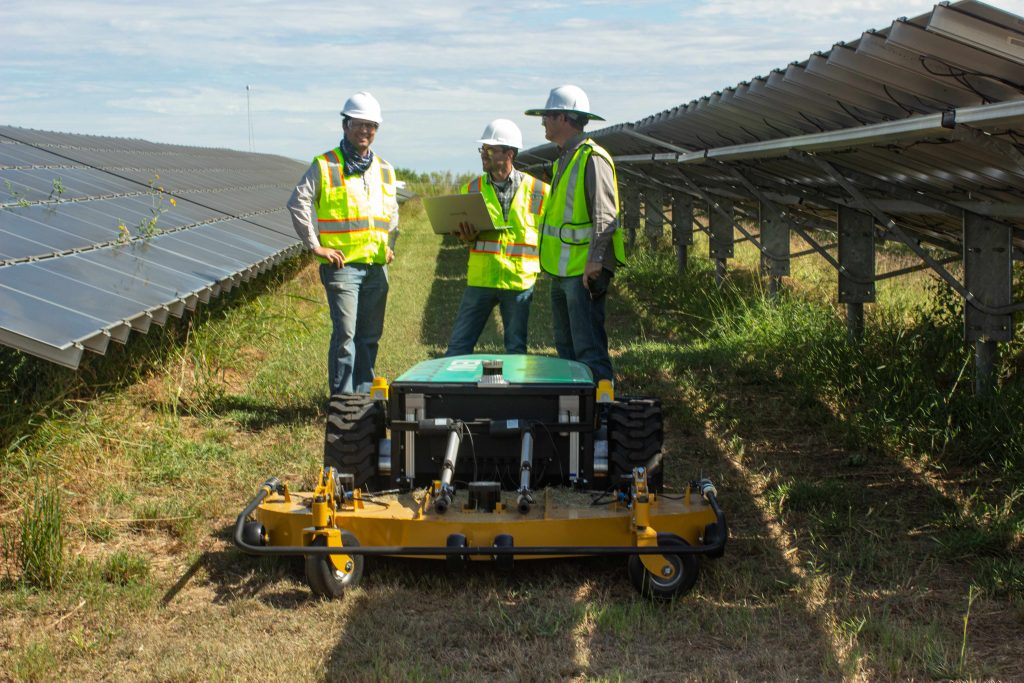 Wind and solar make up more than three-quarters of the electricity capacity coming online in the country this year, according to the U.S. Energy Information Administration (EIA) 2020 Annual Energy Forecast. Globally, wind and solar energy generation is expected to grow four to five times faster than every other source of power between now and 2050, this McKinsey study concluded.

Company founders Michael Eyman and Tim Matus launched Renu Robotics in 2018 after they recognized the opportunity posed by the rapidly growing solar market.

“We wanted to leverage the combined technologies of autonomous vehicles, internet of things, and robotics to help support renewable energy and improve the environment,” Matus said.

The duo decided to build their company in San Antonio in part because of the available local expertise. San Antonio has a sizable robotics community and autonomous vehicle expertise fueled by Southwest Research Institute’s substantial autonomous technology and robotics programs and emerging robotics companies.

Plus One Robotics co-founder Shaun Edwards is an adviser for the startup.

“Tim has nailed the big opportunity — he’s entered a space where the problem is real and solvable,” Edwards said. “It’s a robotics company with a good business opportunity.”

Eyman is chairman of Renu’s board and also oversees operations and maintenance at Origis Services, where he works with the owners of enterprise solar facilities to address their operational issues. He outlines the case for Renu Robotics’ autonomous robotic mowers at solar farms.

The plummeting cost of installing solar has made it the most cost-effective source of power. Solar operations are “incredibly efficient—a100MGwtt plant only requires two people to operate it,” Eyman said.

“A new solar farm has 70 percent of its costs in its operational phase,” Eyman added. “The costs 30 years after it’s built are for labor, and there’s no way to bring those people costs down unless you bring in innovation and automation.”

This is the world Eyman works in. Fixed costs for technicians to perform preventive and corrective maintenance means solar operators look to save money on vegetation management, panel cleaning, and herbicide spraying.

“These costs make up a third or more of the operation budget for solar facilities,” Eyman said. “It’s incredibly labor intensive and expensive.”

With Matus’ background in both engineering and business management and Eyman’s expertise in solar industry operations, the two crossed paths professionally and became friends. The co-founders talked about starting an engineering and manufacturing company together and quickly zeroed in on Eyman’s perennial search for a way to reduce the costs of vegetation management in the solar industry.

Within a couple of months “we were prepping units,” Matus said. “There’s a $24 billion opportunity in the U.S. alone for this system.”

“In contrast to self-driving cars on roads with traffic, solar farms are places where you can restrict access and control the environment to use these capabilities,” said Kris Kozak, former SwRI engineer and co-founder of Hatchbed, a robotics research and development (R&D) consulting company operating out of Port San Antonio. “Renu’s mower is an application that’s well suited for autonomous automation outdoors.’

Renu Robotics has two patents pending on the self-driving technology for its RenuBot tractor. The RenuBot charges its battery using solar power during the day and operates at night. Using a stored map of the area, the mower follows a pre-programmed path, with machine learning making corrections as needed.

Clients can track their RenuBots using Renu Robotics’ fleet management software. Because each RenuBot unit is connected via the internet to the software platform, solar farm operators can track vehicle performance.

So far, Renu has raised almost $74,000 from 219 investors in its MircoVentures crowdfunding campaign. The co-founders are looking to raise over $1 million for hiring, manufacturing, R&D, and marketing. Renu previously raised $578,000 in pre-seed funding from angel and private investors.

In December 2019, the company shipped its first RenuBot mower units to a major solar energy provider in Virginia and was accepted into Capital Factory’s VIP Accelerator. With 16 nondisclosure agreements in place and seven letters of interest with solar energy providers, the company has plans to develop additional robots that can spray pesticides, as well as clean, inspect, and secure solar panels.

Longer-term, the co-founders look to launch its robotic mowers at other locations such as airports, and around pipelines and power lines.

“The need is huge, so the opportunity is way beyond making mowers for the agricultural industry,” Matus said.