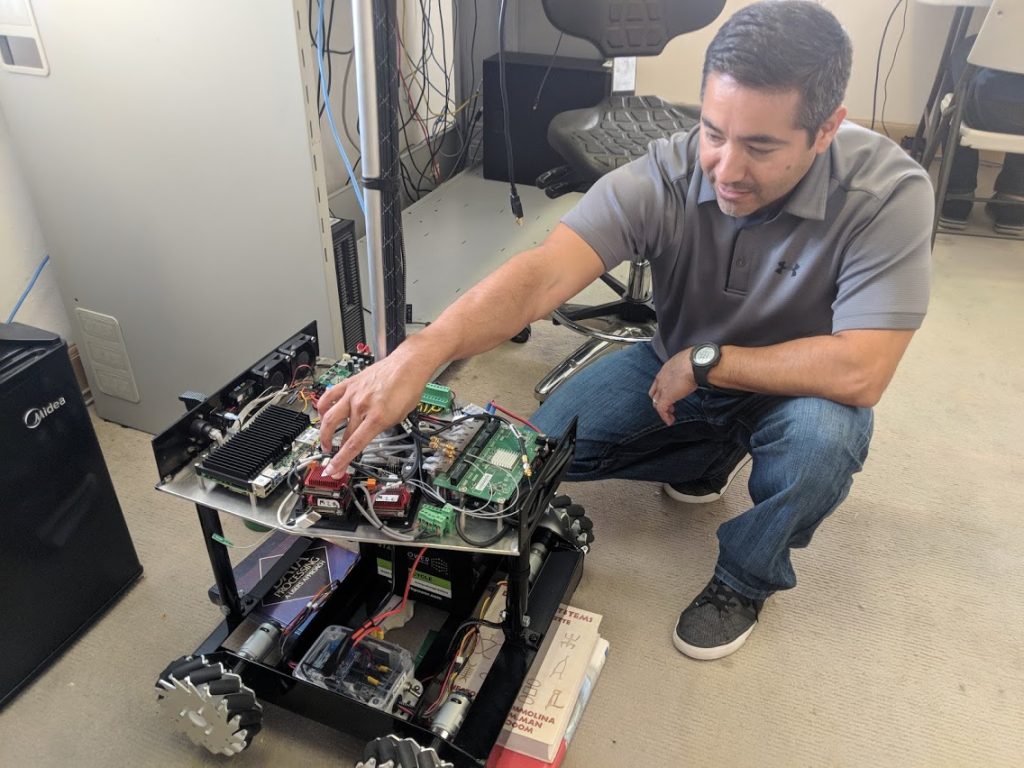 Reckon Point is one of the startups participating in CivTechSA, a joint program between the Geekdom co-working community and the City of San Antonio. The program matches startups with city departments to develop solutions requested by municipal leaders. The startup developed the wayfinding app for the San Antonio International Airport over the course of the program’s first four-month cohort, which ended in late July.

The public may register to attend the demonstration day to see the work done by CivTechSA participants Reckon Point and Kinetech. RSVP for the Aug. 29 Demo Day here.

The Geekdom-based startup specializes in indoor GPS mapping and way-finding services. San Antonio native and founder Gabe Garza has engineered a robot for indoor navigation that uses the earth’s field of electromagnetic signals to recreate an accurate layout of interior spaces. Since launching in early 2015, the startup has added computer vision which enables the robot to “see” and navigate itself while tagging and identifying different objects. The robot integrates the visual input with data from other camera systems and LIDAR, a remote detection system that works on the principle of radar, but uses light from a laser.

Detailed indoor mapping is not widespread because common navigation tools such as Google Maps rely on GPS data from satellites to determine a user’s location. Once a user is inside a building, Google Maps does not work well because GPS signals cannot penetrate the structure. Most spaces also have not had their interiors mapped precisely.

The airport’s goal was to develop a wayfinding app that would assist passengers as they move from the TSA exit to the baggage claim, then outside to short-term parking, ground transportation, or the car rental facility. The Reckon Point app will uses signals from smartphones paired with the Earth’s magnetic fields to track mobile phone app users to within 1 meter of their location. Indoor GPS mapping competitors such as Jibestream and Steerpath average an accuracy of about 5 meters and may not deliver a full end-to-end platform system.

“The market potential for this wayfinding platform is big, since sports stadiums, industrial spaces, or architectural firms working on large-scale renovations can all use indoor GPS mapping,” said Alex Gomez, founder and CEO of Code2Revenue and chief revenue officer for Reckon Point.

Reckon Point has mapped the airport’s terminal B and created a searchable interactive map to guide passengers to baggage claim and beyond, adding the exact location for about 300 points of interest down to power plugs, changing stations, breastfeeding rooms, and bathrooms, Garza said.

“The app even tells you where you stand outside exactly for an Uber pickup, the hotel, and parking shuttles, or curbside pickup,” Garza said.

The public-facing portion of the application may help travelers, but the platform can also support airport tenants—such as FedEx, concession owners, and airlines—in tracking staff and assets. Businesses could access the platform’s backend to know in real time the location of their employees or equipment like wheelchairs, Garza said.

“Location-based advertising could help generate revenue for the airport that could go toward paying for the system,” Garza added. “It’s a revenue-generating system concept we pitched to the city that is self-sustaining if they choose to adopt it.”

Reckon Point gave a private app demonstration to the airport July 27. The City of San Antonio and the San Antonio International Airport will evaluate the finished phase 1 product as they decide on the next steps. Reckon Point has mapped about 60,000 square feet of the airport or only 15 percent of the total space.

Syed Mehdi, the airport’s chief strategy and development officer, explained how the CivTechSA program provided the airport the opportunity to solicit the startup community for an innovative technological solution. The airport was interested in integrating its existing tools and resources into one platform, Mehdi said. What Reckon Point proposed was the addition of their navigation solution to tie everything together.

“They have made good progress, and we are looking forward to seeing the final finished product,” Mehdi said. “They have enhanced the app a couple of notches above from what we saw at our last meeting.”

Developing a fully functional platform for an airport in a major U.S. city is an achievement for any company, especially one with only eight employees. Finding engineering-skilled employees for the startup’s growth has been a challenge, Garza admitted. The company has been working to recruit talent directly from UTSA’s engineering school and from St. Mary’s programs to build their talent and scale the company.

“We saw the airport challenge as a great opportunity to develop a world-class wayfinding platform,” Garza said. “We focused on pushing the envelope to make robot-mapping smarter, faster, with even more precision. We know if we do this right it will help us succeed, as we have developed a fully functional platform for an airport in a major U.S. city.”