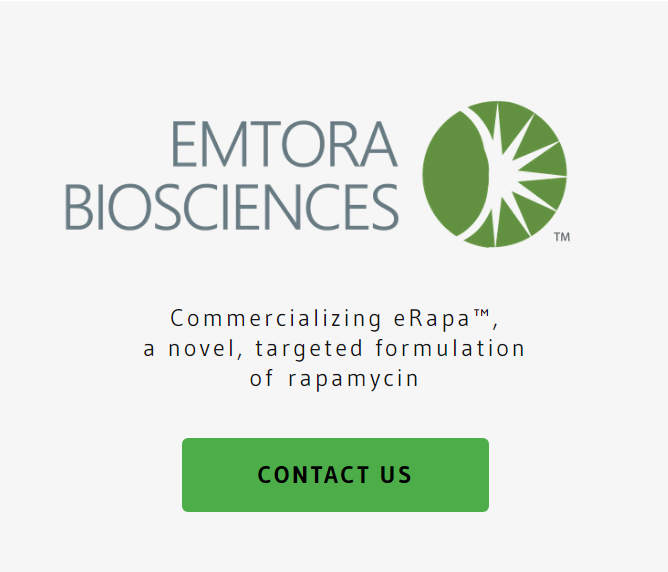 San Antonio-based Rapamycin Holdings, Inc. announced its rebranding Tuesday as Emtora Biosciences with Dr. Carole Spangler Vaughn as its new chief executive officer. Dan Hargrove recruited Spangler Vaughn as his replacement after hiring her as a consultant for the privately-held drug development company about six months ago.

The drug company is commercializing a ground-breaking cancer prevention drug, eRapa™, a proprietary reformulation of the generic drug Rapamycin. The changes reflect the company’s goal to get the drug through the regulatory approval process faster for a quicker market launch.

“I’ve brought drugs to the market before,” Spangler Vaughn told Startups San Antonio. “With my background and experience, I can ask detailed questions about the science, then ask about the drug’s value proposition for the marketplace.”

Spangler Vaughn has a Ph.D. in biophysics from The Johns Hopkins University and an MBA from the University of Washington. She has worked both in the laboratory and in business development, including at Bristol-Myers Squibb, the University of Washington’s Office of Technology Transfer, Dendreon Corporation, and Clario Medical Imaging.  She also owned and operated the Hawaii State franchise for MediVetBiologics, an animal health regenerative medicine company and has over 25 years of experience in the life science sector.

She lives in Houston and plans to commute to San Antonio regularly.

Dr. Randy Goldsmith founded the company in 2012 to commercialize eRapa for treatment of age-related illnesses such as Alzheimer’s disease and people genetically at risk of certain cancers. The company developed eRapa as a platform drug that can treat multiple diseases, with dozens of studies proving eRapa’s positive impact on multiple types of cancers, auto-immune diseases, cognition, and other diseases associated with aging.

“For biomedical companies that come out of research organizations and universities, the founders are typically not the ones who cross the finish line,” Spangler Vaughn said.

“Carole’s capabilities are perfectly matched to the highly focused milestones that will come next for Emtora,” commented Hargrove. “Her deep experience in the life science sector, particularly in commercializing new technology, will be a remarkable asset to the company.”

The company recently closed on a $2 million convertible note that positions the company for a larger Series B funding round as it gets the drug closer to market. Spangler Vaughn anticipates the clinical trial, which should be completed by mid-2019, will yield safety and drug dosing data.

“We postulate that eRapa’s microencapsulated formulation means it can be as effective at lower doses with fewer side effects,” Spangler Vaughn.

The company’s patented microencapsulated coating for rapamycin means the drug can pass through the stomach before being released in a controlled manner at lower levels.

The new company name Emtora Biosciences captures how the eRapa compound works by preventing cancerous cells from multiplying. The drug targets a kind of signaling molecule for cells called mTOR or mammalian target of rapamycin to prevent cancer cells from growing into larger, malignant tumors.

“Our biological mechanism of action is the mTOR inhibitor, so we put an “e” in front, and added an “a” for our new name Emtora,” Spangler Vaughn said. “I’m excited to be on the front lines to watch biotech research in Texas take off and become a booming industry.”