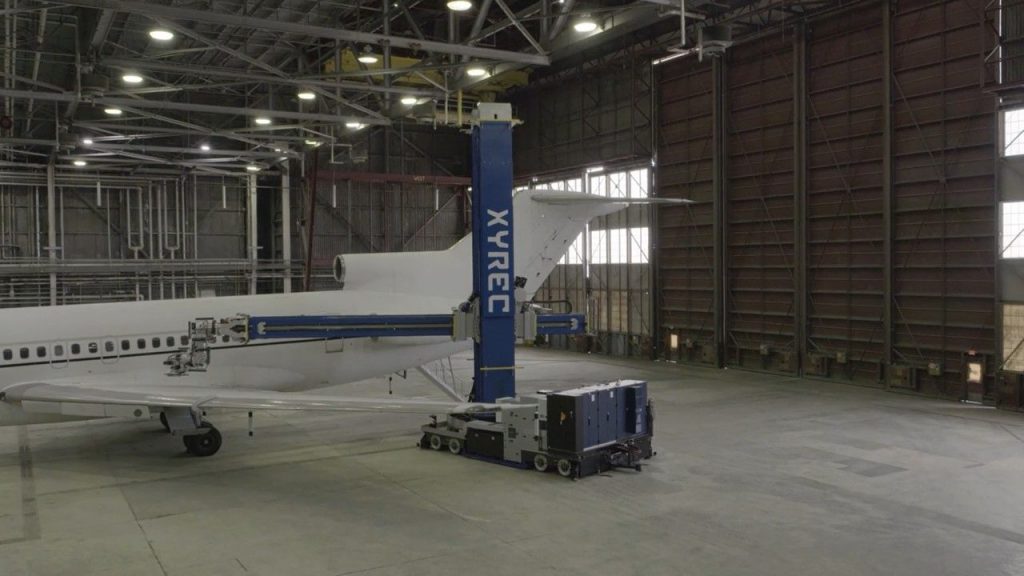 XYREC has won a prestigious award for its ground-breaking laser coating removal robot, a 72-foot-tall robotics system that uses a 20-kilowatt laser to remove paint from aircraft and other large pieces of equipment.

The American Council for Technology and Industry Advisory Council (ACT-IAC) announced the 13 winners of its 2021 Innovation Award earlier in May. ACT-IAC is a non-profit public-private partnership dedicated to improving government through the application of information technology, providing a forum for government and industry to collaborate on critical technology issues in the public sector.

A panel of judges selected the 13 award winners from 169 nominations. The 13 companies include global industry leaders such as MITRE and Oracle and highlight technological advances in artificial intelligence, pandemic response tools, cybersecurity, IT modernization, robotics, geospatial analysis, and more.

XYREC and the other award winners presented their innovations during the Emerging Technology and Innovation Conference this week. In 2020, R&D World Magazine recognized XYREC’s new robotic technology as one of the top innovations of 2020 in the Mechanical / Materials category.

XYREC operates out of a custom-built 7,000-square-foot facility on Port San Antonio’s campus. The world’s largest industrial robot results from a collaboration between the Southwest Research Institute and the Netherlands-based XYREC.

The robotic system can be repositioned to aim its high-powered laser to rapidly strip paint from any size aircraft without damaging the airframe. The automated de-coating of the plane is precise down to the micron level and can stop before removing a specified layer of paint or coating.

The global fleet of over 125,000 aircraft must be repainted regularly for aerodynamic efficiency, prevent corrosion, and are often repainted with new branding once sold to a new operator. Traditional paint removal involves soaking the airframe with solvents, followed by hands-on scrubbing to remove the last traces.

XYREC’s technology immediately vacuums paint particles into a container (typically, about two pounds of powder) as the laser moves over the surface of the aircraft. Traditional methods for the same aircraft would require approximately 475 gallons of harsh chemicals and 3,700 gallons of water to remove the plane’s paint.

XYREC’s technology significantly reduces costs and turnaround time and eliminates the need for storing, handling, and disposing of harsh chemicals. Using XYREC’s robot can help operators and maintenance shops reduce overhead costs and return passenger, cargo, and military aircraft into service sooner, reducing turnaround time by up to 60 percent, according to the company’s announcement.

“The system delivers flexibility: it works for every aircraft, it can remove any paint very fast, and it can operate in different hangars. The road to get there has been long and winding. To our knowledge, nowhere in the world is such an innovative robot operating or built,” XYREC CEO Peter Boeijink said in October.

Boeijink resolved to develop a more efficient and cleaner alternative for stripping airplanes safely and quickly after a 2008 visit to Hill Air Force Base in Ogden, Utah.

“F-16 fighter jets were paint stripped by a media blasting robot inside costly specialized hangars,” Boeijink said. “This system was even a large improvement compared to the daily operations of stripping aircraft by applying chemicals and manual sanding. The old way is expensive, slow, bad for health by poisoning gas and chrome-VI, and very unfriendly for the environment.”

The application of robotic technology to industrial problems is a growing core competency at Port San Antonio, CEO Jim Pershbach said. XYREC is “solving an immediate challenge in aircraft sustainment that is tremendously expensive and time-consuming with technology.”

Other Port companies are using advanced robotics to solve different industry problems, a momentum that is garnering attention worldwide.

Robotics startup Reckon Point specializes in indoor GPS mapping and navigation services. Their robots use the earth’s field of electromagnetic signals to navigate and recreate an accurate layout of interior spaces on their own without human supervision. The addition of computer vision gives the mapping robot the ability to “see” and navigate itself while tagging and identifying different objects.

The startup was recognized by Aviation Week as one of eight companies worldwide that could potentially transform the aerospace industry. According to a MarketWatch Report, detailed indoor mapping is an emerging market with an expected growth rate of 30 percent by 2022.

“Our wayfinding platform can use its indoor GPS mapping to map maintenance operations and materials on the assembly line and even track assets and staff when paired with sensors, wearable devices, or mobile phones,” Garza said.

Pershbach pointed out how robots typically “require a ton of human interaction. Yet Reckon Point’s can map an environment with the robot without the level of human supervision one typically expects. You can take advantage of what robots can do and send them into a potentially dangerous or remote environment where using a robot is much better and faster than sending in humans.”

Now, add in Plus One Robotics, the world’s leading provider of vision software for logistics robots. Their explosive growth since 2016 is driving the company to expand operations globally using its $33 million Series B funding announced in April. Companies worldwide are looking to leverage advanced technologies that are Plus One’s specialty, innovative solutions that combine IoT, AI, robotics, camera vision, and 5G technology.

Plus One’s software trains three-dimensional camera-equipped robots with machine learning to teach them how to see and pick up items on an assembly line. Their three-dimensional and artificial intelligence or AI-powered vision software gives the internet-connected industrial robots the ability to automate a variety of warehouse tasks.

“When we first met the Plus One founders, they had an idea that they’ve grown into a global company,” Pershbach said. “All three companies are tackling some pretty big challenges with technology.”

These Port tenants are changing how robots solve thorny problems in multiple industry sectors. With the projected opening of the Port’s Innovation Center in spring 2022, it is only a matter of time before visitors can come to the Port campus to “see and interact with the applications and technologies getting developed here,” Pershbach said.

The featured image is of the XYREC robot stripping the paint off an airplane at its facility at Port San Antonio, courtesy photo.