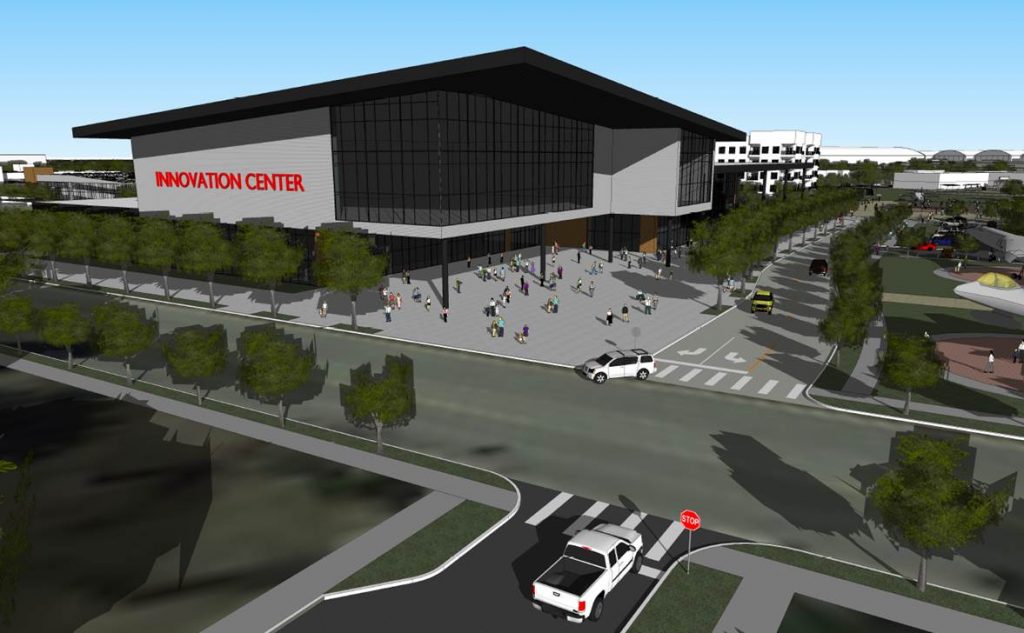 Jim Perschbach, who earlier this week was named president and CEO of Port San Antonio, announced a bold strategic vision Friday at an event organized by the San Antonio Chamber of Commerce. The Port plans to transform the 1,900-acre campus southwest of downtown into a center for advanced technology, complete with an innovation center that will house the San Antonio Museum of Science and Technology (SAMSAT).

Plans are in the conceptual stage to construct a new, 50,000-square-foot facility at Port San Antonio with a showroom for locally developed innovations, in addition to the science and tech museum and a maker space. The concept is in initial stages of development with final concept and projected costs to be announced in the coming weeks, according to a Port spokesperson.

The Port has been supporting the growth of science, technology, engineering, and mathematics (STEM) education, training, and strategic partnerships on its campus, especially since SAMSAT’s 2017 relocation to 102 Mabry Drive. In recent months, strategic partners have moved their headquarters to Port San Antonio and are now housed at SAMSAT, ones such as the San Antonio/Bexar Country STEM/STEAM Learning Ecosystem Initiative, the Cyber Texas Foundation, and SASTEMIC.

SAMSAT’s founder David Monroe, who holds patents in many foundational technologies, has collected artifacts over the past 40 years from the history of technological innovation starting with electricity to the invention of the first desktop computer at San Antonio tech company Datapoint, and beyond to first-generation GPS and current-day cybersecurity equipment. The collection on view at the museum’s Mabry preview center represents only a small portion of Monroe’s total inventory, which is housed in a separate warehouse at the Port, Monroe said.

Monroe’s vision has been to create SAMSAT as an innovation center, using the comprehensive collection to inspire museum visitors to learn about science and technology, then allow them to use the museum’s co-located maker space to learn on-site how to create and invent. Monroe has added to his considerable inventory of large-scale equipment over the years with more recent acquisitions to outfit the future maker space in the museum.

“When I invented something, I needed to produce a working prototype, so I used specialized equipment to do just that,” Monroe said. “Inventors need to know how to create something new that works, not just concepts on paper.”

The initial concept had been to retrofit an empty Port building that Chromalloy used previously to service gas turbine engines for commercial and military aircraft into a new home for SAMSAT’s entire museum collection, maker spaces, and specialized e-sports arena that could be used for hosting large-scale Cyber Patriot events and robotics competitions. That plan is being revised, as industry partners have shown interest in relocating to a center at Port San Antonio that would include businesses interested in innovation housed side by side with inventors inspired by and working in SAMSAT’s spaces.

“Building a new innovation center may be more cost-effective than retrofitting the former Chromalloy building,” Perschbach said. “We’re looking at the options now to see if it [the new innovation center] would be a new building or housed in a retrofitted one. We’re also looking at whether it would house only SAMSAT or would include industry partners.”

Perschbach stressed the need to connect the people working on tech solutions to the industries that need them. The vision for Port San Antonio is to become the epicenter for innovators working on industrial systems—testing apps, inventions, and new products in an innovation center that would facilitate collaboration between technology and industry partners.

Monroe’s goal of inspiring innovators to work alongside industry partners aligns well with the Port’s overarching strategic vision to become more of a Tech Port where a workforce with valuable skills can continue to grow. The innovation center would provide the venue for Port San Antonio to support educational efforts through SAMSAT and its STEM education partners as well as showcase new technologies being developed at the Port and throughout the community.

As Perschbach showed a series of Port San Antonio maps that showed tenants working in STEM education and workforce training, cybersecurity, defense, aerospace and aviation, advanced manufacturing, and logistics, he emphasized how these are connected increasingly to major players in the region’s mature industries.