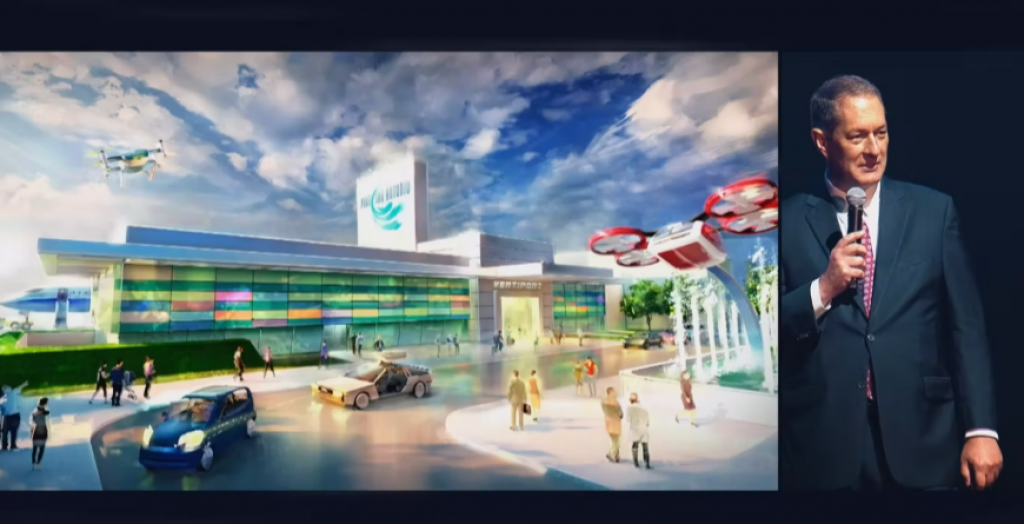 Electric vertical take-off and landing or eVTOL vehicles could be the next frontier in urban transportation. That’s the bet Port San Antonio is making in building a new aviation center for eVTOL vehicles on its expansive campus.

Since San Antonio’s Kelly Air Force base closed in 2001, Bexar County’s largest commercial real estate property has been steadily redeveloped into an innovation hub. Port San Antonio is now slated to be the home of one of the first vertiport facilities in the U.S., Port CEO Jim Perschbach revealed earlier this year.

“It’s our attempt to expand the business case of this technology,” Perschbach said. “If you wait for someone to build the vertiport, you will never create the environment to sustain this transportation mode.”

Perschbach said Port San Antonio has already received funding from the U.S. Federal Aviation Administration (FAA) to further its work on an eVTOL plan. He added that the Port would begin this summer to engage architects, engineers, and other professionals to refine the scope and design of the facilities, which will start breaking ground in 2023.

The vertiport will be built on SW 36th Street close to the intersection of Billy Mitchell Blvd & SW 36th St. Perschbach expects there will be a landing pad at the Port’s 130,000 square-foot technology showplace called Tech Port, with other landing pads closer to office buildings and some precision delivery sites near the Port’s busy industrial airport at Kelly Field. The Port’s CEO expects the construction to take about 24 months at an estimated cost of $50 million.

Here’s why Port San Antonio is building a vertiport.

Advanced air mobility will be the next disruption in aviation.

Whether it’s delivering goods in urban environments, linking rural areas to population centers via passenger and cargo mobility, or offering an entirely new passenger travel method across a city and its surrounding areas, emerging capabilities in advanced air mobility can make these flights a part of daily life. Hence, affordable advanced air mobility options like eVOTLs could have multiple commercial, civil, and defense applications.

Deloitte’s 2021 Advanced Air Mobility report and the Aerospace Industries Association published a study that projects the work required to build these new aircraft, deploy the infrastructure to enable their operation, and provide their services and maintenance could create more than 280,000 jobs in the U.S. alone by 2035.

Yes, eVTOL technology is still in its early stages. However, the global eVTOL aircraft market, estimated at $8.5 billion in 2021, is projected to reach $30.8 billion by 2030, according to this eVTOL market analysis.

“We’re creating the vertiport on aviation land, complete with multiple landing sites, to prove that you can move people safely and efficiently,” Perschbach said. “If you can test this safely, you can scale it out. Over time, you build a safe, sustainable transportation network.

“Building the vertiport will help force that innovation,” he said.

eVTOL startups will need testing grounds to validate their technologies. The Port’s vertiport will attract these advanced technology companies to San Antonio for testing and development.

The U.S. government is interested in eVOTL as an emerging class of aircraft, given how useful it can be in missions such as disaster relief, firefighting, search and rescue, humanitarian aid efforts, medical evacuation, logistics support, and transporting personnel.

In 2020 the U.S. Department of Energy announced $33 million in funding for carbon-neutral electric aviation. In the same year, the U.S. Air Force launched its Agility Prime project to accelerate the development of the commercial eVTOL aircraft industry. Over the past two years, Agility Prime has awarded over 250 contracts for research and development along with four airworthiness certifications.

The FAA is working to identify infrastructure design needs for these aircraft and expects to develop a new vertiport standard in the coming years. The FAA issued draft interim guidance in March 2022 as an initial step in supporting the design and operation of eVTOLs, with preliminary FAA certifications coming over the next year or two.

Having a living laboratory to test and develop regulatory guidelines for this new class of eVOTL aircraft can help accelerate the process, Perschbach explained.

“We’re planning on running this [vertiport] as a private facility on the Port,” he said. “We’ll prove there’s a case for this type of transport hub.”

Perschbach expects the U.S. military and civilian operators working at East Kelly will develop military and commercial use cases for eVTOLs as a source of precision lift and placement of loads and people in industrial settings, remote environments, and other essential missions.

If you build it, they will come.

Port San Antonio is building the vertiport, confident that customers will come to use it. The Port has taken the proactive approach before, with its specialized secure processing facility Project Tech Building 1 in 2018 and follow-on Project Tech Building 2 in 2021. Port San Antonio built both facilities on speculation, and the dedicated facilities for cybersecurity and other security operations are now fully leased.

Several vertiport projects designed for eVTOL have been announced across the U.S. The Port’s project will help place it at the forefront of urban mobility innovation.

“We now have relationships with four different eVTOL manufacturers,” Perschbach said. “There are so few places in the world doing this. Building a vertiport gives us a competitive advantage.”

The featured image is of Port San Antonio CEO Jim Perschbach announcing plans to build a vertiport at a Port event in June 2022, courtesy image.