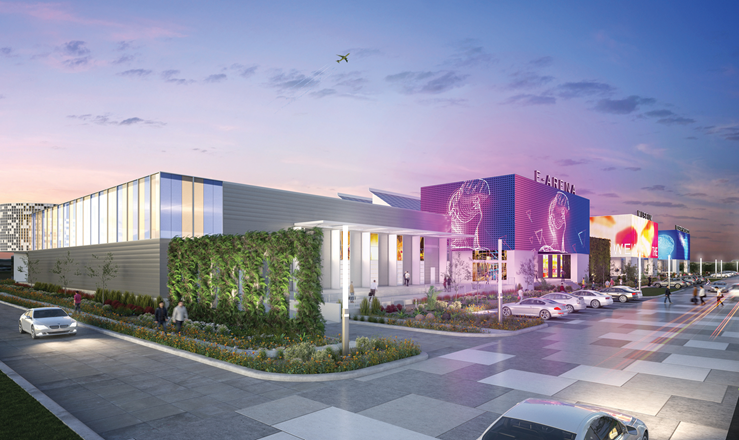 Plans for an ambitious innovation campus at Port San Antonio have gotten one step closer to realization.

American Triple I Partners is an infrastructure private equity firm that focuses on transportation, information technology, and smart city investments.

The same partners will also work on the concept development for a second facility as part of the Port’s Project Tech complex. The new building will add state-of-the art office space to house sensitive defense and private-sector cybersecurity and other advanced technology companies that require secure spaces to support military operations and commercial clients.

“All members of our consortium will work closely with Port staff and leadership to agree on the design, build, financial structure, and specialty operators needed to complete this,” David Cibrian, CEO of American Triple I Partners told Startups San Antonio.

Over the next four months, the Port and Triple I will focus on additional design and feasibility studies that could lead to formalized separate agreements for phased construction of the two projects, according to Port officials. Part of this process will include developing detailed cost estimates for the concept and design and identifying funding sources.

Triple I will contribute money as equity for the project with plans on using a Dallas-based debt provider to fund the complete project. The cost for both Project Tech 2 and the innovation center’s Phase 1 could exceed $60 million, Cibrain said.

Should the Port decide to proceed with construction, that would constitute a new development agreement.

“As we advance these development plans in the months ahead, we look forward to creating new and exciting places where our people’s talent can be further showcased and connected with a world of big opportunities,” stated Port Board Chair Chris Alderete.

The proposed innovation center would provide an integrated campus of specialized spaces to house innovators from San Antonio’s community, as well as science, technology, engineering, and mathematics (STEM) educators and technology employers. The industry showroom, prototyping facilities, and innovators co-working spaces will help them demonstrate new technologies that could be commercialized for the marketplace.

The new center would open in the Port’s existing “flex space” or industrial warehouse on the northeast corner of Billy Mitchell Boulevard and 36th Street. The 130,000- square-foot industrial facility can be expanded to approximately 200,000 square feet to accommodate an industry showroom and STEM education center, collaborative co-working spaces, and a maker space for prototyping.

The Port is leveraging its existing structures to refine its vision of connecting the capabilities across their entire campus to innovators throughout San Antonio, the state of Texas, and globally, Port San Antonio president and chief executive officer Jim Perschbach said.

Cibrain has been working on Triple I Partners’ proposal for months and said they have already identified a local e-gaming operator company run by recent University of Texas at San Antonio graduates.

“We’ll use national and local experts for the specialized maker space, as well as for robotics and e-gaming,” Cibrain said.

The second project includes planning for a new technology office building elsewhere on the Port’s campus that could be potentially larger than the Port’s Project Tech complex completed in mid-2018, according to Port officials. The first 90,000-square-foot building includes custom-equipped secure spaces for the growing number of cybersecurity firms moving onto the Port campus to support the 24th Air Force  and Cyber Command headquarters, as well as other military cybersecurity and intelligence operations in the region.

“We’ll be working very closely with Port leadership to make this happen,” Cibrain said. “The tenants have been clear—they have told the Port they want this innovation center.”

Featured image is of the industrial warehouse on the northeast corner of Billy Mitchell Boulevard and 36th Street that could be developed into the future home for SAMSAT, an e-arena, and an industry showroom as Phase 1 of the Port’s innovation campus. Renderings credit: Port San Antonio and Gonzalez | Mogas Architects.