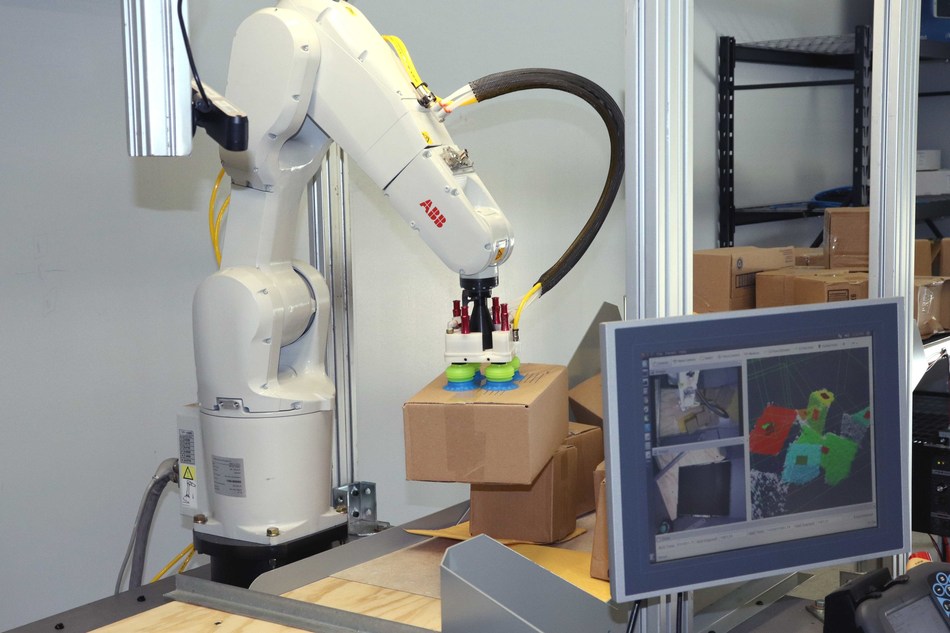 A San Antonio startup has raised $8.3 million in funding, according to a Securities and Exchange Commission (SEC) filing last week. The industry leader in robot perception technology, Plus One Robotics, Inc., received the investment from an undisclosed source.

“We did file the Form D with the SEC earlier this week, which only tells the world that we raised over $8 million,” Plus One Robotics chief executive officer (CEO) Erik Nieves said Friday afternoon. “What is important is the launch of our new technology and the partnerships it took to build it.”

Plus One Robotics has partnered with leaders in robot manufacturing, system integration, and e-commerce to develop the PickOne Perception system for the order fulfillment and parcel shipping sector. The startup launched the new system in May after a trial with an undisclosed customer and is leasing about 4,500 square feet of office and research laboratory space at Port San Antonio.

The PickOne system combines 2-D and 3-D computer vision systems with machine learning software to create a computer-guided picking system compatible with major robot brands. The system helps robots used in order fulfillment and parcel shipping markets to “see” items, pick them up, and package parcels. At up to 1500 movements or “picks” per hour, the software generates pick points faster than any other 3-D vision software currently available, enabling the robots using the system to meet or exceed human picking rates, Nieves said.

The computer vision system is coupled with artificial intelligence (AI)-enhanced software that can connect robots to one another in complex logistics and e-commerce automated robotic operations. The PickOne system can be installed on robots from any major robot manufacturer, including ABB, Fanuc, Kuka, Universal Robots, or Yaskawa, for use in different industries.

“What Plus One is doing is taking industrial robots that are ‘blind and stupid’ and applying sensor arrays and artificial intelligence to them,” Port San Antonio CEO Jim Perschbach said. “It’s going to change the world of logistics and manufacturing.”

The $8.3 million investment is in addition to Plus One Robotics’ initial investment round, which the startup announced May 23 for $2.4 million, according to CrunchBase. Schematic Ventures, a thought leader in supply chain automation, led the initial seed investment round with participation from Lerer Hippeau, ff Ventures, First Star, and Dynamo. The $8.3 million will significantly add to the amount of venture capital raised in San Antonio in the second quarter of 2018.

Besides Nieves, Plus One Robotics’s co-founders include former Southwest Research Institute engineers Shaun Edwards and Paul Hvass. In 2016, the co-founders launched Plus One with a vision to build a new kind of robot, but had little funding and no place to work. They met Dirk Elmendorf, co-founder of Rackspace and currently co-founder of Brokerage Engine, who offered workspace for the three men at his converted offices in the former H&H Coffee factory on the city’s East Side.

In those early days, “raising that kind of money was really hard to do,” Edwards said. “We couch surfed at their [Elmendorf’s] place when I had zero dollars and the three of us were not working.”

The three co-founders shared how fraught with tension it was for a startup to launch an innovative new applied technology that many different customers could leverage. Edwards and Nieves also described how investors pressured the co-founders to move the company away from San Antonio.

Today, Plus One Robotics has 11 employees and expects to add about 20 more within the year. Plus One is hiring junior and senior developers in robotics, AI, and computer vision.

“We’re one of a handful [of companies] that has raised this much [money],” Edwards said. “It’s pretty significant for San Antonio.”

Given that the startup has raised almost $11 million since the beginning of the year for its robotics technology, the funding reflects the potential of San Antonio’s innovation ecosystem.

“I have always been a proponent for and truly believe this is San Antonio’s sweet spot and that tangible technologies completely match San Antonio’s DNA,” serial entrepreneur and Geekdom co-founder Nick Longo said. “I hope others in the ecosystem can take a lesson from what Plus One Robotics is doing.”

All three men are actively involved in growing the local robotics community to encourage more residents to stay, learn, and eventually become employed by local robotics employers, such as Reckon Point. In fact, CEO Nieves is a San Antonio native who “had to leave for 20 years until I came back in 2005 when there were enough robots for me to work here,” Nieves added.

“What we’re doing is really more of an approach than a product,” Nieves said. “I am motivated for this to be a win for San Antonio.”

Featured image is of Plus One Robotics’ new hardware and software technology innovation for robots, the PickOne system. Photo credit: Startups San Antonio.