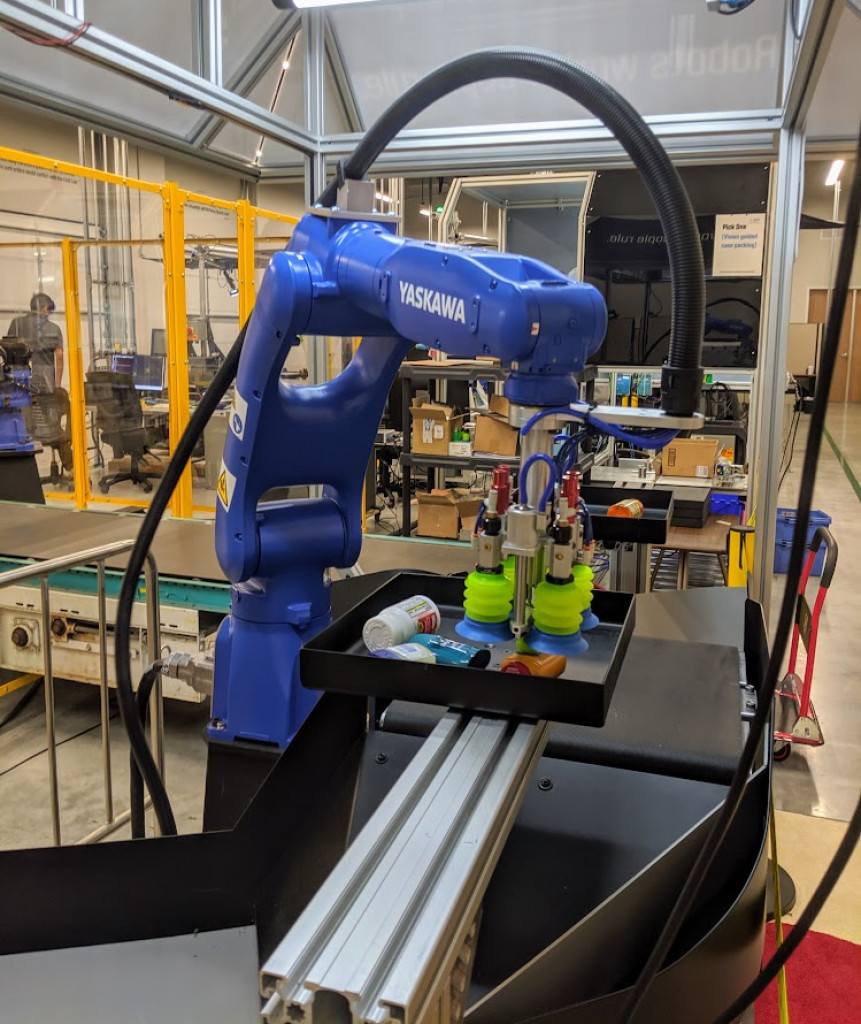 Plus One Robotics, a San Antonio-based leading provider of vision software for logistics robots, closed a $33 million Series B funding round Tuesday. The funding will support Plus One’s ongoing expansion in the U.S. and Europe and product development driven by the global boom in e-commerce.

McRock Capital, an industrial Internet of Things (IoT) fund and early-stage Silicon Valley venture capital firm TransLink Ventures, co-led the round. Existing investors joined automotive industry-focused BMW i Ventures and Kensington Capital Partners, along with innovation investors Perot Jain and Ironspring Ventures, to participate in the Series B round.

Whitney Rockley of McRock Capital and Toshi Otani of TransLink will join Plus One’s Board of Directors.

The fundraising started just before the holidays and kicked off in earnest in January, said CEO and co-founder Erik Nieves. “We had the term sheets by February and closed the funding round in April.”

The robotics startup developed software that trains three-dimensional camera-equipped robots using machine learning to teach them how to see and pick up items on an assembly line. Plus One’s three-dimensional and artificial intelligence or AI-powered vision software called Pick One works with any robot or gripper, which gives the internet-connected industrial robots the ability to deliver precise hand-eye coordination for a variety of warehouse tasks.

Yonder, Plus One’s supervisory software, allows human robot “supervisors” to teach robots how to handle atypical items moving from the dock to the door. One human acting as a robot crew chief can oversee 50 robots remotely, giving companies the ability to meet the round-the-clock consumer demands for goods.

Plus One Robotics has raised a total of $10.6M in funding over two rounds. Their latest funding was a 2018 Series A round for $8.3 million.

Fundraising for Plus One’s expansion into overseas markets during the pandemic was driven by demand for solutions to what Nieves calls “labor insecurity,” the phenomenon of having the least amount of labor available when it’s needed the most to keep the supply chain functioning.

“The pandemic, consumer surges, and stay-at-home orders for workers adds up to a huge labor insecurity problem for companies. How do I ship product if we have another outbreak?” Nieves said. “The need for resilience in the supply chain is what’s driving investors to move quickly in this space.”

“Our investors look like our customers,” Nieves said. “Our users are multinationals that have to solve their production issues globally. Our clients will be the ones who bring us into these markets overseas.”

One of those client-investors is BMW, a car manufacturer with more warehouses and warehouse employees in Europe than in North America.

“We believe that Plus One Robotics’ technology will usher in a new era of smart, adaptive robot systems to bring automation to new heights across supply chain, logistics, and manufacturing…This truly is the start of a new era of robotics-driven automation,” stated Kasper Sage, BMW i Ventures partner.

TransLink has partnership networks across the U.S. and Asia and invests heavily in the Korean startup ecosystem.

“With their precision and quality, Plus One is positioned to be an integral part of any system in e-commerce fulfillment and distribution center. We’re excited to play a part in this growth, as well as their growth in the Asian markets,” Toshi Otani of TransLink stated.

The funding will go toward accelerating the growth of Plus One’s depalletizing application designed for distribution centers looking to automate incoming pallets loaded with packages of mixed weights and sizes.

“Depalletizing happens everywhere,” Nieves said. “There are people whose job is to break them down and put the packages on conveyors, and there’s lots of churn in these roles, where your daily output is measured in tons.”

Nieves said the company’s investors recognize the potential of depalletizing technologies for automating the supply chain. “You cannot be the leader in vision-guided robots and only concentrate on the market in North America. With this investment, Plus One is poised for significant international growth.”

Founded in 2016, the robotics company has 44 employees. Since opening in October 2019 in an 11,000 square feet space at Port San Antonio, Plus One has expanded to 25,000 square feet within their facility. The company is hiring marketing, sales, operations, systems engineering, software developers, robot crew chiefs, and overseas-based system integration engineers and sales roles.

“We’re becoming a hub for B2B industrial-grade automated robotics solutions,” Nieves said. “It says a lot about the talent and capacity here for doing meaningful work.”

The featured image is of a Yaskawa robot picks up a package at Plus One Robotics. Photo credit: Startups San Antonio.