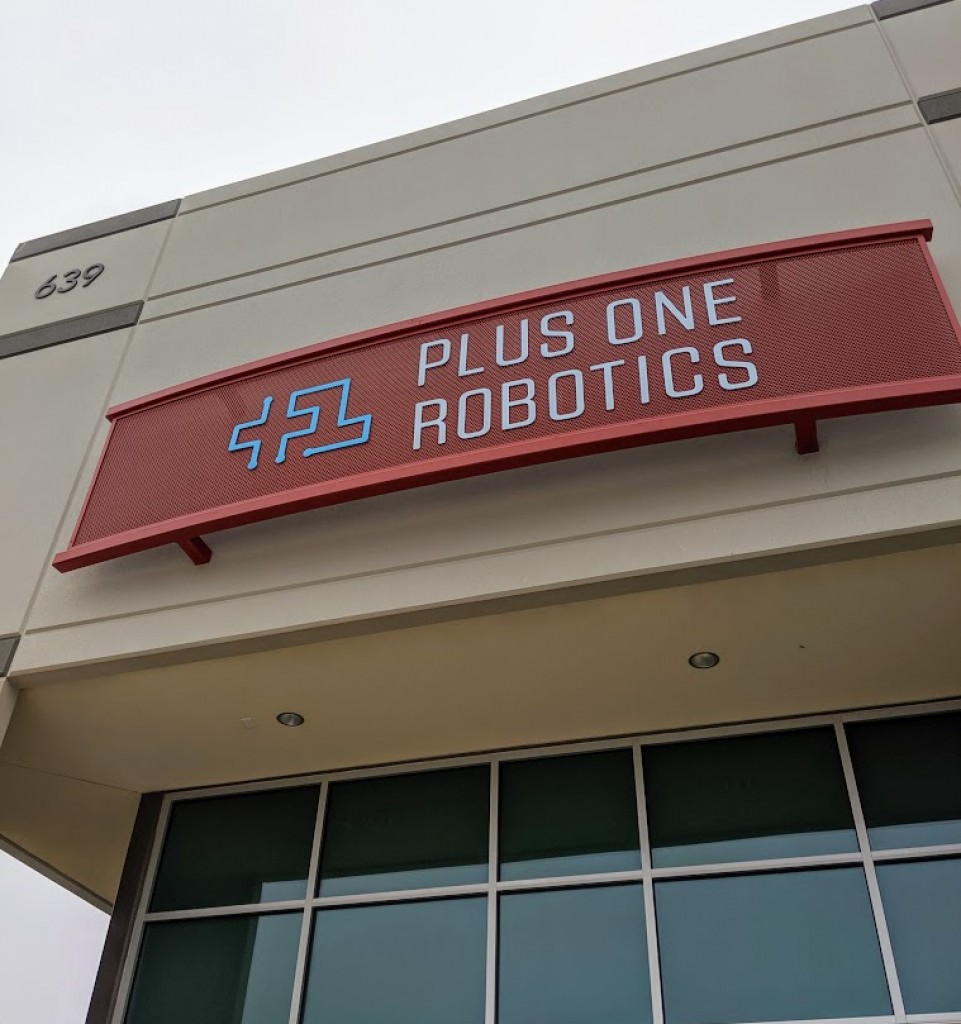 Despite the gloomy weather, onlookers eagerly lined up to tour the new Plus One Robotics facility at Port San Antonio Tuesday.

Co-founders Shaun Edwards, Paul Hvass, and Erik Nieves have combined several advanced technologies in order to automate warehouse operations for e-commerce companies. The robotics startup developed innovative software that trains three-dimensional camera-equipped robots using machine learning to teach them how to see and pick up items on an assembly line.

The advanced vision capabilities and high-performance manipulators are parts of the company’s PickOne system, an automated, mixed parcel sorting and picking (or singulation) system. The company also offers Yonder, a remote robot management service for enterprises, and CheckOne, an automated quality assurance system for parcel sorting.

Building a robotics company is not easy, requiring specialized knowledge, capital, lots of time to grow the business, and space for all the robots, Nieves admits. In 2016, the co-founders launched Plus One with a vision to build a new kind of robot but had little funding and no place to work.

They met Dirk Elmendorf, co-founder of Rackspace and currently co-founder of Brokerage Engine, who offered workspace for the three men at his converted offices in the former H&H Coffee factory on the city’s East Side.

The company then moved to the Port in 2017 and expanded from the handful of employees they first had, quickly outgrowing their first 4,500 square foot space at the Port in the process.

Plus One now has almost 30 employees housed in a 10,500 square feet facility at Port San Antonio that is located within a 100,000 square foot warehouse. When Plus One is ready to expand again, it will have the first rights to develop and move into some of the warehouse’s extra space when needed, Hvass said. The startup is looking to double its staff over the next year, hiring a mix of engineers and sales and support employees.

“This new space is a world-class robot facility,” Nieves told the people attending the company’s ribbon cutting. “We focus on connecting those robots to smart people.”

One of those newer employees is Zohair Naqvi, a systems integration engineer who joined Plus One two months ago from St. Paul, MN.

“I studied robotics and control systems in graduate school,” Naqvi said. “I couldn’t ask for a better job out of school – these are the same kinds of robots we worked on for school projects.”

Since becoming a robotics company, Plus One has attracted $11.5 million in venture capital – a $2.3 million initial funding round in May 2018 when Plus One launched its first commercial product and an $8.3 million Series A round last November.

“We’re one of a handful of companies that has raised this much money,” Edwards said. “It’s pretty significant for San Antonio.”

The company has developed a remote system for human operators called crew chiefs who help the robots when they get stuck. For example, when multiple items appear on the conveyor belt, and the robot cannot determine how to pick up the item it needs, the crew chief can control the robot remotely via a computer to keep the assembly line running smoothly. The company has one crew chief on its staff, but it expects to hire more as its customer list grows.

That crew chief is San Antonio native Grace Jimenez, who started at Plus One as a temporary worker.

As she worked intently at her desk, Jimenez sees what a robot picking packages from a conveyor belt sees while working in a remote warehouse location. Whenever the robot needed human intervention, Jimenez reached over to tag the item correctly for the robot to continue.

“I started with data tagging and loved the work,” Jimenez said. “I’m a gamer, so to me, they’re giving me a puzzle to solve.”

All three co-founders are actively involved in growing the local robotics community to encourage more residents to stay, learn, and eventually become employed by local robotics employers, such as Reckon Point.

“What Plus One is doing is taking industrial robots that are ‘blind and stupid’ and applying sensor arrays and artificial intelligence to them,” Port San Antonio CEO Jim Perschbach said. “It’s going to change the world of logistics and manufacturing. These capabilities are going to provide opportunities for our young people for the next 100 years.”

Featured image is the Plus One Robotics entrance to their new facility at Port San Antonio. Photo credit: Startups San Antonio.