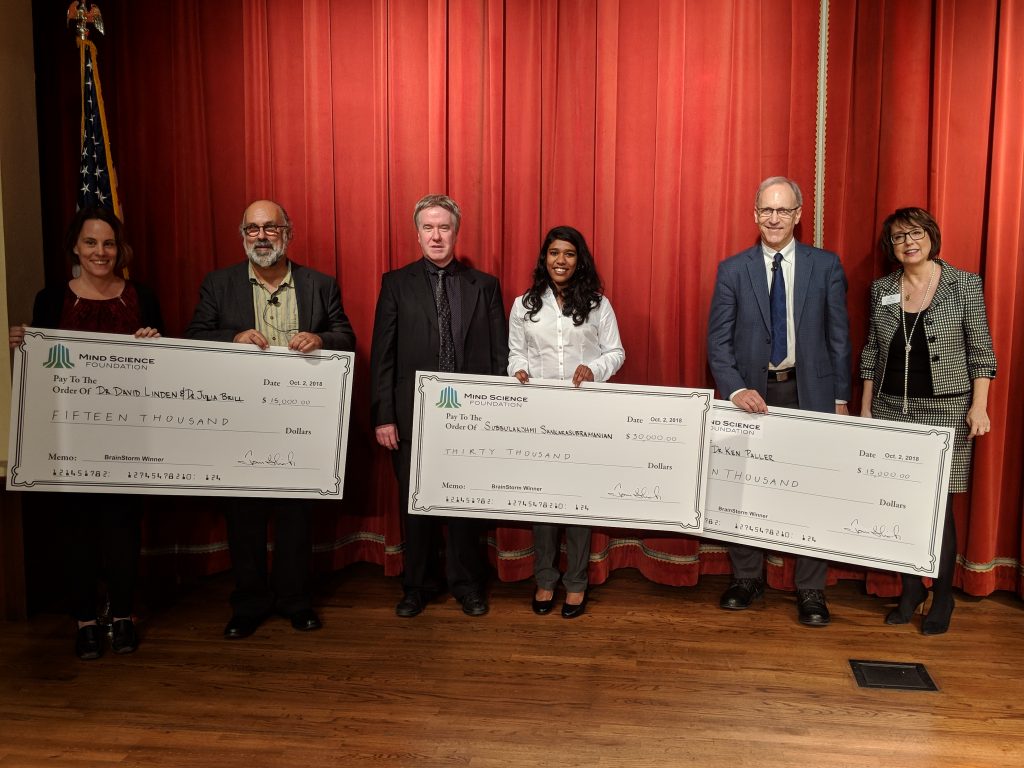 The Mind Science Foundation event at the Pearl Stable Tuesday evening was truly magical—a mixture of science and illusion fueled by how our brains can misperceive reality.

The Foundation’s BrainStorm connected neuroscience researchers directly to those funding their proposed groundbreaking research in a novel manner—in a pitch competition. After listening to three finalist team pitches, audience members voted for Dr. Michael Anderson and researcher Subbulakshmi Sankarasubramanian from the University of Cambridge. They received the top award of $30,000 for their proposed research on how the brain suppresses traumatic memories that cause emotional pain. Sankarasubramanian is a graduate student in the cognitive neuroscience research lab Anderson oversees at Cambridge.

Two finalist teams each won $15,000 for their research projects. Dr. David Linden and Dr. Julia Brill from the John Hopkins School of Medicine are interested in how extreme cold temperatures protect the brain in oxygen-deprived conditions like cold-water drownings or cardiac surgeries. Dr. Ken Paller and Karen Konkoly are working at Northwestern University on how to establish real-time, two-way communication with those having lucid dreams.

Anderson and Sankarasubramanian strive to pinpoint the region in the right frontal lobe region of the brain that acts as a “protective shield” in inhibiting unwanted thoughts, memories, and actions. Individuals with traumatic injuries to this region of the brain often experience difficulties in regulating consciousness of unwanted thoughts and feelings, making them vulnerable to depression and relived traumas. Anderson and Sankarasubramanian plan to confirm the region in the brain that is involved in pushing away unwanted memories and look for ways to enhance the shielding effect against painful thoughts.

“This process has been an eye-opening experience for me,” Sankarasubramanian said. “It motivated us to refine our research concept as we competed against the best of the best to get to the finalist stage of the Mind Science Foundation’s competition.”

Scientific grants rarely get funded without substantial preliminary data. Not only must there be proof of concept—enough research data should also be submitted to statistically demonstrate the likelihood of the project’s success. Awards like the $30,000 BrainStorm prize money can be pivotal in kick-starting early-stage research often used by scientists to develop a proof of concept to apply for more substantial grant funding. The added difficulty of communicating complex subjects in layman’s terms and pitching scientific research in a limited amount of time can be daunting for any researcher.

“Scientists need to be excellent communicators to get their science funded,” BioMed SA president Ann Stevens said. “They typically do not pitch their research, so this is an excellent opportunity for them to connect directly with those interested in funding their work.”

A scientist’s productive career and long-term research progress usually depends on sustained grant funding, Anderson explained. For a neuroscience graduate student with a promising research idea, the funding “valley of death” can be insurmountable.

“This award is critical for her [Sankarasubramanian’s] research and will contribute to her development as a scientist,” Anderson said.

BrainStorm’s interactive nature included the world-renowned illusionist Mark Mitton who emceed the event, displaying his magic skills to illustrate how we perceive reality and the ways our brains can deceive us.

The BrainStorm pitch competition is a pilot program, “an experiment to involve researchers, board members, and Foundation members in funding promising science,” said Meriam Good, Mind Science Foundation director. Good said they started with 12 applicants and narrowed the field down to the three finalists by judging scientists not only on the scientific merit of their research concept but also on their ability to communicate science effectively.

“We want to do this again next year,” Good said. “Getting funders excited about supporting science and mentoring scientists on how to pitch their innovative research is a win-win.”