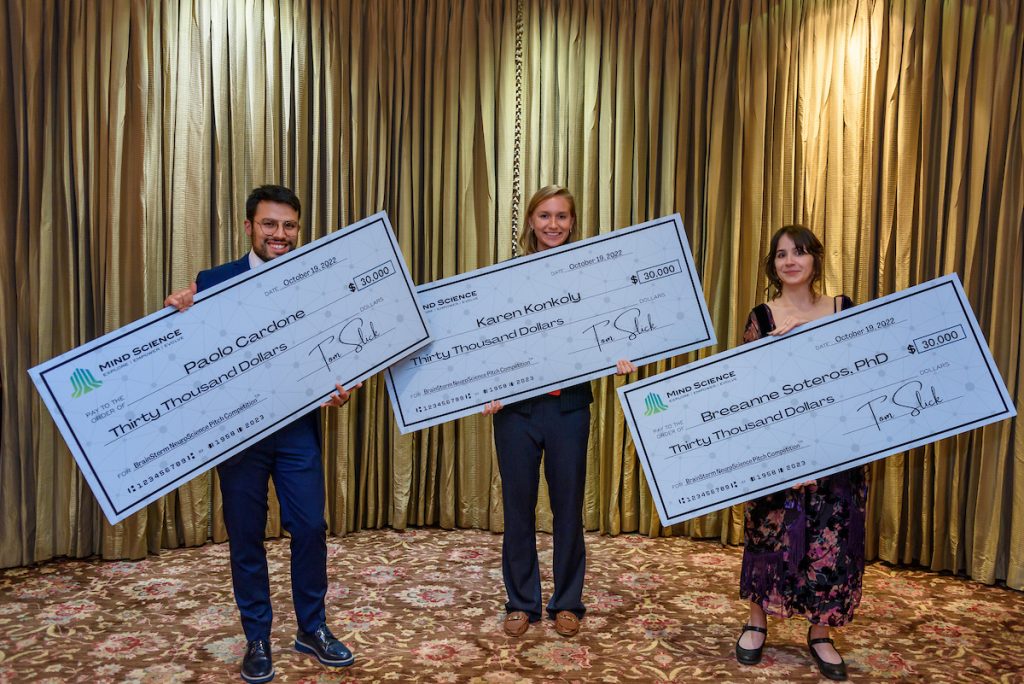 Launched in 2018, the BrainStorm Neuroscience Pitch Competition is designed for early‐career neuroscientists teamed with senior primary investigators. The equity-free funding helps support pilot studies so young researchers can demonstrate a proof of concept when applying for grants that can support further investigation.

Paolo Cardone, a neuroscientist studying consciousness at GIGA-Consciousness, the University of Liege in Belgium, is researching how psychedelics like psilocybin and ketamine can help post-coma patients with consciousness disorders. His video pitch also won an additional $10,000 “fan favorite” cash prize in addition to the $30,000 Mind Science award that the top three neuroscientists received.

Cardone plans to use the prize funding to best help patients struggling with consciousness disorders. He explained in his pitch video how our brains show more complexity when active than when a person is asleep or in a coma. However, patients who suffer from consciousness disorders after a severe brain injury may show signs of wakefulness (opening their eyes, for example) but have low brain complexity. These patients in a vegetative or minimally conscious state may survive a coma only to show no or little signs of consciousness, unable to respond to a simple request like ‘squeeze my hand.’

“We don’t currently have any cure,” Cardone said. “This condition can last for a lifetime, sometimes leading to devastating end-of-life decisions.”

Karen Konkoly is studying how we can dream on demand at Northwestern University. She strives to develop methods to trigger someone to dream specific content on demand. Researching workable methods will allow neuroscientists to harness the benefits of dreaming while avoiding the dysfunctional dreams that characterize many psychological disorders.

“We aim to provide the first demonstration of real-time experimentally controlled dream content and explore how that may inform us on the functions of dreaming,” Konkoly said. “The practical applications of curated dream content are far-ranging as well — imagine being able to dial up the dream you wish to have tonight.”

Breeanne Soteros, a researcher at the University of Texas Health San Antonio, is looking for ways to protect the brain during extended social isolation. Prolonged isolation can disrupt our ability to think and impair our memory — as many experienced firsthand during the COVID-19 lockdowns. Since social interaction is not always possible, Soteros plans to study how the brain trims synapses — the connections between neurons — during times of extended isolation.

The brain prunes excess synapses as it matures to help make neural processing more efficient, a necessary process as we become adults. When removal goes into overdrive, excessive pruning can destroy too brain connections, driving the onset of diseases like Alzheimer’s and schizophrenia.

“The answer might not be to take a supplement but rather to make sure that we’re still finding meaningful ways to connect with other people,” Soteros said.

Mind Science advisors mentored the three BrainStorm finalists on communicating complex, groundbreaking neuroscience ideas in their video pitches. Mind Science supporters and the general public watched the three online pitches, then voted to select who would win the fan favorite award of $10,000.

For example, BrainStorm 2021 winner Ben Rein studies how early experiences shape the social development of our brains at Stanford University. Mind Science funded Rein’s symposia for this year’s Society for Neuroscience annual meeting, which will take place in November.

“We are funding valuable research that will bolster our understanding of the brain,” Good said. “We also are investing in the careers of early-stage neuroscientists interested in exploring the frontiers of consciousness.

According to Good, Mind Science has doubled the amount of funding for BrainStorm this year, with the top three researchers collectively winning $100,000. In the first four years of the neuroscience pitch competition, prizes for the researchers totaled $50,000.

Over the past five years of the BrainStorm pitch competition, Mind Science has funded 16 scientists with a total of $235,000.

“Our strategic focus is clear,” Good said. “We’re investing in the future of brain research and the impactful studies of our generation’s most promising young scientists.”