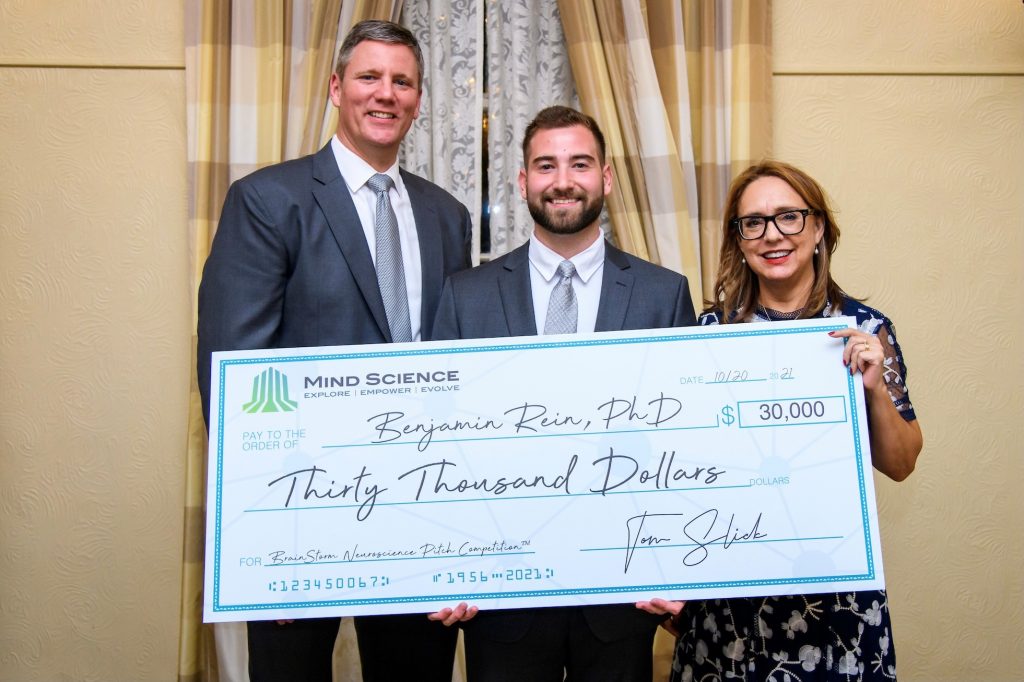 Launched in 2018, the BrainStorm Neuroscience Pitch Competition is designed for early‐career neuroscientists teamed with senior primary investigators. The equity-free funding helps support pilot studies so young researchers can demonstrate a proof of concept when applying for grants that can support further investigation.

He plans to use the Mind Science funding to support his research on the role early experiences play in shaping the social development of our brains. Families with autistic children are not the only ones to benefit from Rein’s discoveries.  The ongoing pandemic has caused periods of sustained isolation for children.

The scientist explained in his pitch video how a system of several parts within the brain responsible for social development is disrupted in children diagnosed with autism. While researchers think a genetic mutation could be behind the lack of social development, Rein thinks social experiences may also shape how the brain develops.

“We know how social isolation impacts the brain, but we haven’t researched the role social interaction plays in how the brain controls social function,” Rein said. “The award will enable me to explore this research question that I think is incredibly important.”

Mind Science advisors mentored the three BrainStorm finalists on communicating complex, groundbreaking neuroscience ideas in their video pitches. Mind Science supporters and the general public watched the three online pitches, then voted to select who would win the first prize of $30,000 and the two runners-up awards of $15,000.

Runner-up Vera Ludwig is pursuing her research at the University of Pennsylvania. She is interested in how meditation with a partner can reduce loneliness, a growing concern especially given the pandemic-induced shrinking of one’s social circles.

The benefits of solo meditation are well documented, yet little is known about the effectiveness of contemplative dyad mediation or paired meditative practice on brain activity.  Ludwig plans to study how meditating with a partner can increase feelings of well-being and social connection in young adults.

“We are social creatures, and yet, so many people are lonely these days,” Ludwig said. “This type of meditation can help people learn more about themselves and feel more connected in an authentic way.”

The other runner-up finalist Zulkayda Mamat is researching at Cambridge University. She plans to use precision brain mapping to uncover how the brain suppresses negative memories. Understanding how selective forgetting works can help people heal from the intrusive memories of trauma.

There are different mechanisms driving our ability to forget, as observed in people suffering from post-traumatic stress disorder replay painful memories. “Just like we have ‘supertasters’ who excel at tasting because they possess many more taste buds, we plan to study those who are the ‘superforgetters’ of unpleasant memories,” Mamat said.

Founded in 1958 by philanthropist Tom Slick, Mind Science has been focusing more on supporting promising younger neuroscientists in recent years. The awards help past winners fund research, such as the BrainStorm 2020 winning team of researchers Merridee Lefner and Matthew Wanat at The University of Texas at San Antonio. They are analyzing the neurobiology of motivated behavior to uncover how exactly “absence makes the heart grow fonder.”

“The Mind Science award helped me publish a paper on my findings in the Journal of Neuroscience,” Lefner said. “My hypothesis in my recent paper will help drive my future work.”

“We are funding valuable research that will bolster our understanding of the brain,” Good said. “We also are investing in the careers of early-stage neuroscientists interested in exploring the frontiers of consciousness.

“Mind Science is also promoting clear, effective science communication with our pitch mentoring, a skill every scientist should possess.”

Mind Science board of trustees chair Alan Kramer told the assembled audience Wednesday evening how BrainStorm was the organization’s way to bridge the gap between funding science and explaining it to the general public.

“This pushes us to look at a variety of approaches we can use to help scientists communicate engaging ideas in science,” Kramer said.