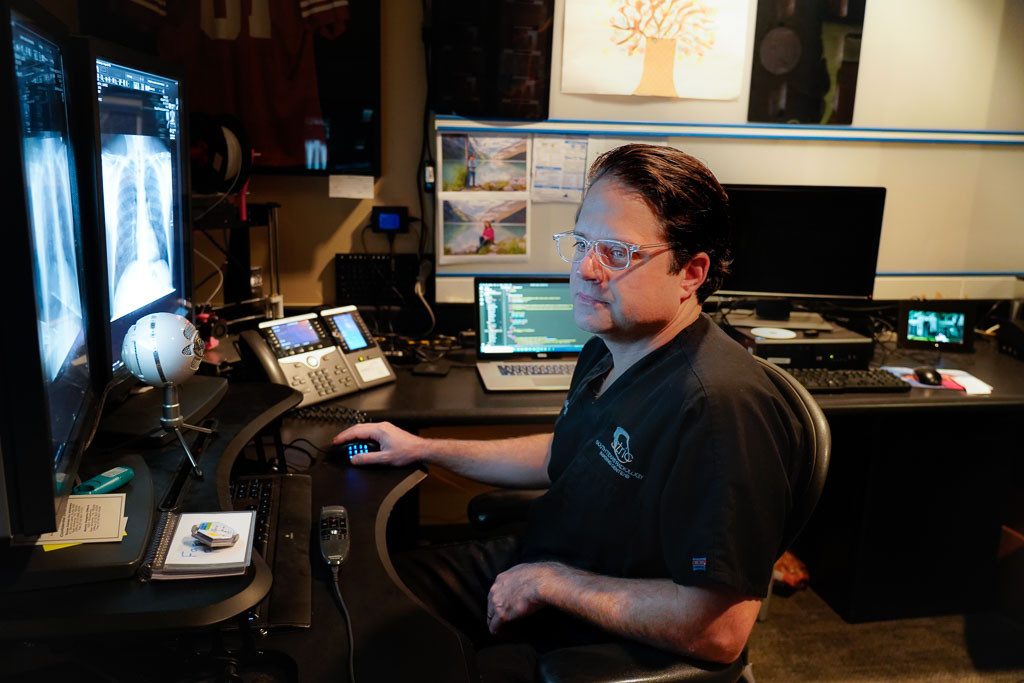 Artificial intelligence (AI) was front and center at this year’s Consumer Electronics Show because of its capacity to influence every aspect of our lives. Now, AI’s reach is touching upon healthcare.

Lance Reinsmith, M.D., is a radiologist with the South Texas Radiology Group and Intrinsic Imaging who is applying the power of AI to help those like him triage an overloaded system.

Images obtained by MRI machines, CT scanners, and x-rays give clinicians the ability to look for signs of disease or injury in a patient. These digital images have so much data they take considerable time to review. That makes spotting the ones that require immediate attention from the more routine “normal” scans challenging for the radiologist with an ever-growing workload.

“Most of us are operating at or near full capacity, and several projections show that our workload will continue to rise in the future,” Reinsmith said. “Many industries have seen a surge in automation, and medicine is no exception.”

There are routine functions in radiology—like measuring changes in the size of lesions—that AI could help automate. Reinsmith realized artificial intelligence and machine learning (ML) tools could analyze extremely large datasets such as radiology images to extract meaningful insights. His interests in big data analytics and neural networks led him to develop AI tools to help streamline a radiologist’s workflow, by sorting and flagging images that require more immediate attention than normal scans.

Reinsmith never trained as a computer scientist, but the liberal arts major knew AI could make a difference in radiologists’ growing workloads.

Reinsmith is one of two medical directors working on AI at Intrinsic Imaging, a San Antonio medical imaging core lab providing imaging support in clinical trials for medical devices in commercial development. Its lab helps validate novel computer algorithms ML/AI companies are developing to assist healthcare providers in the future. Intrinsic works with nearly all the nation’s ML/AI biotech startups to evaluate the model’s performance and collect the necessary data for Food and Drug Administration (FDA) approval, according to Richard Benedikt, a radiologist at Intrinsic.

“We’ve become the busiest lab testing AI products being developed for the clinical market,” Benedikt said. “Intrinsic Imaging has become the world leader in imaging support for the FDA clearance of AI software.”

Reinsmith explained the emergence over the past year of AI in healthcare stems in parts from these deep neural networks approaching human performance levels in detecting malignant growths in images such as mammograms.

“We’re in the early days of using AI in medicine,” Reinsmith said. “Mammograms are the perfect use case for AI because the exam parameters are uniform and criteria for classifying abnormalities are tightly controlled.”

He wanted to use neural networks to analyze medical images, but training it by using known diagnoses meant getting the model to “see” the way a radiologist’s eyes identify information in an image that correlates with normal structures or disease states.

Medical images have millions of pixels and densely connecting multiple layers of a complex neural network potentially creating billions of individual data points to train. Overcoming these obstacles involves understanding the workings of the human eye as well as our brains. That’s where convolutional neural networks use filters called “convolutions” to mimic the receptive fields naturally found in our retinas.

Models trained to identify everyday items in images use these convolutions to highlight distinctive features of different objects.  Reinsmith used one such model but fine-tuned some of it to analyze specific parts in chest x-rays.  The result is an algorithm that is 90 percent sensitive for detecting a normal chest x-ray.

A lack of good quality, accurately labeled medical image datasets limits the model, but Reinsmith said, “radiologists in our city are hard at work to solve this problem.”

Healthcare’s Use of AI In Early Adoption Stages

Intrinsic Imaging founder, vice president, and chief medical officer Amit Mehta, M.D., is a San Antonio radiologist and investor who sees AI as evolving as it learns more from working with better, more diverse data sets. As a tool, AI can help radiologists, it but “won’t be replacing clinicians anytime soon.”

“There is some misunderstanding that AI that can do everything,” Mehta said. “The big push in medicine is to find abnormalities faster, and AI can help with that.”

Mehta pointed to Reinsmith’s unique ability to bridge two worlds: that of technologists expanding the limits of what humans can do and of clinicians who diagnose the patient beyond what is on a scanned image.

“Interpretation of an image goes beyond the computer-assisted ability for detection, it’s the synthesis of what a patient is going through to make an accurate diagnosis,” Mehta said. “It’s the combination of the two that makes for great care.”

The AI adoption curve is still early, Reinsmith said. He is betting AI will be used initially for an intelligent workflow to help radiologists become more efficient with their time to focus on the most pressing cases first.

“Emerging technologies in automation offer enticing options for improving what we can get done in our busy schedules,” Reinsmith told attendees at the 2019 State of the Industry Wednesday evening.  “What’s more, these advancements offer the potential to make us better at our jobs with enhanced diagnostic abilities and optimized treatment plans.”

As Reinsmith continues refining the model, he is confident healthcare will soon realize more benefits as AI becomes widely adopted.

“So much of our jobs taken up with mundane tasks. AI can free us up to focus more time on patient care,” Reinsmith said. “AI can make us better at what we do—research, diagnosis, and better use our time.

Featured image is of Dr. Lance Reinsmith, one of the speakers at The Health Cell 2019 State of the Industry event. Photo credit: dlmoorephotography.