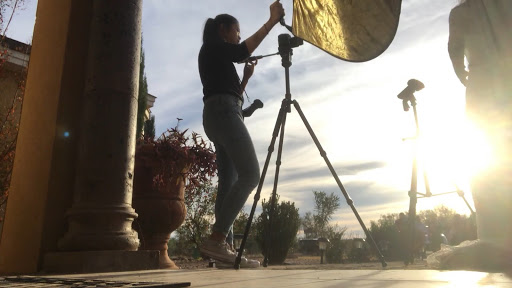 College students are popular sources of temporary help for local businesses. Younger high school interns may pose some challenges for employers, but with preparation, the experience can yield benefits for students and employers alike.

We interviewed students from San Antonio’s International School of the Americas to ask about what they learned from their internship experiences so that students, parents, and employers alike can understand what high school seniors can learn from internships.

“It varied from designing mounts and container holders to helping build a compression machine,” Alejandro said. “I was nervous at first but Mr. Grey was very helpful.”

Alejandro learned how to use SOLIDWORKS software to successfully print three-dimensional objects. It was difficult to learn how to use the software, but once Alejandro got used to it, the process “became pretty easy for me.”

The high school senior had some background knowledge in the reverse mechanical engineering field and plans to take mechanical engineering courses at Texas A&M Kingsville once he starts there this fall. Still, Alejandro demonstrated how many students coming of age in today’s workforce are often familiar with technology from an early age and can easily adapt to using new skills.

Alejandro advised interns should take advantage of every opportunity mentors provide to learn not only the subject matter but to practice professional communication skills in the workplace.

“Lacking experience in the field shouldn’t prevent you from seeking an internship experience,” Alejandro said. “I’m glad I had this opportunity before pursuing it in college.”

High school senior Zach Alaniz was recruited to work for Sarah Martinez, editor and publisher of the San Antonio Current, who helped him develop story ideas. Alaniz reported on popular events in the San Antonio scene including 10 things to do besides Fiesta, Alamo replication in the hit game FortNite, and Jeremy Renner coming to San Antonio Summer 2019.

“I want to become a novelist, and so I figured working for the SA Current would help me reach that goal,” Alaniz said. “When you write, you have the power to immerse your readers in the story.”

The busy student published a total of 27 articles in the past six months and plans to continue writing for the San Antonio Current after graduation until he leaves to pursue studies at Texas A&M in Kingsville.

Despite his productivity, Alaniz observed that high school students may not be as experienced in time management as older interns, as he learned how to meet deadlines both at school and in his internship.

“A high school student could be leagues beyond a college student in terms of writing ability, but the college student is likely more experienced in time management and professionalism,” Alaniz said.

Senior Alison Theis organized the Crohn’s and Colitis Foundation‘s annual fundraiser after being a volunteer team leader for the nonprofit organization over the past three years. Her internship featured her taking over planning responsibilities for the fundraiser in collaboration with Derek Dudson, the manager for Central Texas Takes Steps.

“It was difficult to balance my own schedule and conduct work for my internship at the same time but I had to make time in my own schedule to contact businesses,” Theis said. “My goal was to double the amount of money typically raised for Crohn’s and Colitis.”

Theis, who has Crohn’s herself, was determined to reach her goal, so she reached out to as many sponsors as possible. She asked for donations via Facebook, sold snacks and beverages, and advertised for donations online. Theis ultimately raised over $2,500 toward research.

“I felt confident in communicating with others and so I knew that I could do the same things a college student could accomplish,” Theis said.

Angela Canonizado interned with Cyngi Films in her senior year. Cygni films is a local photography and filmmaking company in San Antonio focused on weddings, music videos, cooperate commercials, and photo sessions for couples and families.

Canonizado worked with camera and audio equipment including drones and boom microphones. She filmed several weddings, edited photos and videos, and did some photography shoots.  The student said one of the biggest challenges of working as a photographer and filmmaker is time management.

“If you’re running out of time, you may become stressed and not have a good composition of what you’re trying to capture,” Canonizado said. “Some things happen only once and aren’t able to be recreated. You need to be aware of what’s happening and what is next so that you don’t miss anything.”

Canonizado practiced her communication skills as she consulted with clients professionally and was able to travel with the company. One of her favorite shoots was for a music video filmed with local television news team KSAT 12

“I got to meet a lot of interesting people at the weddings I went to and I also traveled to a lot of different cities,” Canonizado said. “I met many creative people and enjoyed seeing the process, from pre-production to post-production, unfold.”

The student will pursue a degree program in film at the University of Northern California. Her internship afforded Canonizado opportunities to add to her portfolio despite her age.

“If you put in work, you can accomplish much more than others, including a college student,” Canonizado said. “What I filmed was the quality of work that I can produce, and it’s due to what I can think of creatively, and not necessarily my education.”

The interns learned the value of time management in meeting deadlines while maintaining a full load in high school.  Discovering the importance of communication in interactions with clients, businesses, and their mentors was critical for the students. Employers also understood the need to assign tasks a high school senior can reasonably complete, albeit ones with a learning curve.

“With the growing demand for tech and cybersecurity talent in San Antonio, I believe training a local workforce that is still in school is key to not only Jungle Disk’s future but also other local businesses,” Piatt said. “Both of these programs play an important role in training and developing our future local talent pipeline.”