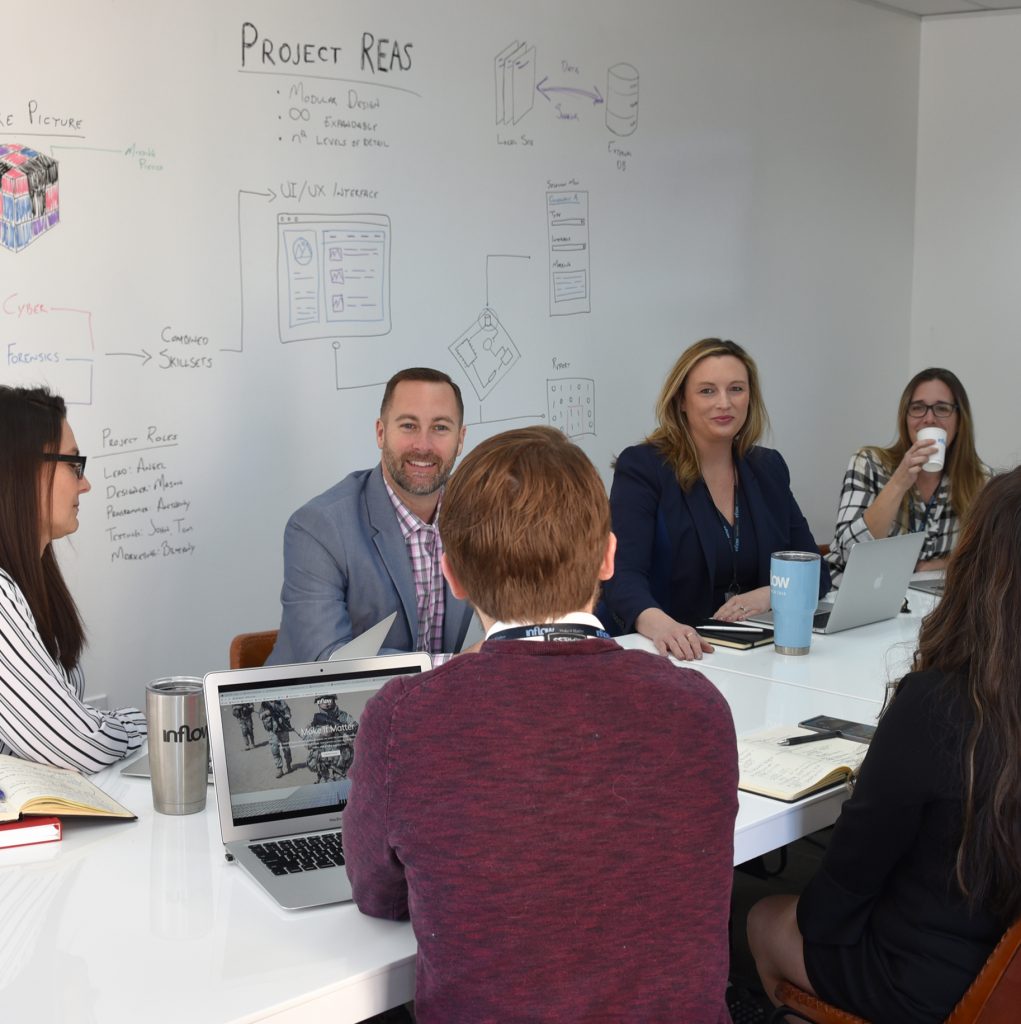 Crockett founded the cybersecurity company to provide specialized expertise and services to the U.S. government. They have over 50 employees working at multiple locations worldwide on everything from cyber and intelligence to identity intelligence and specialized training.

“We take concepts and best practices leveraged in the IT [information technology] industry and apply it across the intelligence community and traditional weapons analysis,” Crockett said. “With our streamlined processes, something that would take a year to analyze we can get done in a month.”

Crockett was born in Waco and grew up in Texas and Singapore. Her supply chain education and experience while working at IBM on cutting edge IT solutions for U.S. government customers brought her to work for an Army veteran who started a new company, Information Innovators Incorporated. After that business grew into a $100 million enterprise, Crockett left to get her MBA degree at the Massachusetts Institute of Technology where she met classmate Ryan Hayes. The two partnered to create Inflow in 2014.

The startup has developed a new way of fusing multiple disciplines for unique processes that produce actionable intelligence—information that can be acted upon to prevent or stop an adversary.

Integrating different approaches into determining what bad actors may be planning means Inflow can provide U.S. government agencies insights on where to expect possible threats before they happen, rather than react to them after the fact.

“The challenge with about half of our cyber companies in San Antonio like Inflow is that the work their primary customers do is classified,” Jungle Disk CEO Bret Piatt said. “It doesn’t mean we don’t have cyber innovation—it only means we can’t know about it.”

Using reverse engineering, Inflow has identified sources of specific technology components used in improvised explosive devices (IEDs). One public example of Inflow’s support is first responder training for the Bureau of Alcohol, Tobacco, Firearms, and Explosives (ATF) in Alabama. The scenario-based training helps field agents decipher evidence recovered at the scene after an explosion.  This type of training enabled first responders to identify the Austin bomber in 2018.

“Our experts train them [ATF] on how to rapidly retrieve critical intelligence at the scene of a crime because a package will look different depending on whether it uses home-grown explosives rather than C4,” said Crockett.

(The U.S. military is the primary manufacturer of the explosive C4; it is not easily available.)

Only recently has the U.S. Air Force admitted in open sources that the San Antonio-based 24th Air Force is the service’s lead organization for offensive and defensive cyber operations. Up until 2018, there was no mention of offensive cyber countermeasures against adversaries. Now called “full spectrum cyber operations,” it requires specialized expertise that Inflow provides.

Inflow has also used its unique processes to project how an enemy might use weapons in a future attack, such as drones.

New Jersey’s Newark Airport is the latest airport plagued by unauthorized drones. A commercial pilot spotted a drone as he was landing a civilian airliner January 22. While troublesome drone operators at airports pose air safety concerns, other adversaries are already resorting to this common consumer technology to create new weapons.

Mexican drug cartels have figured how to outfit commercially available drones with explosive devices. ISIS has already modified small mortar bombs to use them on exploding “suicide drones” in attacks on Syrian and Iraqi troops and members of the US-led anti-ISIS coalition.

“Technology is getting cheaper, so we need to develop emerging threat research and methods,” Crockett said. “That’s what we’re actively doing as a company.”

Both offensive cyber weapons and IEDs have cyber components. Inflow looks at combating adversaries by thinking through the most likely low-tech attack approaches and possible countermeasures. They’re also leveraging big data analytics and artificial intelligence to predict the next threat before it happens by looking for commonalities analysts could not find before. Inflow develops prototypes in a laboratory reverse engineering different kinds of IEDs, in part, to create a new database about IED making.

“The challenge is you need lots of data, so we’re setting up these analytic processes for the future,” Crockett explained. “Our value is to help create prototypes to make a case for collecting certain kinds of data.”

Crockett said Inflow is also doing more material analysis, taking approaches from other classified analysis programs and applying them to situations never used before. Getting niche expertise into databases that can be updated is critical to stay ahead of emerging threats.

“We have to get away from leveraging the expert versus the process,” Crockett said. “Look at latent fingerprint analysis experts—they’re dying out. Also, there are too few engineers who are comfortable with analyzing an IED.”

Integrating multiple disciplines for a more streamlined, responsive process is why the company is called Inflow. In information logistics inflow is the optimized flow of information across an organization.

“As we mature as a country we have to decide what is important because we have limited resources,” Crockett said.

Inflow is looking to expand its footprint in San Antonio as it continues its work overseas. Crockett expects the company will continue to grow as the government modernizes digitally and develops its cybersecurity countermeasures and offensive capabilities.

“San Antonio is the epicenter for cyber for the state of Texas, and companies like Inflow demonstrate why,” said Amanda Keammerer, acting vice president for cybersecurity and director of CyberSecurity San Antonio at the San Antonio Chamber of Commerce.