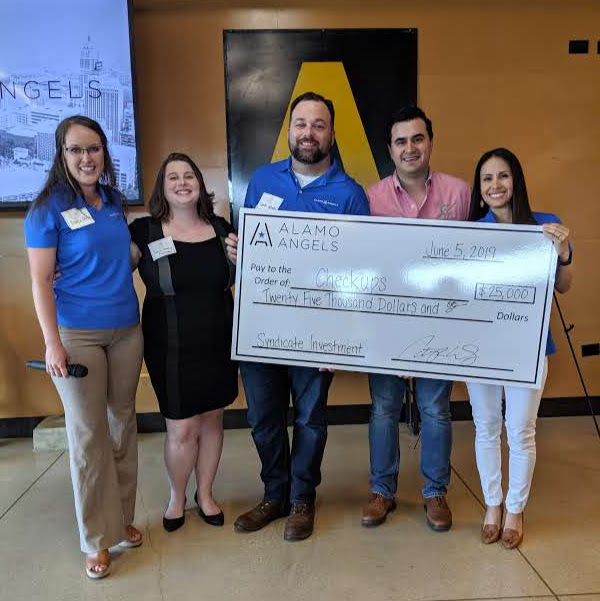 The Alamo Angels have committed to investing at least $25,000  in early-stage financing equity funding for Checkups, Alamo Angels executive director Cat Dizon announced at the investors’ event Wednesday evening. The San Antonio-based startup provides bond agencies and local municipal jurisdictions a mobile application and software platform for monitoring clients who are out on bond while awaiting trial.

“Alamo Angels saw a huge opportunity to invest in both companies and add them to our growing portfolio of local startups,” Alamo Angels director of operations Rebecca Derby said.

The pre-accelerator program helps startups prepare for early-stage investment or participation in accelerator programs. Each of the six teams must have a working proof-of-concept or minimally viable product, have raised less than $50,000 from angel investors, employ at least one full-time team member, have a legally formed business, be based in San Antonio, and belong to the Geekdom co-working community.

Checkups is a service designed for low-risk clients, usually ones awaiting trial for first offenses. Location monitoring is a court-ordered alternative to incarceration while awaiting trial.

A judge determines the extent to which people are monitored on a case-by-case basis, based on the law and on an assessment of risk. Some individuals must remain in their residence 24 hours per day, while others are approved for work, school, or to go to attorney appointments and court appearances.

Electronic technology helps verify compliance with bail conditions. As part of pretrial release conditions, defendants are expected to check in regularly by phone, report in person, or submit to supervised electronic monitoring. The judge in a jurisdiction mandates the bail conditions for each case, including the type of monitoring. For more serious cases, the judge can decide on an ankle monitor.

The check-in process is designed to ensure that the defendant appears at all scheduled court hearings until the case is decided. Officers enforce the court’s terms of supervision during probation and pretrial, getting electronic notification when a person moves into or out of approved or prohibited areas, or if the monitoring device is tampered with or removed.

“Everyone on bail needs monitoring,” Pavlioglou said. The bail bonds person does the monitoring in person, typically meeting with a thousand people every month.”

The app changes that paradigm. Once downloaded onto a person’s cellphone, the app tracks a person’s movements in real time and sends reminders of scheduled weekly check-ins, curfew times, and court dates.

Most competitors in this market segment are selling ankle monitors that can cost up to $300 each.

“I’m the only one doing an app-based approach,” Pavlioglou said. “Ankle monitors typically have a short cable that’s only a foot long, and the person must wear it while charging it for two to three hours every single day.”

Pavlioglou launched the idea for his business three years ago after he experienced firsthand the inconvenience of weekly check-ins while he waited for his court date.

“While sitting in a lobby with 20 or 30 people all waiting on probation, I saw for myself how much time is wasted,” Pavlioglou said. “Not only were we all trying to keep our jobs, but the officers were overwhelmed with their caseload of check-ins.”

The statewide average daily cost in Texas to monitor one person on probation is $1.63, according to Bexar County numbers. With an estimated 23,346 adults waiting on a court date for misdemeanor charges, the monthly Bexar County costs for monitoring top $1.1 million.

The entrepreneur plans to charge reasonable fees, “for less than what you what you’d pay for parking for one visit to the courthouse,” he said.

As the only employee so far, Pavlioglou is in contract talks with seven smaller county jurisdictions in Texas for his service which will help generate revenue. Once revenue can support the hiring of in-house customer service and software developer staff, Pavlioglou plans to focus on servicing larger counties.

“Just in Harris County there are over 100,000 in the court’s monitoring system, while Dallas County has 125,000,” Pavlioglou said.

Entrepreneurial adviser Nick Longo thinks a startup that “can help both sides of a market” is one that has identified a market fit.

“Not only does it help those on probation or waiting to go to court, but it also helps the overloaded court and probation systems by saving them time and resources to keep track of people,” Longo said.

Geekdom pre-accelerator program director Joyce Deuley saw how Pavlioglou progressed from when he first conceived of the business concept three years ago to where the startup is now after completing the six-week program.

“He used to work for me for a member company at Geekdom, so I’ve watched Enrique grow as a founder over the past three years,” Deuley said. “I am beyond impressed by what he has achieved. Alamo Angels’ partnership with Geekdom is helping to make a difference with promising entrepreneurs like him.”