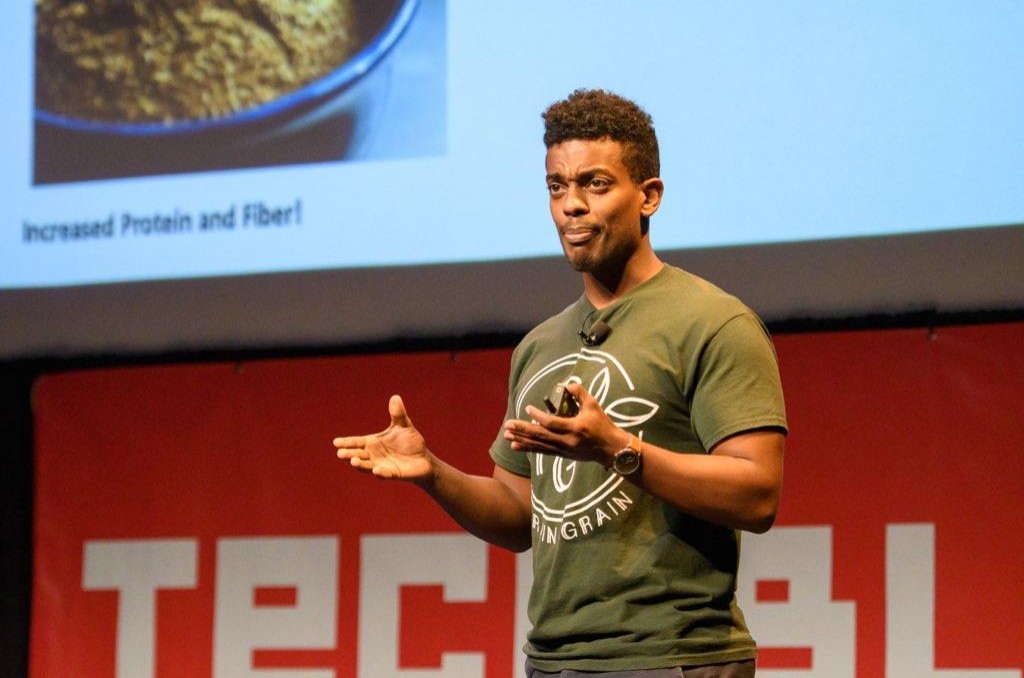 As craft beer brewing grows in popularity, so does the staggering amount of leftover spent barley grains — over 6 billion pounds annually. That opportunity for food innovation is what drove Yoni Medhin and Matt Metchly to launch their low-carb spent barley flour company.

“Every six-pack of beer produces about one pound of spent grain,” Medhin said.  “After all the carbohydrates are removed in the beer-making process, what is left is mostly protein and fiber in spent barley.”

Other than selling it to cattle feedlots or sending it to landfills, breweries have long tried to repurpose this byproduct. Grain 4 Grain’s patent-pending innovation converts the spent grain into flour in 15 minutes. Their products are already in over 200 H-E-B stores and used in more than 200 local bakeries. The founders will use the $50,000 to penetrate more of the wholesale market.

“We’re interested in making San Antonio a center for food innovation,” Medhin said in his pitch.

Roman Sandoval’s Allosense, an integrated platform that tracks assets using smart sensors, came in second place, winning an award of $20,000.  The company has won Air Force contracts and will use the funding to expand its sensor tracking platform.

Paul Kang and Ethan Jeon’s FastVisa, a software-as-a-service (SaaS) platform for integrated immigration and visa case management, placed in third for a $10,000 prize. The Dallas-based startup is also participating in RealCo’s accelerator program.

Tech Fuel is open to early-stage companies with an innovative technology-based business, including biotechnology, finance, and clean energy startups across Texas. Eligible companies must have a product or service that is live and on the market, have received less than $1 million in outside funding, produce less than $1.5 million in revenue, and intend to grow their companies primarily in Bexar County.

Of the 41 companies that applied for the 2020 virtual pitch competition, 15 applicants or little over a third came from outside San Antonio, principally Houston and Austin, chief talent officer of Tech Bloc Dax Moreno said. The 25 semi-finalists came from diverse sectors like biotechnology, managed information technology, consumer retail, and advanced technology.

“Many of these applicants found unique, intelligent ways to respond to the industry issues created by the pandemic,” Moreno said. “The finalists leveraged innovation and creative uses of technology to address customer needs, given our current economic conditions.”

Finalists will be given a spot to compete in the May 2021 Texas A&M New Ventures Competition, Scotti said.

Two finalists, Mineral Analytics and Allosense, applied to Tech Fuel last year but were not selected as finalists. After getting judges’ feedback, both reapplied this year after refining their concepts. The focus has been to mentor Tech Fuel applicants to help founders clarify their value proposition, said Ileana Gonzalez, Tech Bloc operations and community manager. One of the semi-finalists, FlexDesk, even gained judge turned mentor Oscar Guajardo from Northwestern Mutual after applying.
“We strive to give startups applying to Tech Fuel actionable feedback so they can successfully make it to the finals on their next try,” Gonzalez said.
In 2019, data protection and privacy company Rectify won the top prize of $50,000. CheckUps, an app-based system for judicial court administrators,  won $20,000 in second place. Train the Mind, provider of mental skills training for athletes, placed in third for a $10,000 prize. Sendspark, a video outreach platform for businesses, received an Honorable Mention award of $7,500. Tuuk, a startup that partners with financial services and insurance companies, was awarded $2,500 for placing as a finalist.
Tech Bloc CEO David Heard emphasized how Bexar County’s support enabled the third Tech Fuel competition to be held over the past five years.
“As a condition for accepting the prize money, this year’s winners will stay in Bexar County to build their companies,” Heard said. “We’re appreciative of the County’s vision and investment in our tech ecosystem, especially since we’re in the middle of a pandemic.”