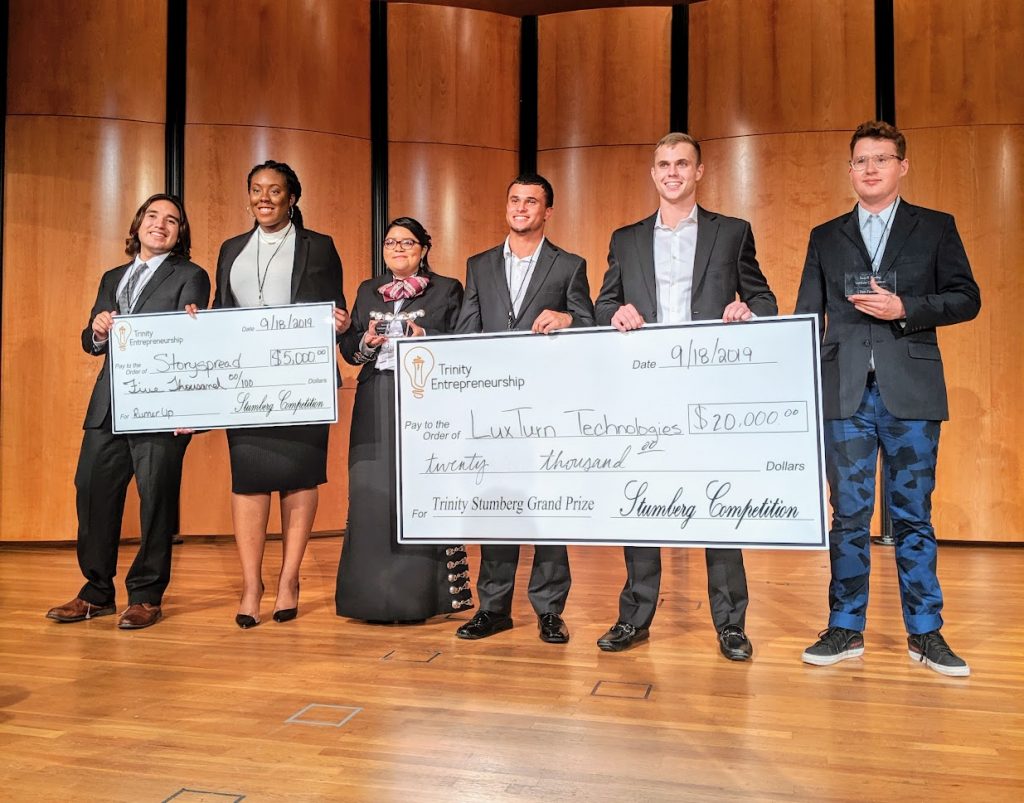 LuxTurn Technologies, a device motorcyclists use to make their turn and brake signals more visible to motorists, garnered the top prize of $20,000 at Trinity University‘s Louis H. Stumberg Venture Competition Wednesday. In a departure from past practice, the judges decided to split the $25,000 prize into two checks. Runner up StorySpread, a software that gives give young adults the opportunity to create stories and comics, received a check for $5,000.

“The judges wanted to recognize two strong startup teams this year and gave them both an amount that would enable them to move forward with their innovative products,” said Luis Martinez, director of Trinity’s Center for Innovation and Entrepreneurship.

Even more evidence of a strong showing in the finalist entrepreneur teams in this year’s competition is the fact that three of the five winning teams — StorySpread, heARTful, and Skatecuff — are composed entirely of first-year students.

Since its inception in spring 2015, the annual Stumberg Venture Competition has awarded student entrepreneurs more than $260,000 in seed money, Martinez told the audience. Trinity’s competition has helped launch 26 student-founded startups, including companies such as Coldeclara, Quick Sip Coffee, and PATCH.

The competition, hosted by Trinity’s Center for Innovation and Entrepreneurship, is a two-part pitch event hosted each spring and fall. Each spring, Trinity student teams compete for one of the five $5,000 awards, with each team member winning a spot in the program’s summer accelerator, summer housing on campus, a $4,000 stipend, one credit hour, and mentorship. Finalists compete in the fall pitch competition for the top prize of $25,000 in non-dilutive seed funding.

Robert Magee and Chris Stewart, both finance majors who will graduate in 2021 met in an entrepreneurship class and decided to create an after-market signal accessory that is easy to install on a motorcycle. It illuminates the ground with a large, flashing, amber equilateral triangle to signal a turn or lane change or can project a braking signal when the cyclist applies the brakes.

“I’m a motorcyclist, so every time I ride, my greatest fear is cars,” Magee said. “I set out to create something that would make motorcycles more visible to cars.”

The duo taught themselves enough engineering skills to assemble each unit after 3-D printing the plastic housing for the circuit board. The $20,000 will allow Magee and Stewart to manufacture enough units to fulfill the more than $22,000 in pre-orders.

“I was really impressed by the depth of knowledge they applied to their proposal, the simplicity of the design, and their ability to sell it once it gets to market,” said judge Uchennaya Ogba, co-founder of EHCÜ Public Relations.

Runner up Chikanma Ibeh (Class of 2022) launched StorySpread software to give users this ability to create and monetize digital stories and comics, no matter their drawing ability. She and Wren Ramos created the platform so users can create avatars, create their own scenes and backgrounds, and eventually receive ad revenue if their work receives a certain amount of traffic.

Estella Frausto (Class 2021) founded the music program to offer affordable mariachi lessons to those in the Southwest High School District and plans to launch a mariachi market-style website to help people find mariachi bands.  Houston native Andrew Koob (Class of 2022) created SkateCuff to enable him to go to class and lock his electric skateboard securely after he learned his parents wouldn’t let him take his car to San Antonio. He plans on filing a provisional patent and eventually placing his first order with a manufacturer.

Another Stumberg first was Bradley Sykes’ and Chryslyn Perkins’ pitch of their nonprofit organization heARTful. The two explained how their nonprofit creates fully accessible exhibits for people with disabilities so that they may experience art, then announced they were withdrawing from the competition.

Their reason? They realized the best opportunity for heARTful’s long-term sustainability was in joining nonprofit Inspire, which “creates and celebrates the arts as a force for education and healing across San Antonio’s diverse cultural communities,” according to its website.

“This will give us the opportunity to make sure that this vision lives on beyond just what we’ll be able to do,” Skyes said. “It was important to sustain the vision because we want to touch as many lives as we can.”

Martinez stressed how much progress the teams had made since the spring competition and said he was confident in the future potential for these student founders.

Last year’s top prize winner Jacob Hurrell-Zitelman looked on as the LuxTurn Technologies team was congratulated. Hurrell-Zitelman had closed another deal in the past week, this time to sell his Quick Sip cold brew coffee at the Hotel Emma.

“I’m graduating early, so I’ll be done with school in December,” Hurrell-Zitelman said. “January, our new manufacturing facility opens near I-35, so I’ll be able to focus on the company in the new year.”