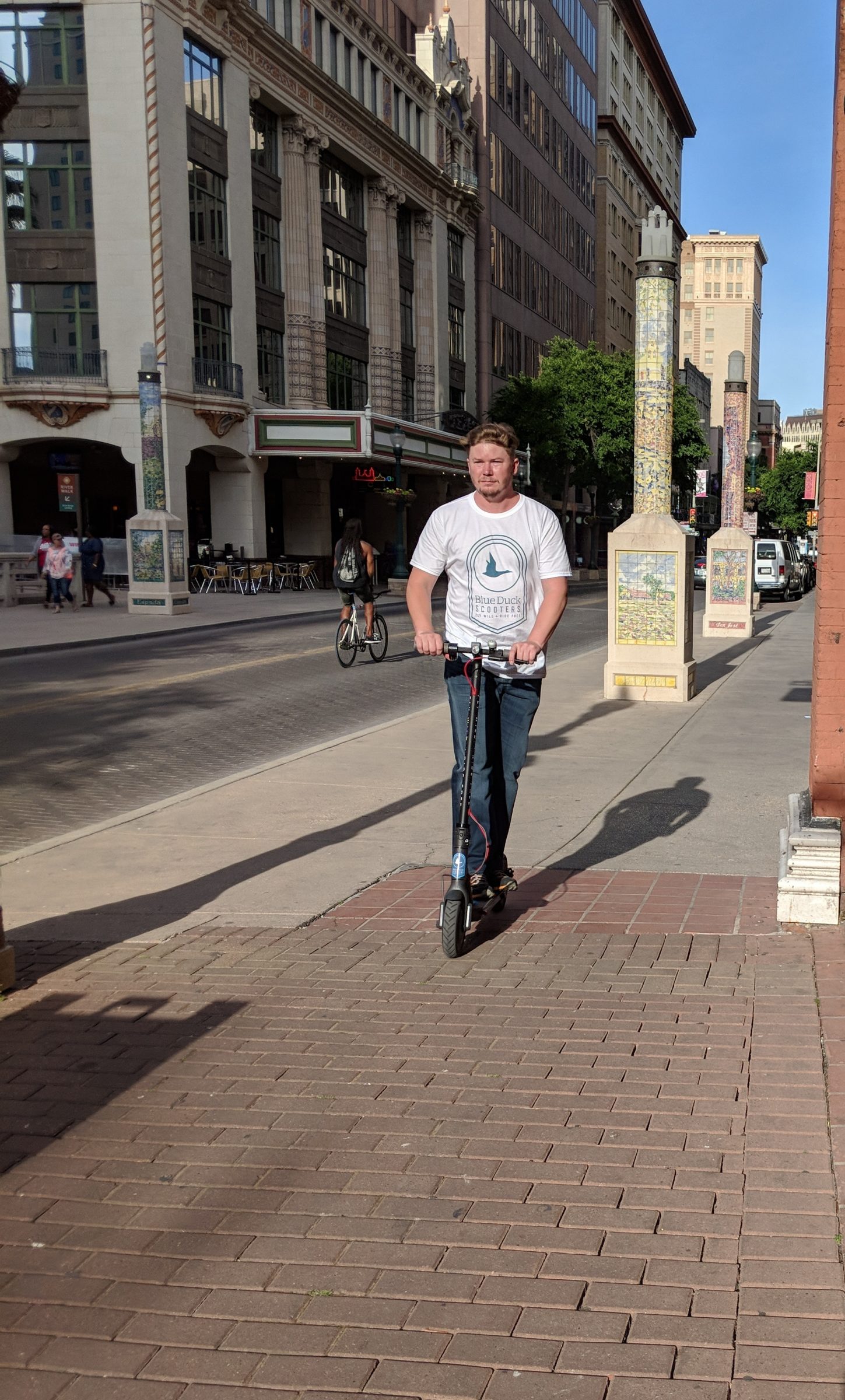 The next wave of transportation innovation is coming, and it’s originating from a San Antonio-based startup. Blue Duck Scooters will soon offer rentable electric-powered scooters at college campuses and city downtowns, with the imminent launch of its first 1,000 scooters in San Antonio’s urban areas “within days,” according to Blue Duck co-founder and president Eric Bell. The company tested its dockless scooters at SXSW in March and at the SA Tech Trek last week during Fiesta.

A user downloads the free Blue Duck Scooter app to locate the nearest scooter, then scans its QR code to unlock and rent it. Each scooter weighs 24 pounds and when fully charged, has a range of 18 miles at a maximum speed of about 16 miles per hour. It costs $1 to unlock the scooter and 15 cents a minute to ride. When finished, the rider uses the app to lock it up again and leave it where one would typically park a bicycle. Blue Duck Scooters are GPS-equipped and do not need to be returned to a docking station.

The startup’s innovative approach is in leveraging technology to address the transportation challenges of “the last mile,” or the movement of people from a transportation hub or parked vehicle to a final destination.

Blue Duck’s two main competitors are both based in California. Bird was founded and financed by former Uber executives and recently launched in Austin without permission. Lime Bike, the largest dockless bicycle company, recently unveiled its dockless scooter service. Austin is working to craft regulations for dockless bike-sharing before allowing these companies to operate. Concerns over “graveyards,” in which piles of discarded ride-share bicycles and scooters impede access for pedestrians and cars alike, have already surfaced in Austin and other places where they are in use.

Blue Duck’s scooters are both electric and dockless like its competitors, but they have an additional geo-fencing feature that prohibits them from operating in off-limits areas. GPS enables tracking of each scooter for pick up every evening for charging overnight and can be deactivated if necessary via a remote kill switch.

“Our company is the only one that can geo-fence our scooters out of sacred spaces like the Alamo or the Riverwalk,” Bell said. “Our good-faith approach and technology is how we differentiate ourselves from our competitors.”

Bell emphasizes the company’s dedication to being a good-faith provider of scooter service and its extensive discussions with both City and County officials on regulating the emerging dockless rideshare marketplace. The company’s government relations team is also busy developing dockless transportation strategies for consideration in the next Texas state legislative session that will include requirements to collect scooters and geo-fence them from specific public spaces.

“We’re targeting every major public university in the southern U.S., which is a list of about 50 universities or a population of about 4 million college students,” Bell said.

For every 100 students, the startup plans to have five scooters available at all times. Bell is confident the company’s 5 percent model will help alleviate traffic and parking problems, problems that college students and city dwellers alike face.

“The addition of Blue Duck to San Antonio’s tech ecosystem will bring an innovative edge, especially to our transportation system,” The IMG Studio CEO James Chandler said. “And people fail to mention it, but they’re really fun to ride, too.”

Bell co-founded the company, which has about 45 to 50 employees, with his father Paul Bell and brother Jeffrey Mangold. The company is soliciting investment and has garnered investor interest with its $50 million series A valuation, Bell said.

“They’ve got an aggressive vision, and it could really take off in states like Texas where we have such big spaces, or at universities with large distances between buildings,” TechBloc CEO David Heard said. “Blue Duck is way ahead of the curve and building a solution that provides that last-mile transportation while proactively addressing the concerns over scooter use raised in other communities.”

The company is named for Blue Duck, an Old West outlaw from the late 1800s who was the inspiration for Bluford “Blue” Duck, a figure in Larry McMurtry’s novel Lonesome Dove.

One final question was whether Blue Duck could be lured away as it scales nationally. Bell’s answer was equally emphatic.

“We want to build our business here because we believe in the community,” Bell said. “San Antonio has changed over the past three years—we’re developing into a big tech city, and we’re not done yet.”