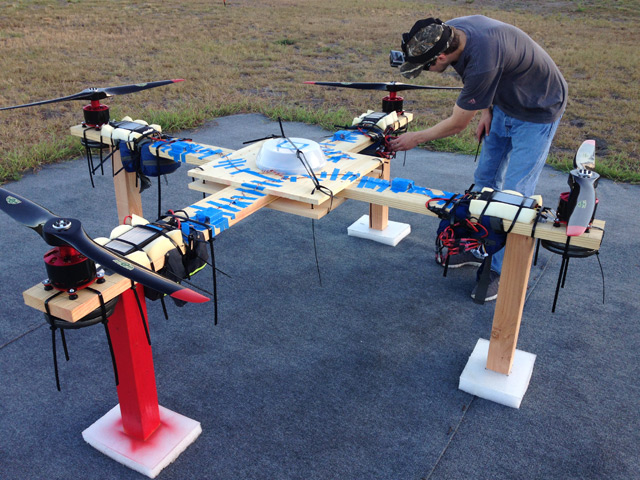 The future of product and people delivery via large drones is not as far off as you might think, especially if you ask AVA Propulsion, a San Antonio-based drone-building startup.

David Gonzales, chief executive officer (CEO) and Kyle Johnson, president, are developing and building hardware and software for large-scale vertical take-off and landing autonomous drones that can move cargo or transport a person to hard-to-reach places.

AVA Propulsion, Inc. (which does business as Aerial Vehicle Automation) has two models depending on customer needs. Their X8 is an electric multi-rotor platform that can deliver payloads up to 400 pounds over shorter distances. Their Winged X8 is a gasoline-electric hybrid platform for flying 200 miles with five flight hours. The Winged X8 takes off vertically, then flies using a wing for peak efficiency.

Developing and field testing their giant drone prototypes at a location in northeast San Antonio, AVA aims to use an automotive production line and supply chain approach to affordably manufacture all the components for the drone propulsion system and the aviation platform for the two models they offer.

The company holds patents pending for the drone vehicle architecture, proprietary code for running the sub-systems, supply chain elements, and the large speed controller, which is the core enabling technology for the large drones.

Carrying cargo by air is expensive, Gonzales said, anywhere from $200 to $300 per hour to operate a helicopter or almost $130 per hour for a Cessna. The cost per delivery would be far lower and faster, as retailers don’t need to fill an entire vehicle. Leveraging the automotive manufacturing model and supply chain approaches helps reduce production costs.

“Using our drones is a much more affordable option as we can get that cost down to under $10 per hour for cargo delivery by drone,” Gonzales said. “This is a transformational technology that will allow us to transport anything up to 200 to 300 pounds at low cost over several hundreds of miles.”

The founders have been busy building a client waiting list that spans multiple industries and sectors.

“Our customers fall into three broad categories: Established cargo operators looking to save money, business logistics operators needing to move supplies quickly and for less, and the military moving urgent supplies or carrying an injured military member across the battlefield space,” Gonzales said.

The two business segments the founders want to enter first would be the overseas market where fewer regulations are limiting the use of drones for delivery services and the U.S. oil and gas industry, where flying critical parts to offshore oil rigs can cost almost $2,000 per hour for the most remote locations.

AVA Propulsion applied and was selected for two Phase I Small Business Innovation Research or SBIR awards in 2020 to address the Air Force need to carry cargo and injured military members in a theater of operations. However, neither award was funded due to the COVID-19 pandemic’s impact on the DOD’s resources.

Despite the delay in Air Force SBIR funding for drone development, the founders keep busy participating in a nationwide effort to transform transportation. The startup is one of the private-sector partners participating in Agility Prime, a non-traditional program seeking to accelerate the commercial market for advanced air mobility vehicles. The U.S. government seeks to develop vertical take-off and landing capabilities for innovative electric vertical take-off and landing or eVTOL aircraft that use electric power to hover, take off, and land vertically.

AVA Propulsion is a subcontractor on an active Agility Prime contract for the Air Force, helping to design a drone as an autonomous weather platform that collects weather data for U.S. air assets operational planning.

“This launch of Agility Prime is so exciting. This technology has the potential to make vertical flight more affordable and more widely available,” said Elaine Chao, Secretary of the U.S. Department of Transportation.”

An avid interest in building and flying drones led to a friendship between Gonzales and Johnson over 10 years ago that grew into the partnership that powers their ambitious startup. Working with their team of more than 50 part-time contractors, engineers, and experts they have already designed, built, programmed, and successfully flown drones with over 400 pounds of thrust on a small budget.

Gonzales invented the patent-pending Layered MagWheel concept during his teenage years, becoming the first winner of the $125,000 ConocoPhillips Energy Prize for the magnetic propulsion and braking product concept. He designed it to be positioned inside the wheels of any vehicle to act as the braking system, the drive motor, and a solid-state transmission all-in-one package.

In 2008, Gonzales founded his first company, Impact Advanced Concepts, LLC, to develop environmentally friendly and energy-efficient technologies. Since launching AVA Propulsion in 2016, Gonzales oversees the engineering and software coding while Johnson, a self-taught engineer, teaches the drones how to be stable and does design and build work on the large drone structures.

“As we worked on different models, we’d talk about how to superscale the drone platform enough to carry a heavier payload or a person,” Johnson said. “At the time, no one had flown a multi-rotor with fixed-pitch props in a platform that was really large.”

Johnson and Gonzales started with a vision to transport people for the urban air mobility market, to offer an alternative to transport a person from place to place. “We quickly realized that we needed to start smaller with cargo,” Johnson said. “That’s also why we’re working with the military to use our drones to save lives and get them out of danger.”

Anil Singh, former Yahoo vice president of sales, has invested $300,000 in their company, with another $200,000 promised once they reach a technical milestone.  The founders are looking for more seed investors and mentors interested in their aviation innovation.

“We plan to build these [drones] on an automobile manufacturing scale for more affordable mass production,” Gonzales said. “Our advantage will be our lower cost and our ability to bring this technology over time to a lot of people for widespread adoption.”